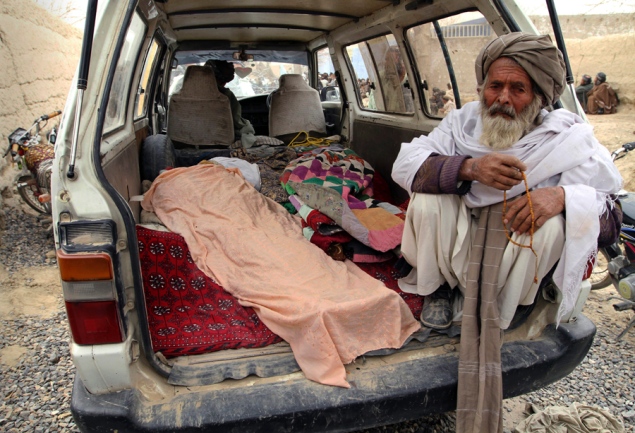 A US soldier has killed more than a dozen civilians in a shooting spree in southern Afghanistan before being detained, officials say.

A member of the Kandahar provincial council who visited the site of the shooting in Panjwai district told Al Jazeera that at least 16 civilians were killed when the soldier left his base early on Sunday morning and opened fire.

The Kandahar governor’s office put the number of killed civilians at 15.

“Eleven members of my family are dead. They are all dead,” Haji Samad, an elder from Panjwai district, told the AFP news agency.

Captain Justin Brockhoff, a spokesman for the NATO-led International Security Assistance Force (ISAF), could not confirm any fatalities in the incident.

“This is a horrific incident, and our thoughts are with the families of the affected. Our initial reports indicate multiple civilians – between four and six- are wounded. Those civilians are receiving care at coalition medical facilities,” he told Al Jazeera.

“At this point we do not have an indication – we can not speculate about the individual’s motives.”

Al Jazeera’s Bernard Smith, reporting from Herat, said the soldier entered three houses near the base and opened fire on civilians.

“We are now being told by the police sources that the US soldier left his base at three o clock this morning. It would have been pitch-black wherever he walked,” he said.

Civilian casualties have been a major source of friction between President Hamid Karzai’s government and the NATO forces in Afghanistan.”The soldier went through three separate houses, shooting at people as they slept in their beds. After the soldier shot these people, he turned himself in.”

Anti-American sentiment had already been running high before news of the latest civilian casualties.

Afghan President Hamid Karzai condemned the shooting rampage and labeled the incident as “intentional murders” and demanded an explanation from the United States.

The victims of the shooting spree, which left up to 16 civilians dead, included nine children and three women, Karzai’s office said in a statement.

Anger gripped the nation after US soldiers burned a large number of copies of the Quran, the Muslim holy book, at a NATO base last month, which the alliance said was “inadvertent”.

At least 41 people were killed in protests that followed the burning.

Najeeb Azizi, a Kabul-based Afghan analyst, said the shooting will have deep repercussions on the already tenuous relations with the US.

“It is a very tragic incident in particular because the Afghan and US governments are trying to sign a strategic agreement for a long term,” he said.

“A very bad message the Afghan people are getting – that if US military remains in Afghanistan beyond 2014 and their attitude and behaviour remains the same – of killing innocent civilians- what will be the consequences, and how will the Afghan people respond to it.”