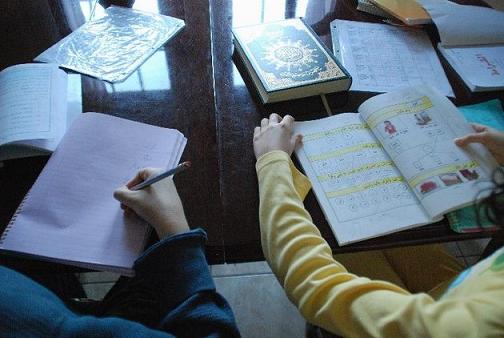 Trying to shield their siblings against teachings that run contrary to their Islamic beliefs, US Muslim families are turning to “home-schooling” to instill their religious and family values in their children.

“Discussion with home-school leaders across the nation indicates that the number of Muslims in home-schooling is expanding relatively quickly, compared with other groups,” Britain D. Ray of the National Home Education Research Institute told The Washington Times on Wednesday, February 22.

Estimates show that Muslim families turn to “home-school” their children instead of sending them to public schools to protect them against teachings seen contrary to their beliefs.

Dr Faheem Younis, an associate professor of medicine at the University of Maryland, said home-schooling children often comes down to instill “family values”.

“If you are trying to shield your child from society, good luck,” he said.

Estimates show that growing numbers of American families “home-school” their children to shield them against teachings seen contrary to their beliefs.

According to 2007 data by the Department of Education, there are estimated 1.5 million students home-schooled in the United States.

Christian students make up the vast majority of all home-schooled children in the country.

Research suggests that home-schoolers more than hold their own academically, even accounting for income and other factors.

“The Muslims looked at that and said, ‘We can do those same things,’” said Cilia Ndiaya, a Muslim woman from Maryland.

However, the practice faces criticism as it could further the Muslim community’s isolation and cultural distance from the American mainstream.

The Maryland woman recalls that she was home-schooled in 1987 because of harassment and assaults by her public schoolmates because of her faith.

“We were called Nazis,” she said.

She authored a colorful book to learn the English alphabet with a story of animals gathering from around the world to bring food to `Eid Al-Adha, one of two major Islamic festivals, which marks the end of hajj.

For example, the page for “E” shows three eggplants and the phrase, “Every elegant elephant from Egypt attended the `Eid day ball, and brought enough enormous eggplants to last until fall.”

“I personally view it as an obligation to God,” she said.

However, the demand for her educating materials is still growing.

“There is no way to meet the need.”

She is not alone.

The Muslim woman encourages her children to learn Arabic in order to be able to read the Noble Qur’an, the Muslim holy book.

For that, they have a master Arabic teacher.

The Germantown mother, who started an online group, Muslims Educating Children at Home, which has grown to 150 members from around the US and the world, also teaches her kids about Islam, spending time to teach the way to live.

“We should do that whether we were home-schoolers or not,” said Yazback, who has a master’s degree in education psychology.

Yazback says that many Muslim families want a structured, morally based education for their children, even if it is not based on Islam.

“There are Muslim families that would feel more safe sending their children to a Christian school than a public school.”