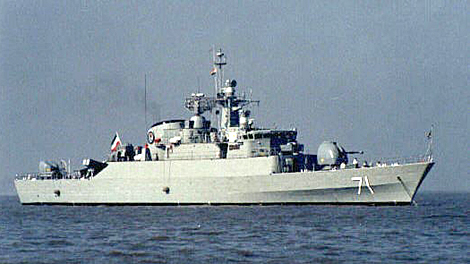 A flotilla of Iranian warships crossed the Suez Canal and docked at the Syrian port of Tartus on Saturday. Iran’s Defense Minister Ahmad Vahidi said the mission displays Iran’s “might” despite 30 years of relentless sanctions.

The flotilla comprised the 18th Fleet of the Iranian navy. The warships would hold exercises and will “train Syrian naval forces under an agreement signed between Tehran and Damascus one year ago”.

“The presence of Iran and Russia’s flotillas along the Syrian coasts has a clear message against the United States’ possible adventurism. In case of any US strategic mistake in Syria, there is a possibility that Iran, Russia and a number of other countries will give a crushing response to the US.”

The activities of the Iranian warships at Tartus (which is also used by the Russian navy) will be keenly watched by the regional countries – Turkey, Jordan, Qatar and Saudi Arabia, in particular. Unconfirmed reports appeared recently that veterans of Iran’s Qods Force (a special unit of the Islamic Revolutionary Guards Corps) might be dispatched to Syria to assist the regime.

Simply put, Iran’s message to Turkey and its Arab allies (which are arming and supporting the Syrian opposition) will be: “Brothers, if you keep doing this, so can we.” There is much food for thought here for these countries – especially the oil monarchies – as they gather in Tunis this coming Sunday for the first meeting of the “Friends of Syria”.

For Turkey, the Iranian warships have arrived in Syria at an awkward time. The Israeli newspaper Ha’aretz reported that the Syrian army had captured 40 Turkish intelligence officers involved in subversive activities and over the past week Ankara has been “conducting intensive negotiations” with Damascus to secure their freedom. But the latter insists in return Turkey ending weapon transfers and infiltrations, and, furthermore, wants Iran to be the mediator. Ha’aretz noted:

Western officials fear that Iranian military presence along with Russian aid could turn Syria into a center of international friction much worse than the struggle inside Syria. They fear that the control over actions in Syria will be taken over by a Russian-Iranian “partnership” which would exclude the European Union and Turkey …

Testing times
However, Tehran is also testing the waters. Under international law, Iran enjoys the right of passage for its warships to pass through Red Sea and the Suez Canal. But Egypt’s equations with Iran remain ambivalent.

Egypt never allowed Iranian warships to cross the Suez until February last year following the overthrow of the Hosni Mubarak regime when, undeterred by the diplomatic pressure from the US and threatening noises from Israel, Cairo allowed an Iranian destroyer to pass through. Israel called it a “provocation”.

But since then, Egypt has been in turmoil and the initial enthusiasm for normalization of ties with Tehran has somewhat waned even as Egypt became dependent on financial help from Saudi Arabia and other Sunni Arab monarchies of the Persian Gulf.

Thus, the permission given to an entire Iranian fleet to cross the Suez last weekend signifies not only Egypt’s thinking toward Iran but also the growing complexities and unpredictability of its relations with the US.

The Egypt-US ties are passing through testing times. A potentially serious row has erupted with a crackdown on several dozen foreign non-governmental organization (NGO) workers by the Egyptian authorities, including 19 American nationals. An undisclosed number of US citizens have taken shelter in the US Embassy in Cairo.

Cairo announced on Saturday that 43 of these suspects who include foreigners (Americans, Serbs, Germans, Norwegians, Jordanians and Palestinians) and Egyptians will be put on trial coming Sunday charged with “establishing unlicensed chapters of international organizations and accepting foreign funding to finance these groups in a manner that breached the Egyptian state’s sovereignty”.

Washington has warned Cairo that the crackdown could harm bilateral ties and hinted that it might cut off military aid amounting to US$1.3 billion annually. Washington apprehends that a public trial could expose the scale of the US interference in Egypt’s internal affairs. Ten prominent American civil-society organizations operating in Egypt have been raided, including the National Democratic Institute, International Republican Institute and Freedom House, which receive US government funding.

The ruling Supreme Council for the Armed Forces in Cairo blames “foreign hands” for the continued unrest in Egypt. The colorful Minister of International Cooperation Fayza Abul-Naga (who is one of the few officials from the Mubarak regime to retain her cabinet seat) is spearheading the campaign against the foreign funding for NGOs.The Muslim Brotherhood has threatened to review Egypt’s 1979 peace treaty with Israel if the US cuts off aid.

Strategic defiance
Suffice to say, Tehran chose the appropriate moment to fathom the Egyptian mind. Cairo’s decision to allow the Iranian flotilla to cross the Suez underscores that it retains the strategic autonomy to reset relations with Iran. (Iranian Foreign Minister Ali Akbar Salehi has publicly expressed appreciation for Cairo’s decision.) Which contains more than a hint to Washington.

Both Cairo and Tehran are underscoring that the Middle East has phenomenally changed and things can never be the same again. The stunning reality is that Egypt and Iran are not exactly seeing eye-to-eye on the Syrian crisis and yet Cairo waved the warships through as they headed for Tartus.

On its part, the most important message Iran could be giving is that neither the heightened standoff with the US nor the avalanche of Israeli threats has succeeded in brow-beating it or will detract from its will and capacity to help its Syrian ally.

However, the danger of an actual confrontation with the US over Syria is very, very unlikely and Tehran never quite estimated that the Barack Obama administration was being swept into a Libya-like intervention in Syria. Tehran, which is well clued in on the ground situation in Syria, remained confident that President Bashar al-Assad was not in any danger.

Yet, Iran’s display of “might” in the eastern Mediterranean will cast its shadows on regional politics. Actually, Lebanon’s Hezbollah and the Amal Movement in a joint statement on Saturday reiterated their alliance with Iran. They said events in Syria were part of the “desperate efforts made by the enemies” to destabilize the country and destroy its national unity and undermine Syria’s firm support for the Palestinian resistance.

(Hezbollah chief Seyed Hassan Nasrallah said this month that Iran rendered “moral, political and financial support in all its available forms since 1982” to the movement. He said Hezbollah scored the “most prominent Arab victory” over Israel, this victory couldn’t have been achieved without Iranian support and “Syria had a big role in the victory”.)

At any rate, the display of “might” in the Mediterranean, which is historically a “Western lake”, is bound to carry resonance within Iran itself. Such displays appeal to the Iranian people’s sense of national honor and in turn helps consolidate public opinion, which is particularly important for the regime as the country approaches a crucial parliamentary election in March in which the calculus of power is expected to decisively shift and the alchemy of the Majlis to transform radically.