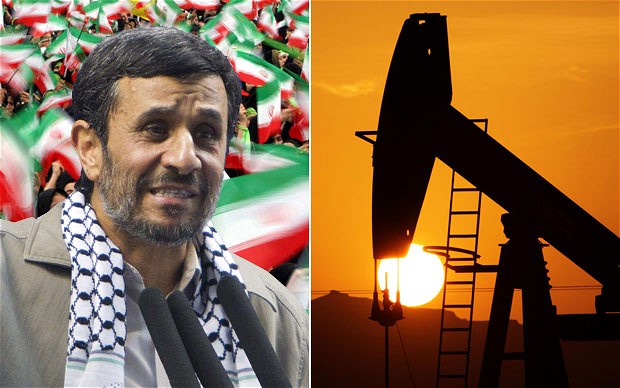 Last week, the Tehran Times noted that the Iranian oil bourse will start trading oil in currencies other than the dollar from March 20. This long-planned move is part of President Mahmoud Ahmadinejad’s vision of economic war with the west.

“The dispute over Iran’s nuclear programme is nothing more than a convenient excuse for the US to use threats to protect the ‘reserve currency’ status of the dollar,” the newspaper, which calls itself the voice of the Islamic Revolution, said.

“Recall that Saddam [Hussein] announced Iraq would no longer accept dollars for oil purchases in November 2000 and the US-Anglo invasion occurred in March 2003,” the Times continued. “Similarly, Iran opened its oil bourse in 2008, so it is a credit to Iranian negotiating ability that the ‘crisis’ has not come to a head long before now.”

Iran has the third-largest oil reserves in the world and pricing oil in currencies other than dollars is a provocative move aimed at Washington. If Iran switches to the non-dollar terms for its oil payments, there could be a new oil price that would be denominated in euro, yen or even the yuan or rupee.

India is already in talks with Iran over how it can pay for its oil in rupees.

Even more surprisingly, reports have suggested that India is even considering paying for its oil in gold bullion. However, it is more likely that the country will pay in rupees, a currency that is not freely convertible.

India and Iran have agreed – but not yet started – to settle 45pc of payments for Iranian oil in rupees. Iran will then use the currency to buy imports from India.

New Delhi currently spends about $12bn (£7.6bn) on Iranian oil each year, importing 12pc of the country’s needs from the country.

India pays for its oil in dollars, routed through a bank in Turkey after a previous mechanism was shut down in 2010. The Indian government has been resisting calls to stop importing oil from the pariah state.

“There have been problems with regard to Iran’s nuclear programme,” Manmohan Singh, India’s prime minister, said on Friday. “We sincerely believe that this issue can be and should be resolved by giving maximum scope to diplomacy.”

All of this means that the EU ban on Iranian oil imports, which comes into force on July 1, could hit Europe harder than it does Iran.

The country currently supplies 500,000 barrels of oil per day to the EU and there is a potential oil price spike in the offing should Iran pre-emptively stop the flow of oil to Europe, which it has threatened to do.

This could be disastrous to businesses that are already finding the economic climate tough.

“While Iran may be able to find markets for much of its oil output in Asia, the alternative sources of supply to Europe are still unclear,” Caroline Bain, a commodities analyst at the Economist Intelligence Unit, said.

“Until the supply outlook stabilises, the oil price is expected to continue to reflect this uncertainty rather than the likelihood of lower growth in global oil consumption in 2012.”

The worries are already sending ripples of concern around the world.

“While we have been listing the Iranian situation as a source of upside risk for a decade, there are some new factors that can make for a far more dangerous outcome, as the current drift of policy on both sides is creating the risk of a significant escalation,” Sudakshina Unnikrishnan, an analyst at Barclays Capital, said.

So the EU ban could be counter productive, as it keeps the oil price high. However, as long as President Ahmadinejad’s economic war doesn’t.