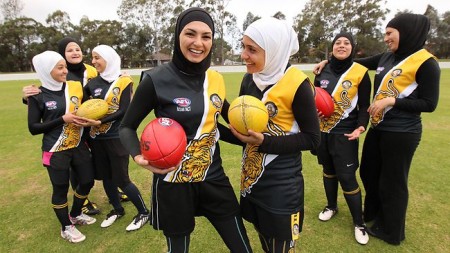 The 2012 AFL debut of the GWS Giants is the culmination of efforts by the powerful, cashed up body that administers Aussie Rules to make inroads into the rugby league-obsessed, poor and predominantly refugee and migrant neighbourhoods on the “wrong” side of the tracks in Australia’s largest city.

I recently produced an episode of ABC Radio National’s Encounter that discussed how a religiously diverse part of Australia juggles its negative reputation with a growing, strategically important population. It’s a population the sport of Aussie Rules football is trying to reach out to, but whose identity is wrapped up in the “rival” football code of rugby league.

I am interested in the collision of sport and faith. Academically, the nexus between sport and religion in Australia is under-researched. This topic has been looked at in other national contexts such as South Korea and the United States. It has also been explored through the lens of participation – and barriers to participation – in sport by Muslim women.

In the media, the notion of sport and religion being intertwined is usually reduced to narratives about the impact of the practice of faith on an individual’s sport and life. Some examples of this might include articles listing the most religious US athletes or stories about the challenges sports stars who are Muslim, or who have converted to Islam, face with the fasting month of Ramadan. One such sportsman – hometown boy and rugby league legend Hazem el Masri – is featured on the program.

But it could be argued that affiliation with a sport or a team runs so deep as to form a part of someone’s religious or cultural identity. My premise is that following an NRL team is a crucial part of the lived experience of Australians of Muslim background in suburbs such as Lakemba, Auburn, or Punchbowl.

In a diverse part of Sydney, which also happens to be one of Australia’s fastest growth corridors (and therefore a politically and economically strategic area), to be a good Muslim and a proper Australian can mean following one of the local rugby league teams.

This is why the AFL’s exercise (or experiment, if you want, albeit a very expensive one) in introducing a second Aussie Rules team for Sydney’s “westies” is such a fascinating turn of events. In the lead-up to the Giants’ debut, the league has thrown everything but the kitchen sink at the area: money to build new stadiums, programs to get people interested in playing Aussie Rules, and time and resources getting involved in community events.

I spoke to the man tasked by the AFL with making Aussie Rules football a part of the lives of the people of Greater Western Sydney. He told me both the club and the league are consciously marketing to the rugby league-obsessed Muslims of Western Sydney by catering to their religious-specific needs.

In the process, a gender dimension is revealed, as young Sydney women of Lebanese Muslim background defy cultural norms by playing – in headscarves – a rough physical contact sport new to their community. One of the co-founders of western Sydney’s first women’s Aussie Rules team told me playing the sport is a delicate juggling act between embracing something new and accommodating a culture which she says demands a lot of its young women.

The documentary film Fordson: Faith, Fasting, Football looks into sport (specifically American football) and Muslim identity in the United States after 9-11. “On a football field,” says an Arab-American student at Fordson High School, “it’s time for football – no matter what religion you are, knock them down, make a play.”

That sentiment was echoed by the people I spoke to in western Sydney. “Sport unifies people,” El Masri told me.

The AFL’s community engagement manager for Greater Western Sydney, Ali Faraj, had a similar view. It doesn’t matter which type of “footy” we talk about, Faraj told me, because it’s “about giving chances for young refugees and new migrants to feel a better sense of Australian culture”.

The paradox in Australia is that while Aussie Rules – a sport often described as a religion – explicitly reaches out to a religiously defined demographic, on the field issues of faith tend to vanish.