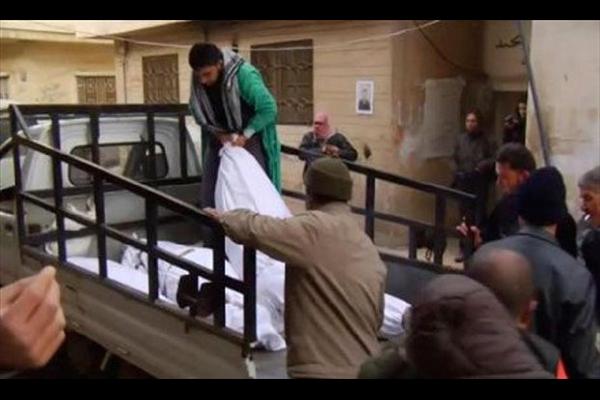 Scores of people have been killed in the fifth straight day of shelling in the beseiged Syrian city of Homs, according to opponents of Bashar al-Assad‘s regime.

The continuing bombardments of the districts of Bayadah, Baba Amr, al-Khaldiyeh and Karm el-Zeytoun caused many deaths, according to the UK-based Syrian Observatory for Human Rights.

Omar Shaker, an activist in Baba Amr, said the district was under “very intense shelling” by tanks, mortars, artilleries and heavy machine guns. He said he had counted five bodies.

Other reports suggest 47 civilians died early on Wednesday in the government’s continuing attempts to subdue opposition areas. At least 150 people have died in the last two days, activists and oppostion sources have told Reuters.

One activist, Muhammad Hassan, said by satellite phone: “Electricity returned briefly and we were able to contact various neighbourhoods because activists there managed to recharge their phones. We counted 47 killed since midnight.” Hassan said the bombardment had intensified in Sunni Muslim neighbourhoods that have risen up against Assad.

“Mortar and rocket fires have subsided but heavy machine guns and anti-aircraft guns are still strong … Tanks are in main thoroughfares in the city and appear poised to push deep into residential areas,” Hassan said.

The official state news agency said “armed terrorist groups” had attacked police roadblocks in Homs and fired mortar bombs at the city, with three falling on the Homs oil refinery. It gave no details of any damage.

Inhabitants of the besieged city told the Guardian they were under “genocidal attack” from a regime apparently deaf to international opinion and determined to “bomb, starve and shoot” them into submission.

The latest assault followed a huge bombardment on Tuesday night, when activists reported rockets raining down every few minutes, and helicopters and fighter planes circling overhead. They said Syrian army tanks had encircled opposition-held suburbs in preparation for what they feared was a final, deadly ground assault.

“The regime didn’t expect us to continue our struggle against them,” activist Karam Abu Rabea said. “They didn’t think we would persist. So now it is using its last card: it is the genocide card.”

Rabea said the regime was deliberately attempting to starve families in rebel-controlled districts. Army snipers had been positioned on the main roads, he added, and were able to shoot anyone who ventured out on the smaller, intersecting side roads. No one could escape, he said. “They are targeting the vital installations of the city: bakeries, the hospital, mosques … The Assad regime is trying to destroy Homs completely.”

His comments came as the Russian foreign minister, Sergei Lavrov, held talks in Damascus with Assad after Russia and China vetoed a UN security council resolution on Saturday that had been designed to stop the bloodshed.

The veto prompted global condemnation, with the US closing its embassy on Damascus on Monday and Britain recalling its ambassador for consultations.

On Tuesday, the diplomatic exodus from Damascus continued, with France and Italy withdrawing their ambassadors. Six Gulf states – Bahrain, Kuwait, Oman, Qatar, Saudi Arabia and the United Arab Emirates – also pulled their envoys out and expelled Syrian ambassadors from their own countries.

Witnesses inside the city said there were ominous signs of preparations for a final assault. Eleven months after Syria‘s uprising began, with Homs as its epicentre, 13 Russian-made T-72 tanks had penetrated as far as Tripoli Street, south-east of Baba Amr, witnesses said.Up to 12 tanks surrounded al-Khaldiyeh. The Syrian army had entered via areas loyal to the regime, the witnesses added.

Another activist, Sufian, said security forces had captured a hospital in al-Halemei. The injured people were taken away to prison. The last field hospital in Baba Amr was bombed on Monday, he said. “We lost 10 people when we tried to evacuate it.” “We are using kitchen knives for surgery. All the field hospitals have been targeted. We are relying on domestic medicine cabinets to treat the injured. We don’t have any blood for donations, or oxygen. We are calling on help from the whole world. We need urgent help opening the blockade of Homs.”

Activists said opposition fighters from the Free Syrian Army (FSA) were no match for their well-armed government adversaries, equipped with tanks, fighter planes and Russian heavy weapons. “The soldiers who defected from the army only have Kalashnikovs. How can you face a battalion with a Kalashnikov?” Sufian asked. Amid the horror, activists expressed optimism. They said that despite the continuing massacre, in which Homs has become Syria’s bloody counterpart to Misrata in Libya, they still expected Assad’s regime to crumble. Rabea said that after this weekend’s failure to find a diplomatic settlement, the only way the world could stop the slaughter in Syria was to arm the FSA.

“The international community needs to give the FSA money,” Rabea said. “And weapons. We need the Red Cross here, we need a no-fly zone, and we need safe havens so that people can flee.

“We blame Russia and China mainly for all the killing happening in the city now. Our crime is that we wanted freedom.”