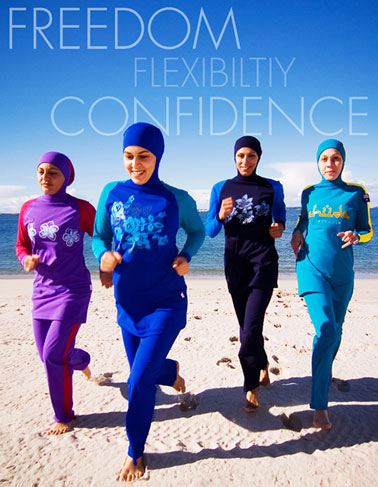 The word “Burqini”, used to describe the full-length swimming costume for Muslim women invented and developed by Sydney designer Aheda Zanetti, is the favourite to be named Australia’s Word of the Year 2011 by Macquarie Dictionary.

It has thus far received the most votes in a competition run each year by  the wordsmiths at Macquarie Dictionary that assess which new words in the Australian lexicon will make it into their latest addition. They assess whether a word has currency in the community and if it does, the word is given an official definition and put into the online dictionary.

To help publicise the dictionary and for a bit of fun, the public is also invited to vote on what they believe should be the word of the year.

Burqini has been defined as:

Other words we thought MuslimVillage.com readers might identify with were  guy liner – eyeliner when used by a man  (think Kohl), food coma – a feeling of lethargy brought on by eating a large amount of food, especially rich food that is difficult to digest (think Ramadan) and computer shoulder – a neck and shoulder disorder causing pain and impairment of movement, brought about by poor posture, tension, and long hours spent at a computer (think everyday!).

Voting for the competition closes on midnight January 27 2012.
To vote for burqini (you will find it under the fashion category) or any of the other nominated words from another 17 categories, go to this link:  Macquarie Word of the Year 2011 voting form