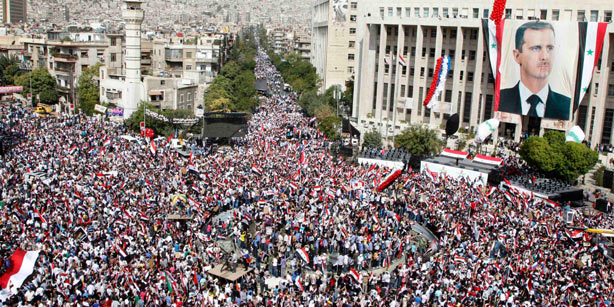 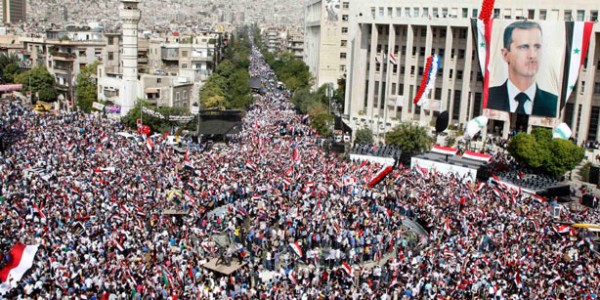 Assad’s popularity, Arab League observers, US military involvement: all distorted in the west’s propaganda war
A demonstration in support of Bashar al-Assad, the Syrian president, in Damascus. ‘Some 55% of Syrians want Assad to stay, motivated by fear of civil war.’
Suppose a respectable opinion poll found that most Syrians are in favour of Bashar al-Assad remaining as president, would that not be major news? Especially as the finding would go against the dominant narrative about the Syrian crisis, and the media considers the unexpected more newsworthy than the obvious.
Alas, not in every case. When coverage of an unfolding drama ceases to be fair and turns into a propaganda weapon, inconvenient facts get suppressed. So it is with the results of a recent YouGov Siraj poll on Syria commissioned by The Doha Debates, funded by the Qatar Foundation. Qatar’s royal family has taken one of the most hawkish lines against Assad – the emir has just called for Arab troops to intervene – so it was good that The Doha Debates published the poll on its website. The pity is that it was ignored by almost all media outlets in every western country whose government has called for Assad to go.
The key finding was that while most Arabs outside Syria feel the president should resign, attitudes in the country are different. Some 55% of Syrians want Assad to stay, motivated by fear of civil war – a spectre that is not theoretical as it is for those who live outside Syria’s borders. What is less good news for the Assad regime is that the poll also found that half the Syrians who accept him staying in power believe he must usher in free elections in the near future. Assad claims he is about to do that, a point he has repeated in his latest speeches. But it is vital that he publishes the election law as soon as possible, permits political parties and makes a commitment to allow independent monitors to watch the poll.
Biased media coverage also continues to distort the Arab League’s observer mission in Syria. When the league endorsed a no-fly zone in Libya last spring, there was high praise in the west for its action. Its decision to mediate in Syria was less welcome to western governments, and to high-profile Syrian opposition groups, who increasingly support a military rather than a political solution. So the league’s move was promptly called into doubt by western leaders, and most western media echoed the line. Attacks were launched on the credentials of the mission’s Sudanese chairman. Criticisms of the mission’s performance by one of its 165 members were headlined. Demands were made that the mission pull out in favour of UN intervention.
The critics presumably feared that the Arab observers would report that armed violence is no longer confined to the regime’s forces, and the image of peaceful protests brutally suppressed by army and police is false. Homs and a few other Syrian cities are becoming like Beirut in the 1980s or Sarajevo in the 1990s, with battles between militias raging across sectarian and ethnic fault lines.
As for foreign military intervention, it has already started. It is not following the Libyan pattern since Russia and China are furious at the west’s deception in the security council last year. They will not accept a new United Nations resolution that allows any use of force. The model is an older one, going back to the era of the cold war, before “humanitarian intervention” and the “responsibility to protect” were developed and often misused. Remember Ronald Reagan’s support for the Contras, whom he armed and trained to try to topple Nicaragua’s Sandinistas from bases in Honduras? For Honduras read Turkey, the safe haven where the so-called Free Syrian Army has set up.
Here too western media silence is dramatic. No reporters have followed up on a significant recent article by Philip Giraldi, a former CIA officer who now writes for the American Conservative – a magazine that criticises the American military-industrial complex from a non-neocon position on the lines of Ron Paul, who came second in last week’s New Hampshire Republican primary. Giraldi states that Turkey, a Nato member, has become Washington’s proxy and that unmarked Nato warplanes have been arriving at Iskenderum, near the Syrian border, delivering Libyan volunteers and weapons seized from the late Muammar Gaddafi’s arsenal. “French and British special forces trainers are on the ground,” he writes, “assisting the Syrian rebels, while the CIA and US Spec Ops are providing communications equipment and intelligence to assist the rebel cause, enabling the fighters to avoid concentrations of Syrian soldiers …”
As the danger of full-scale war increases, Arab League foreign ministers are preparing to meet in Cairo this weekend to discuss the future of their Syrian mission. No doubt there will be western media reports highlighting remarks by those ministers who feel the mission has “lost credibility”, “been duped by the regime” or “failed to stop the violence”. Counter-arguments will be played down or suppressed.
In spite of the provocations from all sides the league should stand its ground. Its mission in Syria has seen peaceful demonstrations both for and against the regime. It has witnessed, and in some cases suffered from, violence by opposing forces. But it has not yet had enough time or a large enough team to talk to a comprehensive range of Syrian actors and then come up with a clear set of recommendations. Above all, it has not even started to fulfil that part of its mandate requiring it to help produce a dialogue between the regime and its critics. The mission needs to stay in Syria and not be bullied out.
Tags: Arab League assad demonstration President Assad Syria