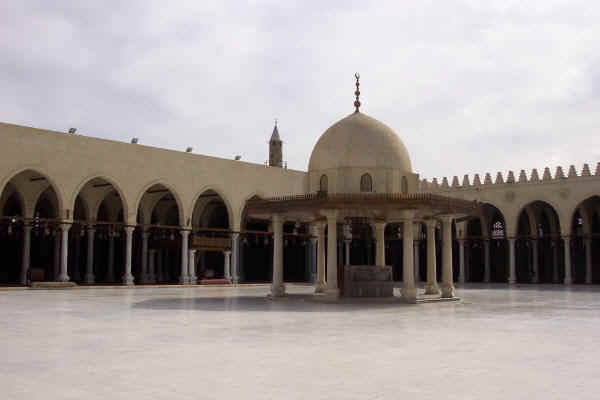 CEDAR RAPIDS, IOWA – The oldest standing mosque in the US is not an imposing building. It lies in a quiet residential neighbourhood just north of downtown Cedar Rapids.

The wooden building with its little green dome is on the National Registrar of Historic Places. But what is considered the Mother Mosque of America, built in 1934, is more than a historical curiosity: it is testament to the vitality of one of the oldest Muslim communities in the US, one rooted in Iowa’s second-largest city, which has a population of about 127,000.

With American Muslims under more scrutiny since the September 11 attacks, perhaps the mosque’s real significance today is not its history but its location, said Albert Aossey, co-founder of the Midwest Islamic Association.

“Most people don’t think of Muslims in the heartland. But this is where they first came looking for a better life.”

Abbas Habhab blazed the trail. The young man from Kfarhouna, then Greater Syria, in 1888, became the first documented Muslim in Iowa, and over the next seven years he brought his three brothers, Musa, Yousef and Ali.

Lured by the promise of land – under the Homestead Act of 1862, new immigrants could secure 160 acres of land for a nominal fee if they fulfilled certain requirements for five years, including growing crops and building dwellings – the brothers started as farm hands, peddlers and at whatever else work they could find. They worked hard and long, said Paul Habhab, 41, Musa’s grandson. They were “hard men”, he said.

Two generations later, Mr Habhab is managing director of Islamic Services of America (Isa), which was founded by his father, also Paul, in 1975. Isa is one of a handful of American companies that provides internationally recognised halal certification for the food, pharmaceutical and cosmetic industries, a US$2.3 billion (Dh8.4bn) global industry.

Together with another Cedar Rapids company, Midamar – which was founded by Albert Aossey’s younger brother, Bill, and is America’s largest distributor of halal food – Isa has given the Muslim community in Cedar Rapids a global reach that belies its humble beginnings.

“It’s a typical American story,” said Mr Habhab, who estimated the size of the community at 2,500. “My grandfather shovelled coal for a dime a day. He worked hard and that’s why we are where we are today.”

Evidence of the Muslim-Arab connection is dotted around Cedar Rapids. Apart from the city’s three mosques, there is the inevitable Aladdin restaurant, specialising in Mediterranean food. There are retail outlets with names such as Kamal’s Rug Store.

As a measure of the degree to which the Muslim community is woven into the fabric of life here, the Midwest Islamic Association’s name appears on a plaque that notes the otherwise Christian-church dominated list of partners to the Ecumenical Community Center, a faith-based charity in the centre of the city.

Albert Aossey, 73, keeps an office there. He and his two brothers, Joe and Bill, founded the Midwest Islamic Association as a non-profit organisation in the 1970s in part to oversee the renovation of the Mother Mosque in 1978, when it had fallen into disrepair. Their efforts ensured that the Mother Mosque avoided the fate of the first mosque to be built in the US, in 1929 in North Dakota, which was torn down in the 1970s.

Mr Aossey’s father, Yahya, was also originally from what is now southern Lebanon. In 1907, at the age of 16, Yahya came to Iowa. He spent his first months with a German family who renamed him William. Speaking no English, William realised only later that the language he had begun to learn from them was German.

He moved to Cedar Rapids in the 1920s where he opened his own general store. In 1934, he helped build the Mother Mosque with a handful of others.

In 1948, William Aossey donated 10 acres he had acquired over the years for a Muslim graveyard – the National Muslim Cemetery – the first of its kind in America. It was dedicated in part to fill a growing national as well as a local need, and in part in recognition of those who had died fighting for the US in the Second World War.

“Not bad for a man who never learnt … to read or write,” said Mr Aossey after a short prayer over his father’s grave, which, like all the others in the cemetery, faces toward Mecca.

Four of Mr Habhab’s uncles fought in the 1939-45 conflict. His father fought in Korea. And Mr Habhab bristles at the media attention the American Muslim community has received after the September 11 attacks.

Ten years after the twin towers came down, many Americans continue to view Islam and Muslims with suspicion.

In September, a Brookings Institution/Public Religion Research Institute poll, found that 47 per cent of people in the survey believe Muslim values are at odds with American values. And almost one in three said they believed American Muslims want to impose Sharia in the US.

Overt controversy about Islam has largely bypassed Cedar Rapids. There was no public attack, no mosque was defaced and there was no rally against Muslims after September 11, 2001, said Lyle Muller, editor of The Gazette, Iowa’s second-largest daily newspaper. This, he added, was in large part because the Muslim community is part of the “fabric of the city”.

“You have [Muslim] business people and folks in your area that are interacting with you as Cedar Rapidians and Iowans, and that’s how they are viewed.”

But Mr Muller also acknowledged that it hasn’t all been smooth sailing. Last year, plans for a Muslim Youth Camp at Coralville Lake south of Cedar Rapids had to be abandoned after both local and national opposition to the idea.

And Mr Habhab said there continued to be “deep ignorance” about Islam in spite of the heavy media coverage after the September 11 outrages, but concedes that those attacks also forced American Muslims – of whom many used to be what he called “part-time Muslims” – to explore their own faith. “Suddenly all we saw on TV was martyrdom, suicide missions, 73 virgins, Shiite, Sunni. And a lot of part-time Muslims were like, ‘Huh? This is what I believe?'”

The result, he said, was an inward exploration that actually increased people’s attachment to their faith.

That has given rise to a reassertion of a Muslim identity among American Muslims. Where his grandfather Musa became Moses at Ellis Island, the port of call for new immigrants in the 19th century, Mr Habhab’s children – Jameela, Raya and Tarek – are closing a circle with their names.

“They used to anglicise their names to fit in, like all communities did,” Mr Habhab said. “Now, there’s a sense of returning to our roots.”