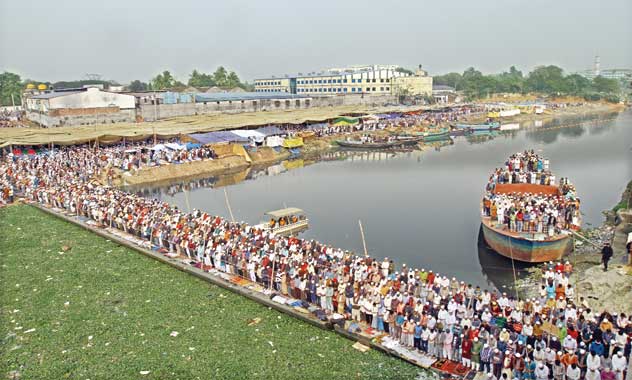 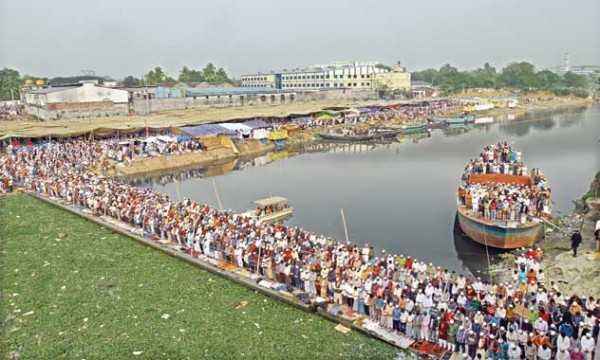 GAZIPUR – Hundreds of thousands of Muslim devotees have gathered on the banks of Turag River outside the Bangladeshi capital on Friday, January 21, to call for peace and a revival of Islamic tenets in the world’s second largest congregation after hajj.

“This great congregation is playing an important role in spreading Islamic morals and the teachings of ‘Sunnah’ among the residents of the world,” Bangladeshi President Zillur Rahman said in a statement on the occasion cited by Bangladesh’s online newspaper bdnews24.com.

“To enforce peace, unity, solidarity and brotherhood in the Muslim world, the Biswa Ijtema is really important,” he added.

“Everyone should be inspired by great Islamic ideals and devote themselves to the welfare of humanity.”

Dressed in traditional Islamic robes and prayer caps, a sea of the faithful began streaming toward the venue of the World Muslim Congregation on the banks of the river Turag.

Friday’s gathering was kicked off by the World Congregation of Muslims in the morning on the sandy bank of the Turag River.

The first day of the gathering was inaugurated after Fajr prayers with a lecture by Pakistani Hazi Abdul Wahab.

The first phase will run through to Jan 15 and the second one from Jan 20 to Jan 22, during which the faithful pray and listen to religious scholars.

Many of the faithful traveled by dangerously overcrowded buses and ferries and endured long delays and dense fog to reach the site from far-flung rural villages.

Bishwa Ijtema was first held in the 1960s by Tabliq-e-Jamaat, a political group that urges people to follow the Islamic teachings in their daily lives.

Witnessing increasing appeal over the years among those who cannot afford to go to Makkah for the hajj, the Biswa Ijtema moved in 1966 to be held at the bank of Turag in Tongi from such date on.

Attended by a large number of Muslims from different world countries, the Bengali government intensified security measures in the Ijtema ground.

“Through the foreign guests attending the Ijtema, our long cherished non-communal mentality, natural mildness, hospitality and tolerance will reach the world,” Prime Minister Sheikh Hasina said in her statement on the gathering cited by bdnews24.com.

A large number of police have been deployed around the venue to ensure security of the devotees.
Other personnel from the elite Rapid Action Battalion (RAB) were also deployed in the area.

RAB helicopters will hover in the sky in the six days of the two-phase Ijtema, deputy commander of RAB-1 major Mohammad Nishadul Islam Khan said.

Bishwa Ijtema is the second largest Muslim congregation in the world after hajj.

With a population of 144 million, Bangladesh is the world’s third-largest Muslim-majority nation.