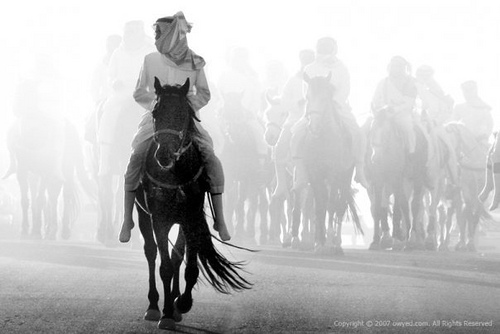 Even the devil, though, can quote scripture. In other words, anyone can take a verse of scripture out of context from the Bible or the Qur’an and make it seem to represent that religion.

For example, in Psalm 137 we read “Happy is the one who takes your babies and smashes them against the rocks!” No one with any sense would suggest that this is the message of either Judaism or Christianity. In the same way, to misquote from the Qur’an is to distort the message of Islam.

Indonesia has the world’s largest Muslim population. In fact, the number of Muslims in Indonesia is more than the whole population of all the Arab countries put together. Arabs count for only around eighteen per cent of all Muslims. By far the greatest concentration of the world’s 1.3 billion Muslims live in Southeast Asia. Islam has been deeply rooted there for centuries.

Those who beat the drum of Islam being spread by the sword fail to mention Southeast Asia, since it does not fit with their agenda. No Muslim armies ever went there. In fact, the story of Islam being brought there is quite marvelous and well worth telling.

It was brought not by soldiers, but by merchants. The honesty and integrity of these first few Muslim merchants, whose names are celebrated as part of Indonesia’s history, so impressed the people that they wanted to be like them. In closing up their businesses each day at prayer times and in the fair and just way they dealt with their customers, these Muslim merchants drew many to Islam. Their message and their fame spread quickly until millions had embraced their religion.

Soon after the death of Prophet Mohamed (Peace Be Upon Him) and the death of Abu Bakr, the first Caliph, the Muslim faithful were led by Caliph Umar, one of the Prophet’s Companions.
When Umar entered Jerusalem at the head of a Muslim army in 638 CE, just six years after the Prophet’s death, he entered the city on foot, as a gesture of humility in a city sacred to Muslims, Christians, and Jews. There was no bloodshed. There were no massacres or forced conversions.

On the contrary, those who wanted to leave were allowed to do so with all their possessions. Those who wanted to stay were granted protection for their lives, their property, and their places of worship. Umar very famously declined to pray one of the five daily prayers in the Church of the Holy Sepulchre, lest in years to come Muslims might try to turn it into a mosque in his memory. Instead, Umar cleansed the so-called Temple Mount with rose water and built a small mosque there, where the Dome of the Rock now stands.

All of this is in marked contrast to what happened when  Crusader armies later took Jerusalem. Seventy thousand men, women and children were slaughtered. Any remaining Muslims and Jews were driven out. When the city was recaptured by Salah Ad-Din (Saladin), the Christian inhabitants were granted protection and were escorted to safety by the Muslim army.
But those who have a different aim would have us believe that it is Islam that is cruel.

When Prophet Mohamed (Peace Be Upon Him) finally entered Makkah at the head of a Muslim army in AH 8, he did so not to force the Makkans to convert, but because they had violated their peace treaty with the Muslims. The Prophet entered with great humility, ordering that there should be no fighting or bloodshed. Instead, he forgave all those who had opposed him and the growth of Islam for so many years. Those who wanted to leave were allowed to do so. The whole city, so impressed by the men they had fought against for so long, converted to Islam.

Another great example that many deliberately choose to ignore is that of the Muslim presence in southern Spain for nearly eight centuries. Described as Islam’s Golden Age, this was a time when the Islamic civilisation flourished. It was centuries ahead of northern Europe in the way arts and sciences were encouraged and in the way cities and towns were advanced well beyond anything in Germany, France, or England at the same time.

During this Golden Age, the rights of Christians and Jews were respected and honoured, and many of them rose to high positions at court. When the Catholic monarchs Ferdinand and Isabella reconquered southern Spain, Muslims and Jews were either forced to convert to Christianity or were put to death. Mosques and synagogues were desecrated and destroyed. The excesses of the Spanish Inquisition had begun. The Jewish community that now lives in modern-day Turkey celebrated the five hundredth anniversary of its presence in Turkey a few years ago. It was to the Ottoman Empire that the Jews had fled when they were expelled from Catholic Spain, in fear of their lives.

We might similarly ask if Islam was taken to America by the sword, or taken to Denmark or Ireland or Poland by the sword. It wasn’t.

So what about North Africa? What about the Muslim armies that swept across North Africa, forcing all in their way to become Muslim or die? The army of Muslim general `Amr ibn Al-`As entered Egypt in 642 CE. He built in Cairo the first mosque in the whole of Africa. He also ordered that the Muslims had a duty to protect the rights of the Christians living in Egypt.

The people of Egypt weren’t forced to become Muslim. It was to be another two centuries before the population of Egypt became Muslim. To this day, there are many millions of Christians living here. For fourteen centuries they have lived in peace with their Muslim neighbours, a model for inter-religious harmony elsewhere in the world. It is a pity that there are voices abroad telling lies they would never tell in Egypt and causing mischief and confusion about what things are really like.

Islam does not condone violence against innocent people. Perhaps those driven to violence are being mistaken for Islam itself. If individual Muslims present a distorted image of Islam, all Muslims in the world must not be labeled as violent. When IRA violence was at its height in Northern Ireland and Britain in the 1970s and 1980s, no one spoke of Christian terrorists. The ETA bombing campaign in northern Spain is not labeled Catholic.

Prophet Mohamed (Peace Be Upon Him) did not ever give the command to spread Islam by the sword. The Prophet (peace be upon him) left behind a legacy of worshiping one God and of respecting all people of good will, even though his detractors try repeatedly to distort the facts and to paint a different picture.

There are powerful forces who benefit from an image of Islam and Muslims as violent. They manage to trick the world into seeing them as under threat and surrounded by terrorists, even claiming they have no partner for peace. Maybe the voices of Egyptians, then, can help to show the real picture to a world that has been hoodwinked into believing something that is not true. In playing his or her own small part, each Egyptian can tell the world what Islam is really like.