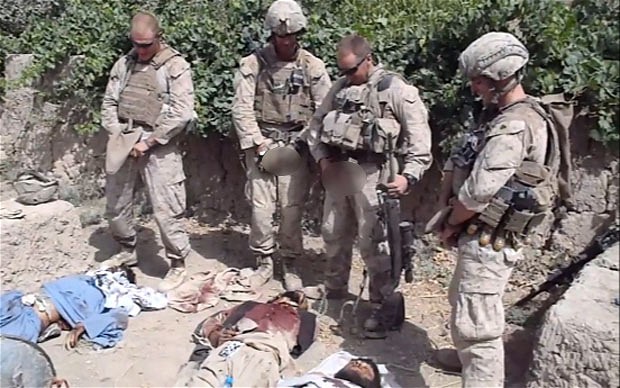 The US Marine Corps says it will investigate a video posted on the internet which appears to show US soldiers in Afghanistan urinating on corpses.

In a statement issued on Wednesday after the footage came to light, the corps said the matter would be fully investigated.

“While we have not yet verified the origin or authenticity of this video, the actions portrayed are not consistent with our core values and are not indicative of the character of the marines in our corps,” the statement said.

John Kirby, a Pentagon spokesman, said: “Regardless of the circumstances or who is in the video, this is… egregious, disgusting behavior, unacceptable for anyone in uniform.

“It turned my stomach,” he added.

The video, which was first posted on the Live Leak website, shows four men in military uniforms urinating on three bloodied bodies on the ground, apparently aware that they were being filmed.

One of them jokes: “Have a nice day, buddy.” The other makes a lewd joke about a shower.

The multinational security force in Afghanistan, ISAF, as well as the country’s government, strongly condemned the actions portrayed in the video.

“The government of Afghanistan is deeply disturbed by a video that shows American soldiers desecrating dead bodies of three Afghans,” said a statement from Afghan President Hamid Karzai’s office on Thursday.

“This act by American soldiers is simply inhuman and condemnable in the strongest possible terms.

“We expressly ask the US government to urgently investigate the video and apply the most severe punishment to anyone found guilty in this crime.”

In a statement on Thursday, the NATO-led international coalition in Afghanistan called the actions depicted in the video “inexplicable and not in keeping with the high moral standards” it said were expected of co-alition forces.

It said the video appeared to show a “small group of U.S. individuals, who apparently are no longer serving in Afghanistan”.

In a statement, the Taliban said the incident was “against all international human rights” but “not the only example of the horrific actions that the Americans have done in Afghanistan”.

“American soldiers are trained to spread horror and this is one of the examples,” the Taliban said.

However, the group’s statement added that the incident would not affect negotiations with the US after US officials said Washington would send an envoy to Afghanistan to prepare the ground for direct peace talks.

About 20,000 marines are deployed in Afghanistan, mostly in Kandahar and Helmand provinces in the south of the war-ravaged country.

The video could aggravate anti-US sentiment in Afghanistan after a decade of a war that has seen other cases of abuse.

The US military has been prosecuting soldiers from its army’s 5th Stryker Brigade on charges of murdering unarmed Afghan civilians while deployed in 2010 in Kandahar province.

In that case, photographs published last March by two magazines – Der Spiegel and Rolling Stone – showed soldiers posing with the bloodied corpse of an Afghan boy they had just killed.

A Muslim civil rights group in the US condemned the alleged desecration of corpses in a letter to Leon Panetta, the US defence secretary.

“Any guilty parties must be punished to the full extent allowed by the Uniform Code of Military Justice and by relevant American laws,” the Council on American-Islamic Relations said in the letter, a copy of which was sent to media organisations.