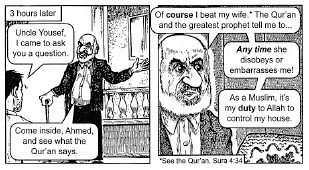 Leaders of Canberra’s Muslim community were surprised and saddened by offensive anti-Islamic pamphlets distributed to homes throughout Queanbeyan over the Christmas holidays.

Householders in Queanbeyan received the material depicting a Muslim man physically abusing a woman and a child and an Islamic elder condoning the violence as acceptable to his faith.

One local Muslim leader has questioned the legality of the material and said it was un-Christian to distribute such offensive literature.

The pamphlets were published by Chick Publications, a United States-based evangelical company.

The company has been listed as a hate group by US civil rights organisations, and it is believed they were delivered to Queanbeyan homes by hand. The distributors did not identify themselves and several church groups in the town denied responsibility.

The vice-president of the Islamic Society of the ACT, Yusef Mansuri, said he was unsure of the legality of such material, but that he had not experienced anti-Islamic sentiment in Canberra or Queanbeyan.

”We are sad about it, we don’t agree with the booklet or its logic, but that said, Australia is a democratic country and people are entitled to express themselves,” he said.

The pamphlet, entitled Is Allah Like You?, depicts an Islamic man who abuses his wife and son until he converts to Christianity and learns the error of his ways.

Mr Mansuri said while he had not come across the anti-Islamic Chick Publications booklets before, he was aware of similar pamphlets targeting Hinduism and Catholics.

”They have a very narrow view on the message of Jesus Christ,” he said.

”We would like to emphasise that Jesus Christ is our beloved prophet. I don’t think he would have condoned such behaviour, especially at this time of year.”

Mr Mansuri extended an invitation to anyone who was interested in learning more about Australia’s Islamic community to attend an open day at their local mosque.

According to Chick Publications’ website, its founder Jack Chick converted to Christianity nearly 50 years ago and was inspired to draw cartoons to convert other non-believers to the faith.

Brisbane woman Marie Hunter’s organisation, ELE Trust, was the sole distributor of Chick tracts until they were made available direct to the public via mail order.

She said that a number of different church groups used various Chick Publications in Australia, but as none had identified themselves on the Queanbeyan pamphlets it was likely they had been distributed by a small group of people or an individual.

The ACT Government has ordered an investigation into anti-Islamic pamphlets delivered to homes around Canberra and Queanbeyan during the holiday period.

The Canberra Times reported yesterday the appearance of material depicting Muslim men as wife and child beaters in letter boxes in Queanbeyan.

But it has since emerged that the literature was also delivered around Canberra and the anonymous group behind the attacks have also targeted other faiths, distributing pamphlets depicting Catholics burning in hell.

The pamphlet featured in yesterday’s report was entitled Is Allah Like You? and depicted a Muslim man physically abusing a woman and child and an Islamic elder condoning the abuse on religious grounds.

The characters in the cartoon-like publication are depicted in broad Middle Eastern racial stereotypes.

Along with Is Allah Like You?, Canberra households in Kingston, Braddon, Lyneham and Civic have received another anti-Islamic pamphlet called Allah Has No Son and anti-Catholic titles The Last Rites and The Death Cookie over the Christmas period.

The distributor of the pamphlets did not identify themselves and church groups in Canberra and Queanbeyan have denied responsibility for delivering them.

Dr Watchirs said while ACT laws did not cover religious discrimination, Is Allah Like You? was likely to have breached racial discrimination laws.

”They are not harmless and they’ve certainly crossed the line to be highly offensive,” she said.

The commissioner said ”name and shame” laws may be used for the first time if those responsible for distributing the materials could be found.

She encouraged members of the Arabic Islamic community to make an individual complaint if they had been offended by the pamphlets.