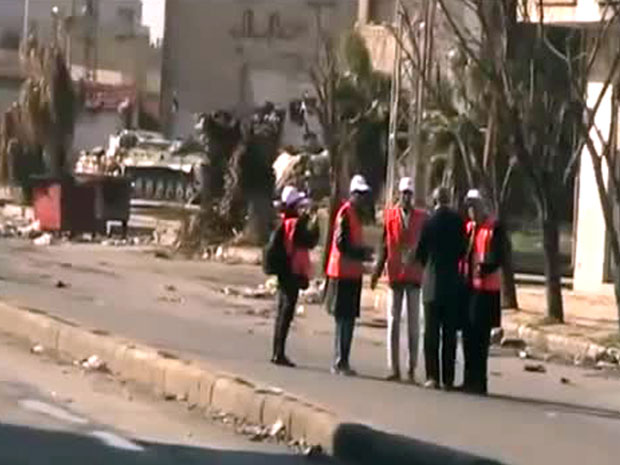 An image grab taken from a video uploaded on YouTube shows Syrian army tanks in the background as a group of Arab League observers tour the flashpoint central city of Homs on December 27, 2011 (Getty/AFP)

(Reuters) – Arab monitors head to three more Syrian cities on Thursday to check if government forces are complying with a peace plan after a delegation to Homs, center of the uprising against President Bashar al-Assad, was mobbed by a protesters demanding protection.

The Arab League mission, the first international involvement on the ground in Syria since the revolt began last March, got off to a controversial start when its Sudanese leader said he had seen “nothing frightening” on his first trip to Homs.

He later said he needed more time to make an assessment of the city, which was pounded by government firepower in the days before the visit.

The observers briefly visit Homs on Tuesday then returned to Wednesday with an army escort, to the dismay of demonstrators who mobbed their car.

They finally went back to Baba Amr district, one of the worst-hit, to see shattered houses and hear from people who have lost friends and relatives. One family showed them a dead boy.

They are likely to witness similar scenes on Thursday when they visit Deraa, Hama and Idlib, all cities where anti-Assad demonstrations have been violently repressed.

The observers’ leader, Sudanese General Mustafa al-Dabi, said the mission was still in its early days.

Opposition activists say the government will play for time and bend the mission to its own ends. But Washington urged then to give Dabi a chance.

“We need let this mission get up and running, let them do their job and then let them give their judgment,” State Department spokesman Mark Toner said in Washington.

Unless it can establish its credibility by proving it has unobstructed access to all areas and is able to hear uncensored accounts, the Arab League mission may not be able to satisfy all sides that it can make an objective assessment of the crisis.

Most of the 5,000 or more people estimated by the United Nations to have been killed in Syria since March have lost their lives in Homs, to machinegun fire, sniper bullets, mortar blasts and tank shelling, or torture.

What began with peaceful mass protests against Assad has turned into an armed insurrection as thousands of army defectors formed the Syrian Free Army and attacked military and police convoys, bases and checkpoints.

A video shot by rebels showed the ambush of a security forces convoy on Wednesday by eight gunmen who opened fire from a rooftop.

The British-based Syrian Observatory for Human Rights said four soldiers were killed in the attack by rebel troops on a road near the southern village of Dael in Deraa province, cradle of the revolt.

Assad says he is combating Islamic terrorism steered from abroad. He says more than 2,000 security personnel have been killed.

Syria resisted outside involvement for months but yielded to pressure from fellow members of the 22-state Arab League last month, agreeing to let the monitors in to witness a withdrawal of forces from the turbulent cities.

But the killing did not stop, before and during the first two days of the monitoring mission, and opposition activists predict it will not cease after the observers are gone in a month. About 200 observers will deploy to witness and interview victims of violence scattered across the country of 23 million.

The West has demanded that Assad step down but Russia and China oppose intervention. Syria also has the backing of Iran.

Assad, increasingly isolated, has lost the trust of his neighbor Turkey, which has called for him to quit and which allows the rebel army to launch attacks from its territory.