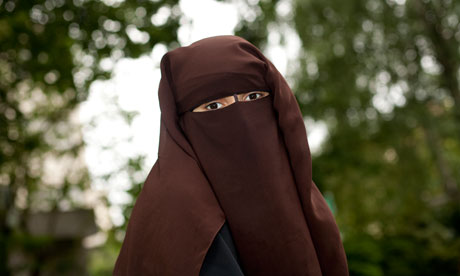 A 32-year old mother is set to become the first woman imprisoned by the French government following its introduction of the niqab ban in April.  Hind Ahmas, courageously flying the flag for women’s freedom, was first arrested on 11th April in Paris.  She refused to pay the £100 fine and abide by the court’s sentence that she spend 15 days learning citizenship.  ‘There is no possibility of me removing the veil,’ Ahmas said ‘I’m not taking it off. The judge needs citizenship lessons, not me.’

Ahmas was not even allowed into her own trial, due to the veil and now faces up to two years in prison and a £27,000 fine.

She has launched a pressure group ‘Do Not Touch my Constitution’ along with Kenza Drider a fellow niqabi who is running for president in Spring.

Since France announced its ban in April, Belgium has swiftly followed suit.  Women wearing niqab there, do not face fines, rather automatic seven day prison sentences.  In Italy, the right wing Northern League have resurrected a 1975 law against face coverings resulting in the issuing of fines in the North. The Italian government is currently drafting…