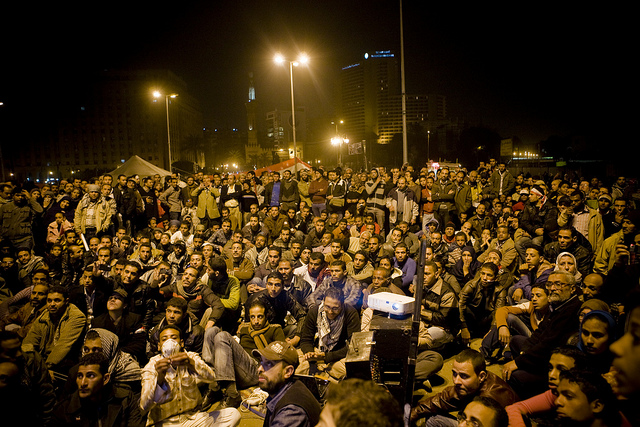 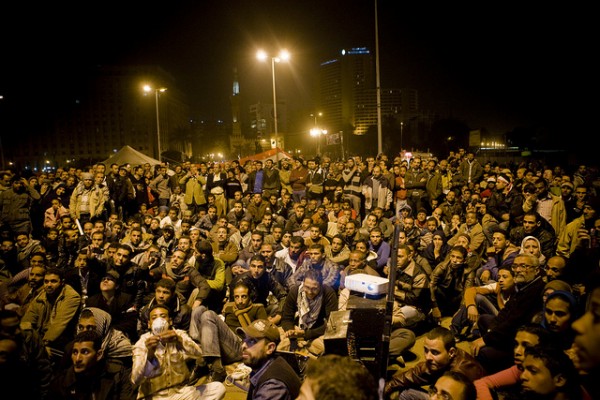 A week ago last Saturday, as scores of protesters fled across the Nile away from a charging squadron of khaki-clad military policemen, the Arab Spring seemed to have come full circle in faintly Orwellian fashion.

“Where are the stones?” cried one young man, desperately searching for something to hurl at the oncoming police as he addressed dozens of protesters retreating from Tahrir Square. “There are no stones here.”

Almost 11 months previously, I had walked in the opposite direction over the very same bridge as the first waves of Egypt’s popular uprising came crashing into downtown Cairo.

Tens of protesters had turned into hundreds, then thousands, as the Egyptian street began to boil with a kind of intensity unknown during the time of Hosni Mubarak, the ailing pharaoh of a once-great but now stagnating Arab power.

Back then it was the hated central security forces which had been the target of the protesters’ stones.

On the night of January 28, after breaking police lines near the enormous bronze lions guarding the eastern end of Qasr el-Nil Bridge, the revolution’s shock troops – brave, young die-hards crucial to Egypt’s uprising – were battling for control of Tahrir Square. I squatted down behind a plastic road barrier which had been hauled to the front line by a group of activists.

Beside me, perhaps only 50 yards from the central security forces, a middle-aged woman, clad in a traditional black, full-length abaya, stood ramrod-straight, fearlessly shaking her fist and screaming at the baton-waving police.

It was a profound image: an average woman, possibly a mother, who like hundreds of thousands of others had lost her fear and was now wrenching Egypt’s future away from the control of a corrupt and crumbling autocracy. Two weeks later, when Hosni Mubarak fell, it seemed like she had won.

Fast forward nearly a year and the picture appears much murkier. This time, the activists streaming across Qasr el-Nil Bridge were fighting the military, not the central security forces. For many, the ruling generals who took power in February have betrayed the revolution like the power-hungry Napoleon in Orwell’s Animal Farm.

In the early days of the uprising, when protesters shouted “The army and people on one hand”, they really meant it.

But then so too did the sloganeers earlier this month, when they responded to yet more deaths at the hands of the government with a cry of “The people want the execution of the Field Marshal”. Such is the difference 11 months can make to the sound of the Arab street.

In the weeks after the military announced in a televised statement that it would be overseeing a transition to civilian rule, numerous opposition figures and political groups talked about their hopes and fears for the future.

Most, from the influential Muslim Brotherhood to the newly sprouting liberal forces, appeared hopeful that the military could be trusted.

When it was clear that the original six-month timetable was optimistic, the impression of an army as irreproachable arbiter barely lost its sheen. By the time Hosni Mubarak appeared in his courtroom cage in August, it seemed that the generals and the people were still on the same hand.

Yet many were pricking their ears to some uncomfortable background mood music. The use of the military court system to process thousands of civilians pointed to an army unwilling to jettison its authoritarian ways. The transitional timetable was repeatedly shredded and then revised, until Egyptians were told that they might not get to vote for a new president until 2013.

An announcement in September that the generals would retain the much-hated Mubarak-era Emergency Law was followed the next month by a deadly attack on mostly Christian demonstrators in central Cairo. Activists had clapped the armoured personnel carriers when they restored order in January; now they saw TV pictures of them ploughing into crowds of civilians.

All of this formed a prelude to the November riots, when dozens of people were killed in outbreaks of violence across the country just days before Egypt’s historic elections.

Though the military has now promised a presidential poll before the end of June, it is impossible to tell which way the wind is blowing. The Muslim Brotherhood is not the bogeyman so often depicted in the West. Far more startling for Egypt’s Christians and secularists has been the success of the ultra-conservative Al-Nour Party.

From its opening chapter, the Arab Spring has defied the analysis of political soothsayers. Only a fool would place a bet on what will happen next.

25 January 2011 – Thousands of people march through central Cairo calling for the resignation of President Hosni Mubarak.

28 January – After the death of more than 20 protesters, President Mubarak sacks his government.

11 February – Mubarak resigns and hands power over to the military. He flees to the coastal resort of Sharm el-Sheikh.

20 March – More than 75 per cent of voters back a move to amend Egypt’s constitution, paving the way for elections later in the year.

13 April – Mubarak and his sons are detained over corruption and their role in the crackdown.

3 August – Mubarak appears in the dock, wheeled into an iron cage in the Cairo courtroom on a hospital bed.

28 November – Following months of delays and continued clashes between protesters and security forces, Egyptians head to the polls.

14 December – After the Muslim Brotherhood took 47 per cent of the seats in November’s election, the second of three rounds of voting begins.