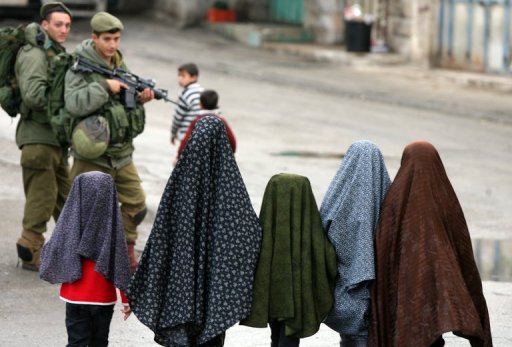 HEBRON, Palestinian Territories — After his release from an Israeli jail, Barakeh Taha could finally marry and held the wedding at a disputed West Bank site holy to Muslims and Jews where tension once led to a massacre of unarmed Palestinians.

No random choice, Taha aimed to back a Palestinian campaign to claim heritage rights over an ancient burial cave in the heart of Hebron’s Old City.

Known to Muslims as the Ibrahami Mosque and to Jews as the Cave of the Patriarchs, the landmark is venerated in both religions as the gravesite of the Biblical patriarch Abraham and his family. It is long claimed by both Israel and the Palestinians.

But the row has extended to cultural rights, and looks set to end up before the UN cultural agency, UNESCO, which — in a diplomatic victory for Palestinians — just admitted them as a member despite stiff resistance from Israel and the United States.

“I encourage all couples to get married here to support the holy site and the resistance,” said the 32-year-old, who was released in October under a prisoner swap deal which also freed Israeli soldier Gilad Shalit who spend more than five years in Hamas captivity.

Palestinians must “thwart attempts to occupy it so it can be Judaised or controlled,” Taha said.

Last year, Israel added the Cave to its list of national historic monuments in a move that sparked days of clashes between Palestinian youths and Israeli forces, thousands of whom are stationed here to protect an enclave of hardline Jewish settlers holed up in Hebron’s Old City.

Jewish groups are now working hard to increase the number of visitors to the Jewish section of this site on the occupied West Bank.

In response, the Palestinians launched a counter-campaign to encourage their ranks to hold celebratory events like circumcision ceremonies and weddings at the site’s mosque.

“The Ibrahimi Mosque is for the Muslims and the Palestinians, not for the Jews nor for the settlers and I’m proud to be getting married in this magnificent place,” said Lubna al-Natsheh, Taha’s 19-year-old bride.

“We will not abandon it,” she vowed. “We will continue to come here and return one day with our children.”

The Palestinians say they will ask UNESCO to formally recognise their cultural attachment to the Ibrahimi Mosque in February — a move only made possible by their admission to the UN body two months ago.

“Before we gained membership, we didn’t have the right to add a Palestinian archaeological site to the World Heritage List because we are under occupation and the only way to do it was through friendly countries,” said Palestinian culture minister Siham al-Barghuti.

“Now we can ask UNESCO to add our archaeological and religious sites to the World Heritage List,” she said. “It’s the main benefit we’ve won.” And if granted, would be a second symbolic victory after UNESCO membership.

Before the diplomatic wrangling starts, the Palestinians want to send clear signs that their people cherish the Ibrahami Mosque — as on November 26 when huge crowds gathered there to mark the Muslim New Year, many with their hair newly cut in line with tradition.

“I haven’t seen such crowds for long time, it’s five times more people than were here last year,” said Palestinian Hijazi Abu Sneineh, who called it a “reaffirmation of the Arab and Islamic character of the mosque”.

While both Muslims and Jews pray at the compound, the site has been divided into separate sections since 1994 when an Israeli settler opened fire on Palestinian worshippers, killing 29 of them.

Despite the mosque’s bloody past, Salah Abu Turki, 44, proudly carried his baby son for his circumcision ceremony — a rare event in recent years because of Israeli restrictions on Palestinian access to the site.

“It’s a great honour for me that my son is being circumcised here,” he said.

“The settlers also circumcise their children here, but we have more rights to do so than them because this place is a mosque and this is an ancient tradition for the people of Hebron,” he said.

Heritage efforts are focussed on more than the mosque. The city’s Mayor Khaled Essili recently returned from Paris where he took part in a conference at the Institut du Monde Arabe in support of adding Hebron’s entire Old City, including its holy sites, to the World Heritage List.

“We started a campaign three years ago to add Hebron’s Old City to the UNESCO list,” he said.

“Now the request is ready and we will present it to UNESCO in February 2012.”