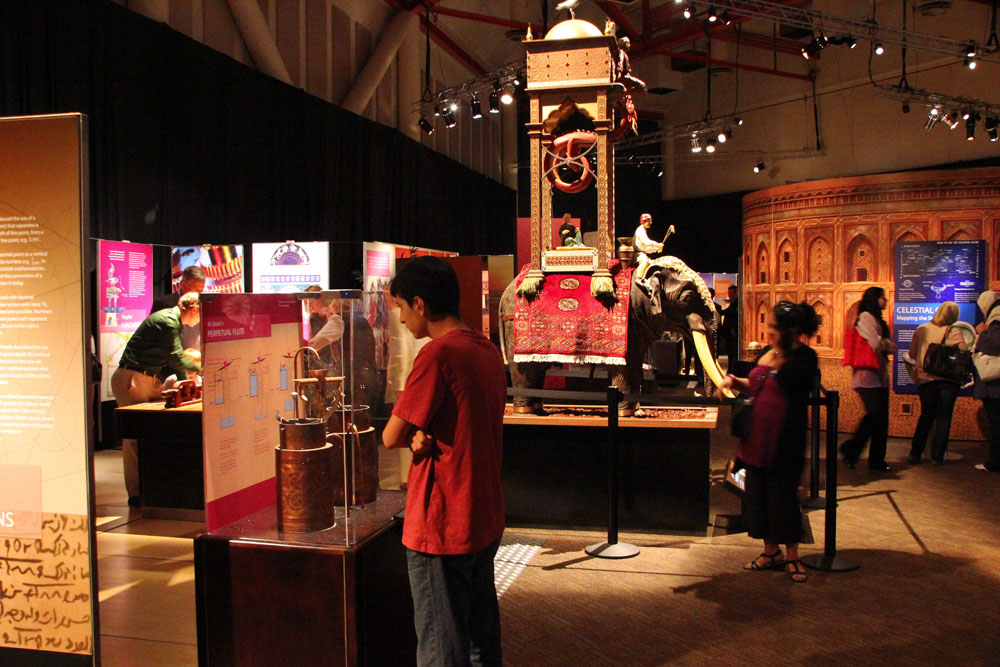 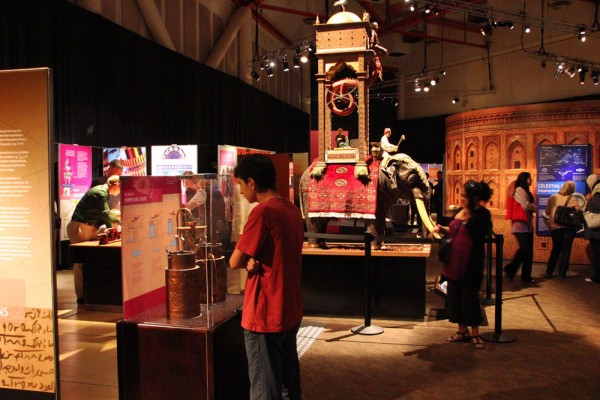 A remarkable interactive exhibition called “Islamic Science Rediscovered” at the Tech Museum in San Jose, California, (http://www.thetech.org/islamic_science_rediscovered/) in the heart of Silicon Valley is drawing large number of visitors. The exhibition celebrates “a Golden Age of Science and Technology” when, from the 8th to the 13th century, Muslims led the world in such fields as architecture, arts , astronomy, engineering, exploration, flight, mathematics, medicine, optics and water management.

A timeline highlighting the significant events in Islamic culture and science during the golden age greets the visitor at the entrance to the exhibit.  Once you grasp the outline, you can begin to focus on the specifics.

In “Technology and Inventions,” we are acquainted with the remarkable Banu Musa Brothers – Muhammad, Ahmad and Hasan (800/805/810-873) – who excelled in engineering, mathematics and astronomy. Al-Jazari (1136-1206) was a polymath who invented over fifty mechanical devices and automated machines, described in meticulous detail in his “Book of Knowledge of Ingenious Mechanical Devices.” What distinguished Muslim technologists were that their inventions made people prosperous without causing any social disruption.

A segment captures the monumental contributions that mathematicians like al-Khwarizmi (780-850), al-Uqlidisi (920-980) and others made to arithmetic, geometry, algebra and trigonometry. Al-Uqlidisi discovered decimal fractions. Khwarizmi’s name is associated with algorithm and algebra. The term “algebra,” which literally means “to restore the unknown,” is taken from his book al-Kitab al-mukhtasar fi hisab al-jabr wa’l-muqabala, (The Compendious Book on Calculation by Completion and Balancing). He classified all equations into three main types and discovered solutions for each. Mathematical discoveries of Muslims have been used as compositions in pure harmony in architecture, ranging from the al-Hambra in Granada, Spain, to Stanford University in California.

Abbas Ibn Firnas (810-887), the Andalusian polymath, drew inspiration from birds and became a pioneer of flight. Using the flying machine that he built, he was able to fly a millennium before the Wright brothers were even born!

An European physician, De Poure, put Muslim contributions to medicine in perspective when he wrote, “Medicine was absent until Hippocrates created it, dead until Gazen revived it, dispersed until Rhazes (al-Razi) collected it, and deficient until Avicenna (Ibn Sina) completed it.” In his Qanun fi al-Tib (The Canon of Medicine), for instance, Ibn Sina (980-1037) offered treatments for every disease known until the 11th century and described over 760 drugs. It was translated in Latin in the 12th century and remained the standard medical text for almost 5 centuries. Al-Zahrawi (940-1013) revolutionized surgery and is considered the father of modern surgery. Many of the surgical tools he invented are still in use today. Ibn al-Nafis (1213-1288) described the circulatory system 300 years before William Harvey did. The first modern hospital was built in Baghdad over a thousand years ago. The first pharmacies were established in the Muslim world 400 years before they were in Europe.

Ibn al-Haytham (965-1039) was the greatest physicist of his time. He laid the foundation of modern optics by discovering that light travels in a straight line and that image is composed of light reflected from the object into the eye. He created the first pinhole camera to experimentally verify his observations. The word camera, in fact, comes from the Arabic word “qamara.”

The exhibition lists many more Muslims than are mentioned here – polymaths, scientists, physicians and explorers – whose extraordinary creativity and ability to synthesize ideas from various cultures, from Greece to Egypt to India, led to so many original and groundbreaking discoveries. That the exhibition is taking place in California’s Silicon Valley is only appropriate. After all, the roots of the Valley’ innovation – algorithms, Arabic numerals, astronomy, aviation, engineering, medicine, biology, physics – are watered in large part by the discoveries made during the Islamic Golden Age.

For a Muslim visitor, though, a subversive thought rears its head. Repeatedly I found myself asking, “So what happened? Why the staggering decline?”

Consider just one example. The Bait al-Hikma (The House of Wisdom) in Baghdad was the most enlightened intellectual center during the Golden Age. As part of its library and translation services, Muslim scholars translated into Arabic nearly the entire Greek corpus in medicine, mathematics and natural philosophy. A Western historian has written that this translation movement was equal in significance to the Italian Renaissance and the scientific revolution of the sixteenth and seventeenth centuries.

But now? Spain, hardly an intellectual power, currently translates more books per year than the entire Arab world has in the past several hundred years!

As Pervez Hoodbhoy, an MIT-trained Pakistani physicist has noted, 46 Muslim countries combined contribute 1.17% of the world’s scientific literature; India (1.66%) and Spain (1.48%) each contribute more to the world’s scientific literature than these countries combined. A telling remark comes from Nobel-physicist Steven Weinberg: “Though there are talented scientists of Muslim origin working productively in the West, for forty years I have not seen a single paper by a physicist or astronomer working in a Muslim country that was worth reading.”

Thousands of papers and books have been published about the decline of science in Muslim countries. These include the ascendance of religious orthodoxy, the defeat of the rational Mutazilites by the dogmatic, anti-rationalist Asharites, colonialism, dynastic rule, authoritarianism, backward educational system, removal of science and mathematics from the madrassa curriculum, disappearance of the spirit of inquiry, manufactured conflict between faith and reason, underfunding for science, triumph of politics over research, and so on.

The contrast between where Muslims stand now and where they stood in the Golden Age is stark and painful. But I also think we need to start looking toward the future rather than lamenting the status quo. While we must learn from history, it is self-defeating to wallow in it. Mere longing and walking down Nostalgia Avenue will not bring back past glory.

Ahmed H. Zewail, an Egyptian-American and a professor at Caltech, won the Nobel Prize for chemistry in 1999 “for his studies of the transition states of chemical reactions using femtosecond spectroscopy”. He is one of only two Muslim scientists and Nobel-Laureates featured in the exhibit, the other being Abdus Salam (1926-1996) who shared the 1979 Nobel Prize in physics with Steven Weinberg and Sheldon Glashow “for their contributions to the theory of the unified weak and electromagnetic interaction between elementary particles, including, inter alia, the prediction of the weak neutral current”.

Dr. Zewail is, of course, concerned mostly with Egypt, particularly in the light of the Arab Spring, but the four pillars of change he advocates for a renaissance in the country of his birth are true for other Muslim countries as well. These are a) reform of the constitution, b) respect for the rule of law, including a strong and independent judiciary, c) a renaissance in education, and d) reform of the media.

Let’s just focus on the third pillar, keeping in mind that the four together form a holistic whole. By dint of his stature, Zewail was able to pass a decree in Egypt to establish a City of Science and Technology “for the purpose of modernizing science and technology education and advancing the level of productivity. We have already raised nearly $200 million as the seed for an endowment to establish a campus in Zewail City that will be governed by a board of trustees made up of distinguished scholars, including the president of Caltech and six Nobel Prize winners. These steps are the beginning of a nationwide transformation.”

The vision is clear. Institutions of higher learning must not be prisoners of politics and nepotism. Instead, their only goal must be the pursuit of knowledge and the training of the mind, and their only currency the quality of scholarship and the seeds of discovery. While democratic governments come and go by the will of its citizenry (and for true democracy to flourish, the citizenry must be knowledgeable, responsible and forward-looking), a nation’s universities and research centers cannot thrive if they become beholden to the power and the politics of the day. Can institutions like Caltech, Harvard, Stanford, MIT, Berkeley, Oxford and Cambridge maintain their world-class standards if they are to staff their departments with political appointees and hacks? Of course not! This, however, is a serious issue in all Muslim countries today and it must be addressed if we are not to remain peripheral in a world increasingly dominated by science and technology.

The Arab Spring has stirred hopes of good governance and great education in Arab countries and, by extension, in all Muslim countries, although the current clashes in Egypt show that Dr. Zewail’s vision so far remains just that, a vision. But let’s at least agree to banish silly and false ideas like the conflict of faith and reason from our discourse. If there was a conflict between faith and reason, there would not have been any Golden Age of Islamic Science.

An exhibition like “Islamic Science Rediscovered” reminds a visitor that a modern House of Wisdom can arise in a new Baghdad, Cairo or Damascus in the next fifty or hundred years if Muslims set their priorities right, pursue self-dependence and direct their efforts and resources toward innovation and discovery.