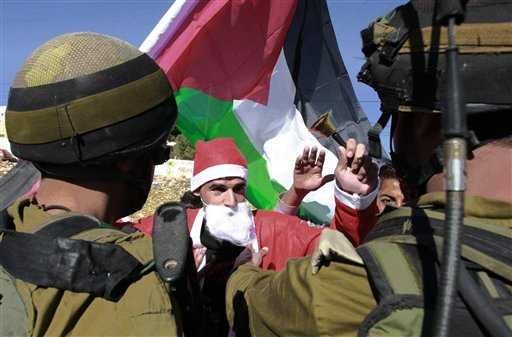 As thousands of Christian pilgrims from all over the world headed to Bethlehem this weekend for Christmas celebrations, Palestinian Christians in the tiny city were struggling to keep the Christmas spirits life under Israeli occupation that cuts their city from its historic twin Al-Quds (Occupied Jerusalem).

“If Jesus were to come this year, Bethlehem would be closed,” Father Ibrahim Shomali, the priest of Bethlehem’s Beit Jala parish, told The Sydney Morning Herald on Saturday, December 24.

“He would either have to be born at a checkpoint or at the separation wall. Mary and Joseph would have needed Israeli permission – or to have been tourists.”

Christian pilgrims flock to Bethlehem every year in this period to celebrate Christmas at the historical Nativity Church, built on the site where Jesus is said to have been born in a stable.

But the Israeli restrictions are turning the journey of many tourists into the city into a nightmare.

Though it lies only three miles from Al-Quds (Occupied East Jerusalem), it takes hours from tourists to reach Bethlehem, thanks to the barrier Israel is building in the occupied West Bank.

Moreover, new settlements built on 18 square kilometres in the northern part of the city were cutting off Bethlehem from its historic twin, Occupied Jerusalem.

One of the settlements, Har Homa, is built on land where angels are said to have announced the birth of Christ to local shepherds. Another settlement, Gilo, currently occupies the northern ridge of Bethlehem.

Currently, a narrow corridor of land between Har Homa and another settlement, Gilo, still connects Bethlehem to Jerusalem.

Yet, the construction of Givat Hamatos, a settlement announced in October, will fill this in a matter of years.

EU foreign affairs chief Catherine Ashton warned the construction of Givat Hamatos was “of particular concern as [it] would cut the geographic contiguity between Jerusalem and Bethlehem”.

The International Court of Justice (ICJ) has issued a landmark ruling in 2004 branding the wall as illegal and asking Israel to compensate affected Palestinians.

Permanently changing the geography of occupied Palestinian territories, Israeli illegal settlement were seen as killing the promise of any future state for Palestinians.

“This really is the big problem for Palestinians in Bethlehem: what will happen when they close us off completely?” Father Shomali asked angrily.

Activists warned that even if a peace agreement razes the separation wall, the two cities will remain divided.

“These efforts are being made to prevent a possible two-state solution because in order for that to work, you would need a viable Palestinian state with its capital in East Jerusalem,” Israeli activist Hagit Ofran, director of Peace Now’s Settlements Watch project, said.

“The more Israel is building, the higher the price of a Palestinian state is becoming.”

Palestinians want to create a state in the occupied West Bank and the Gaza Strip, with Al-Quds as its capital, and say settlements deny them a viable country.

After the collapse of the US-sponsored peace talks over Israel’s refusal to halt settlement building in the occupied West Bank, Palestinian President Mahmoud Abbas presented a request to the United Nations for full membership of a Palestinian state.

There are more than 164 Jewish settlements in the West Bank, eating up more than 40 percent of the occupied West Bank.

The international community considers all settlements on the occupied land illegal.

Entrapped behind Israeli separation barrier and settlements, the future of the holy city of Bethlehem was gloomy for many analysts.

“The little town of Bethlehem? It will soon be the little ghetto surrounded in all directions by Israeli settlements,” Jad Isaac, an expert in Bethlehem’s demographics and a consultant to the Palestinian president, predicts.

“We’ve already passed the stage where Bethlehem can be saved. Frankly, that’s why I don’t celebrate Christmas anymore.”