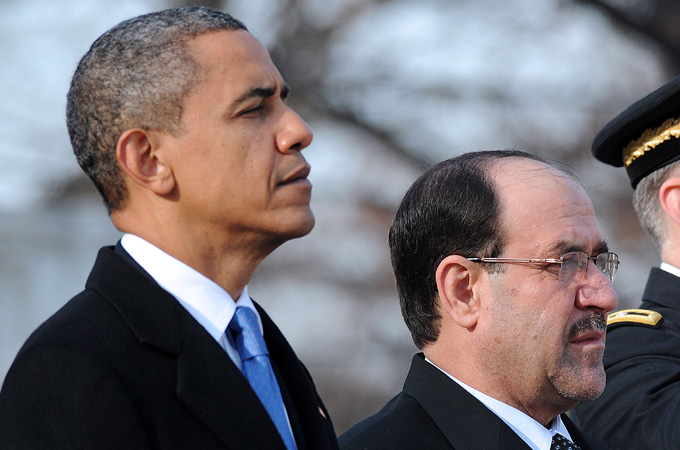 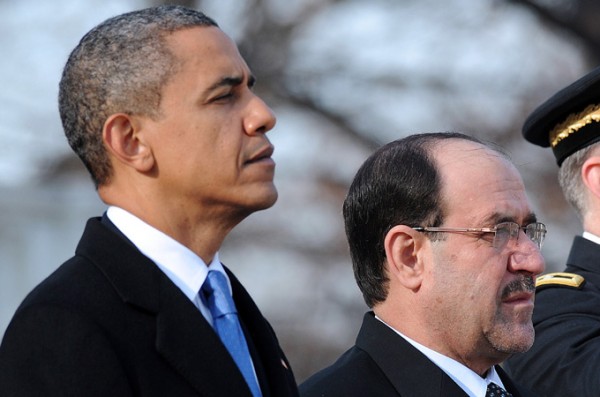 New York, New York – Launched with so much bluster and zeal as a campaign – no, make that a crusade to save the world from invented WMDs – the Iraq War, we are told, is winding down. US soldiers are being shown the door amid claims that the only winner is Iraq itself.

In a formal photo printed in the New York Times, President Obama, with hand over heart, poses with Iraq’s Prime Minister Nouri al-Maliki at the Arlington National Ceremony and boasts of a “successful outcome”.

“What we have now,” he says, “is an Iraq that is self-governing, that is inclusive, and that has enormous potential”.

Wreaths were laid at a cemetery as the remaining US troops that rolled across the desert with so much ardour back in 2003 are now ready themselves to roll out.

Unmentioned in the article were the futile negotiations and pressure by a US government desperate to stay in the country by any means possible. When domestic sentiment in Iraq made that impossible, the US began the process of turning its junior partner into a new customer with more sales of military hardware that include at least 18 more F-16 fighters. With oil pumping again in Iraq, it will now have to pay back these pricey procurements, and Washington will become a beneficiary with an outgoing revenue stream now “incoming”.

Maliki has also been playing his own game, trying to show he is not an American client by refusing to join calls to topple Syria’s Bashar al-Assad and rejecting a trade embargo favoured by the West. This assertion of independence is not appreciated by those who feel he “owes us” and should ask “how high” when we say “jump”, although President Obama says he “respects” Maliki’s decision.

At the same time, Maliki has dipped into Saddam’s playbook by deploying his own secret police and military to round up hundreds of former Baathist supporters (bear in mind that Iraqis in that era had no other choices). A US think-tank documenting his crackdown is saying that Maliki is primarily concerned with his own survival. “Maliki is a Maliki-ist”, says one expert. You could find similar quotes just a few years ago about Saddam being a “Saddam-ist”.

Power does that. Hussein, who began his dictatorial rule with US support, was known for dispensing with his opponents too. Maliki, however, does so in the name of a “fragile democracy”. Like Saddam, he too uses his son, Ahmad, to evict US firms from the Green Zone in Baghdad and do his father’s forceful bidding. And human rights groups are criticising him for running secret jails, imprisoning journalists and critics, and firing 100 professors from a university in Saddam’s old hometown of Tikrit.

Apparently, the US has expressed “concerns” about this behaviour. But those concerns don’t seem to get in the way of commercial deals and political support. Rule by fiat seems fine when carried out by our friends.

Here in the US, it is as if Iraq “fatigue” has set in. There’s little reporting now about a war that most Americans seem to agree was a mistake and that was once featured on every channel around the clock.

This savage war has long been deemed an embarrassment, except by the contractors who have made fortunes and the soldiers who are still being thanked for their “service” as they head home facing certain unemployment. Because of their frequent tours, many are nursing serious wounds, coping with mental problems and dealing with broken families. They are also victims of the conflict, but not to the same extent as more than a million Iraqis who seem to have been forgotten and ignored.

It may take a while for officials to admit that the US lost the war it never should have started, but that will come too.

We have effectively “liberated” oil fields for other countries to claim while politicians trained in Iran have taken many positions of power. Tehran must be happy that the US deposed Saddam Hussein, whose US-backed war against Iran cost them at least half a million lives.

And the gigantic protest movement spawned by the war, while focussed now on Afghanistan, is still active. The Stop the War coalition in London is backing a protest at the US embassy supporting “Iraqi Democrats Against the Occupation”. They have called for “a picket outside the American embassy in Grosvenor Square to mark the occupation forces’ scheduled withdrawal from Iraq at the end of this month. Demonstrators will be demanding the expulsion of all American mercenaries, military advisers and trainers and reduction of the size of the American embassy in Baghdad”.

The opposition in Iraq sees the US role and the politicians they put in power through elections as occupiers of questionable integrity. That suggests we have not heard the last of a resistance movement in Iraq, which means that violence and instability is still a threat. It may, however, be hard for the US and American media outlets to predictably blame all criticism on al-Qaeda terrorists in the future.

With Maliki now terrorising his own enemies, often in the name of questionable “plots” to overthrow him, Iraq will remain volatile. Bear in mind that after all these years, the Iraqis are still suffering from a broken electricity system as well as serious food and medical shortages.

The county has a long way to go to recover from a war that is not over. The US, meanwhile is going, at least publicly. The neo-cons who backed the war now see Iraq as a “surrogate” that will remain dependent – or at least, so they hope. To paraphrase a cliché: The war that began with the bang of shock and awe ended with the whimper of withdrawal with few of the issues solved. Many Americans are saying “good”, while most Iraqis are saying good riddance.