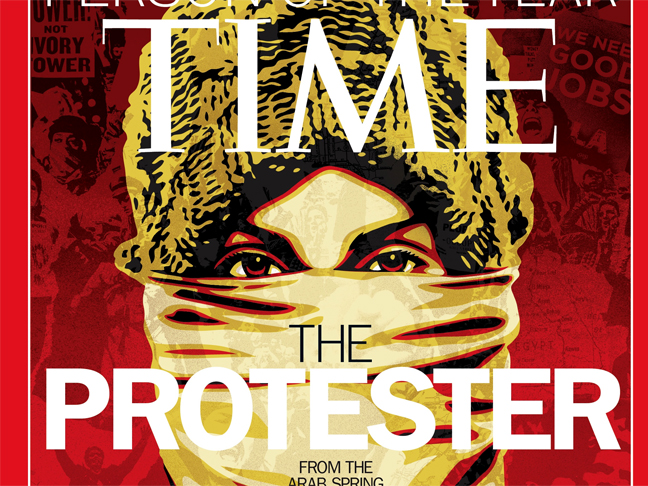 Anonymous and defiant, a masked woman has been chosen as the figurehead of a turbulent 12 months. The US current affairs publication Time has announced ‘The Protester’ is its ‘Person of the Year’.

Time gives the accolade to those who influence the events of the year, for better or for worse. 2011 has been marked by demonstrations across the world. In the Arab world they have reflected anger against long-standing regimes and a desire for change. In the West, protest has been fuelled by economic hardship.

Explaining the decision, Time’s international editor Jim Frederick said: “For the past 20 to 25 years, almost a full generation, protest had stopped being a really viable way to change the political order. And then suddenly, almost out of nowhere, all across the globe, you have global, mass market protests that… we’re two regimes down and counting, whether it’s in Russia and London, Wall Street and all across the Middle East, suddenly the protest has become one of the ways people are actually taking back political power.”

What started out as a regional phenomenon in North Africa soon spread to Western cities. Though inspired by different causes, the protests represent a spirit of dissent and dissatisfaction with the established order. As 2011 draws to a close, that spirit seems likely to continue in 2012.

Tags: person of the year the protestor Time magazine