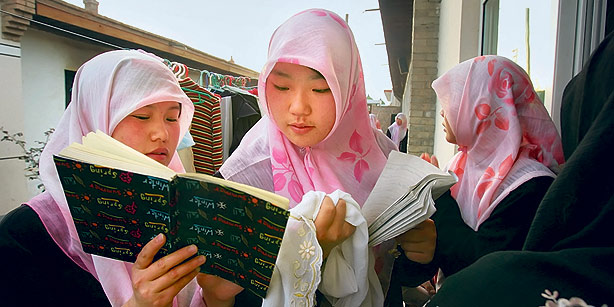 A city in heavily Muslim far western China has begun a campaign to discourage headscarves and growing long beards in a bid to “dilute religious consciousness,” media reports said on Thursday.

The notice by the government in the Xinjiang city of Yining was uploaded in full by several Chinese news websites, and by Hong Kong-based Phoenix Television, though it then vanished from the Yining government’s website (www.yining.gov.cn).

Many Uighurs, a Turkic language-speaking Muslim people native to Xinjiang, resent Chinese rule and controls on their religion, culture and language, and the region has seen sporadic cases of violent unrest.

The notice said the government in the Dunmaili district of Yining had decided to “further implement the Party’s activities to dilute religious consciousness and advocate a civilized and healthy lifestyle.”

One of the campaign’s aims, it said, was to end the “the abnormal phenomenon” of ethnic minority women and youth wearing Arab dress, growing long beards or covering their faces.

Women who had already “been transformed” would be invited to hold talks to discuss their experience, as would women who had launched successful careers. Yining government officials declined to comment when contacted by telephone.

Hou Hanmin, a Xinjiang government spokeswoman, told Reuters she was not aware of the notice, but that generally people in the region were free to wear what they wanted, including ethnic minorities.

“However, for certain jobs and in education there are rules about what you cannot wear simply as a matter of convenience,” she said by telephone.

Yining, also known as Ghulja or Yili, has a population of some 515,000 people, about 46 percent of whom are Uighur, according to the 2010 census figures. It was the site of deadly riots in 1997.