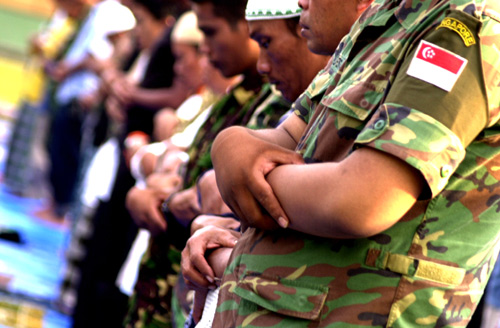 Singapore prides itself as being a harmonious multiracial metropolis, but a spate of controversial Internet postings hints at simmering tensions beneath its rosy façade.

Police are currently investigating three offensive Facebook posts, all of which are directed against the island nation’s minority Malay Muslim community. The complaints, which surfaced earlier this month, have stirred public hand-wringing on the character of racial and religious relations in the city-state.

The former U.K. colony, home to a broad historical migrant mix mainly from China, the Malay archipelago and India, retains bitter memories of racial turmoil in 1950s and ’60s, when deadly riots contributed to Singapore’s exit from Muslim-majority Malaysia in 1965 to become an independent state. Its current resident population of 3.79 million citizens and permanent residents is about 74% ethnic Chinese, 13% Malay and 9% Indian.

While no major ethnic violence has occurred here since 1969, discord has surfaced intermittently. Some incidents have even drawn the use of colonial-era anti-sedition laws, most recently in 2009, when a couple was jailed for eight weeks for distributing Christian tracts that portrayed the Prophet Mohammed negatively to a number of Muslim Singaporeans.

Singapore law broadly defines sedition as acts agitating against the government and the administration of justice, fostering discontent among citizens, and promoting hostility between ethnic groups.

Formal charges have yet to be brought in the latest complaints, which aren’t the first allegations leveled against offensive online postings. Nonetheless they have drawn attention to official policy on race and religious relations, and the travails of policing a fast-evolving social media landscape.

The second involved a conscript in Singapore’s military, Christian Eliab Ratnam, who posted on Facebook an image criticizing Islam, including claims that it is an “authoritarian, political doctrine.”

Blogger Donaldson Tan, 28, became subject to police inquiries last week after re-posting an image of a pig — pork is taboo in Islam — superimposed on the Kaaba, a sacred Islamic building in Mecca, prompting even the Ministry of Home Affairs to release a rare statement on the issue.

“The right to free speech does not extend to making remarks that incite racial and religious friction and conflict. The authorities take a very serious view of all instances of racial and religious incitement,” the statement said. “The public should let the investigations take their course and refrain from adding comments that may further inflame the situation.”

A police spokeswoman declined to say when investigations might be completed, or what charges may be brought — if any. In a similar case early last year, two teenagers were detained and issued warnings for malicious remarks made against Indians on a Facebook group.

Mr. Neo, who posted the photograph in February before he joined the Young PAP, has since apologized and quit the party, while Mr. Ratnam offered a mea culpa and has deactivated his Facebook account.  Mr. Tan, however, denied wrongdoing, saying he re-posted the image to warn against such deliberately provocative acts.

Last week, Information Minister Yaacob Ibrahim reiterated his suggestion of creating guidelines for Web behavior to shape opinions and discussions in a “rational and sensible manner that will not offend other groups, other communities,” according to the Straits Times newspaper.

But some observers argue social media had less to do with the latest incidents than the government’s own paternalistic and restrictive approach to race and religious relations.

“The real reason true harmony in Singapore has remained superficial is because the state does not permit mature discourse to address the reality of racism, choosing instead avoidance of any remarks on race- and religion-related issues,” sociopolitical blog the Online Citizen said last week in an editorial.

Michael Barr, an academic and Singapore expert at Australia’s Flinders University, said official policies like the establishment of Chinese schools and the focus on ethnicity in public administration have undermined the government’s genuine efforts to promote harmony.

“Through ignorance and lack of interaction, many young people in the Chinese majority actually don’t know any non-Chinese…the only way that many of them know anything about Malays and Muslims is through what they read and hear – and it isn’t a pretty picture,” Mr. Barr said.