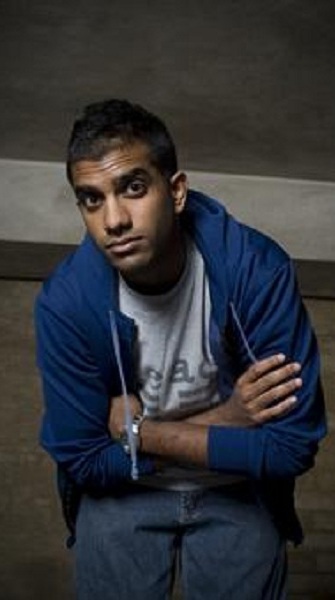 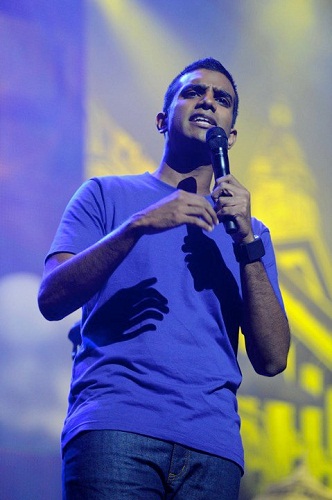 Over the years I’ve seen many a stand-up show staged by some of the world’s most renowned comedians. I’ve squirmed in my seat as they predictably began the smutty portion of their act with jokes about women in uncompromising situations and carnal appetites big enough to make me lose my appetite.

But then the ‘Muslim jokes’ inevitably surface and I end up contorting in horror. So much so that I consider auditioning for Cirque du Soleil. Jokes about 70 virgins, terrorists and suicide bombings (boom tish!) are aplenty. So are my personal favourites: camel-spitting sounds. (They’re meant to be the comedians’ impersonations of the Arabic language apparently [cue laughter]).

It’s fair to say that post September 11, Muslims became fair game to many comedians. So it’s refreshing to see a Muslim comedian like Melbourne’s Aamer Rahman not only perform skits that are squirm-free for many Muslims, but also wittily turn anti-Muslim jokes on their head and leave the audience with something more than just airport security jokes to think about.

The 29-year-old gave up a career in law to join comic act Fear of a Brown Planet with fellow funnyman Nazeem Hussain. Together the duo deliver a firebrand comedy act that is both unapologetically honest and uproariously funny.

In this week’s instalment of Conversations, Asme Fahmi speaks to Aamer about racial politics, social activism, ninja turtles and just how he became the new-age South Asian renaissance man…

Let’s start with the name of your show: Fear of a Brown Planet. That’s a Public Enemy reference right?

Yeah it is. Public Enemy had a major album called Fear of a Black Planet, so it was a play on that.

Have you met the band?

So did they find out your act was inspired by their album title?

No, that was about three or four years before I actually got into comedy. It was me just being a massive fan-boy of theirs [laughs].

They never found out?

No. Then Nazeem [Hussein] met Chuck D from Public Enemy years later and said, “I’m in a group called Fear of a Brown Planet”, but he didn’t mention we were a comedy group so I think Chuck D thought we were some weird cover band or something.

He didn’t mention comedy at all! So out there, Public Enemy think there’s some weird, lame South Asian cover band version of them performing at RSL clubs and tacky suburban locals [laughs].

So what made you decide to get into comedy?

It was really a massive accident. Nazeem and I entered an amateur competition [RAW comedy competition] in Melbourne performing to, basically, our friends who turned up to support us and it kind of snowballed from there.

Was becoming the runner-up in a televised competition like RAW somewhat an epiphany for you? That it was possible to do this for a living?

Well, it was just me performing to my friends, and of course my friends were going to find it funny because these are issues we all joke about together. I think that moment came when Nazeem and I teamed up and formed Fear of a Brown Planet… the response to that is something we didn’t expect. We didn’t anticipate that an entire week of shows would sell out in one night.

Why did you give up on the law degree?

Because it made me miserable and made me want to kill people, which I thought was a good reason to give it up [laughs].

How did you your parents react when you told them you were leaving law and looking into comedy as a career?

Um yeah… [laughs] They thought it was nice that I was doing this stuff but they never fully encouraged it as an alternative type of career.

Was it a struggle to convince them otherwise?

I wouldn’t say it was was, I’d say it still is! [Laughs] They’re not convinced that it’s something you can live off.

Would you describe your brand of comedy ‘political humour’?

Yes, it’s definitely political. Even if you didn’t want it to be called political comedy, it would still be political. Just being a Muslim comedian who’s unapologetic is going to make it political.

And who would you say are your comedic inspirations?

That’s an interesting mix… Do you really believe there is a fear of brown-skinned people?

‘Fear of a Brown Planet’ means racism. It encompasses this modern age of the ‘war on terror’, what it means to have Australian value – you know, this complete fear of the other. Whether it is overseas – fearing the people we are at war with – or fearing immigrants or refugees or people who have been here for generations and they’re still considered a threat because they wear a headscarf or they have a beard; it’s all these things that we’re in contact with everyday. Whether people want to admit it or not, it’s real.

You’re fearless up onstage and you’re not afraid to tackle the controversial issues. Has there ever been a moment when you’ve thought, “I may have gone too far just then”?

No, never. We never just go on stage and talk nonsense. We have a serious process we undertake where we go through our material and decide what’s going to be in the show and what’s not going to be in the show. We never go onstage saying something we’re not one hundred per cent confident in saying because at the end of the day, we discuss serious matters.

Yet you playfully discuss these serious issues such as asylum seekers, Islamophobia, racial politics – even gentrification. Do you think putting these issues in a humorous context makes it easier for people to digest?

Yes definitely. It makes it easier to digest but also easier to talk about. People always assume we’re trying to change people’s opinions or make people think about things in a different way. But a lot of the time it was just us joking around with our friends and not so much about changing perceptions. When you talk about racism, inequality, et cetera – it can be depressing. So our natural survival instinct was to joke about it. It’s a reflection of how we deal with things that affect us day-to-day and not so much sugar coating the message. Do you get what I mean?

Yeah I do. Though in saying that, you’re controversial but you’re also quite likeable up on stage. How do you walk that fine line?

We don’t ever sit down and think, “We’re going to write this really controversial joke and this is going to be scary”. I think it may be controversial to some in the audience who are probably hearing these things for the first time, or hearing it being put to them in an unapologetic way. Or maybe they just feel like they’re the minority for the first time in their lives because the majority of the audience isn’t white. On the flipside, if you ask the non-white audience about the jokes we deliver they usually say it’s funny but they don’t say it’s controversial.

Do you think the non-white audience find it funny because they appreciate your bravado in vocalising shared thoughts and experiences about taboo topics?

Yeah, and that’s what a lot of comedy is – comedians pointing out things the audience already knows about. They just point out similar experiences and thoughts, pointing out the obvious to people. In Australia if you come from a minority it’s all about ‘fitting in’ – It goes against the grain in that sense – but this type of comedy has been par for the course because of that shared experience with the audience. My main goal is to express how I feel and how others around me feel and not necessarily to educate others – though if that happens, that’s great! At the end of the day, we’re just trying to make people laugh.

Your profile is growing very quickly; do you feel like your act needs to change or you need to broach more mainstream issues to appease a wider audience?

I feel like the issues we bring up will probably always be there. It’s not like: if we do jokes about them one year, we won’t be talking about them the year after. At the same time, there are also a lot of broader political issues that we touch on as well that do change from year-to-year. The thing is, the core of the act will always be centred around race – because it’s not something that will change overnight.

What’s the general reaction from people after the shows?

People overwhelmingly love it. At the beginning some people thought it was a gimmick. However, nowadays this show appeals to so many people. People who are white come to our shows; non-white, Muslim, non-Muslim. Alhamdulillah, the success we’ve had is sending a message that people want to hear this and we wouldn’t have survived this long had we not tapped into something.

How do you respond to the people that say you’re racist against white people?

Tomorrow in Part Two of Conversations with Aamer Rahman we find out exactly how he feels about Nazeem Hussain, social activism, the importance of faith and – most importantly – where Ninja Turtles fit into the story. Watch this space for the sequel: “Fear of a Funny Muslim Returns”!