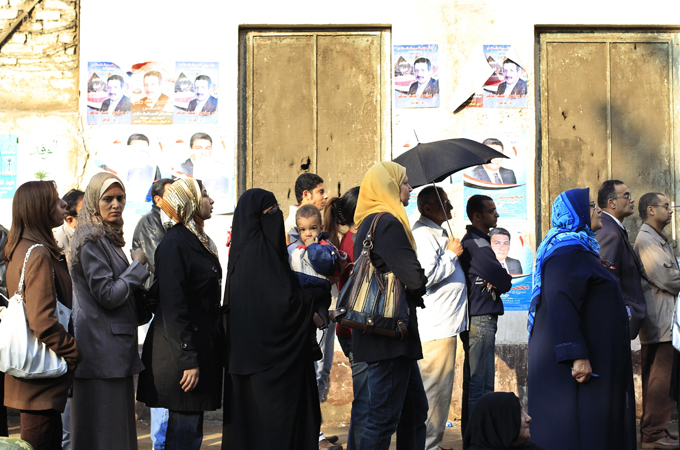 Egyptians have started casting their ballots in the first parliamentary elections since former president Hosni Mubarak was toppled in a popular uprising earlier this year.

Long queues were seen outside many polling stations amid tight security arrangements as voters flocked to the polls on Monday morning. Voting in this round of the elections last for two days.

Many Egyptians remained worried that there may be outbreaks of violence at polling stations, while others have been concerned that the nation remains polarised over the choice of candidates.

In some parts of the country, there were several logistical problems in the morning, and polling stations had not opened more than an hour after the time scheduled, as ballot papers and the ink used to mark voters’ fingers had not arrived.

“The two problems are this, one ballot papers arriving very late, secondly, judges are arriving very late [and] some not even turning up,” Al Jazeera’s Sherine Tadros reporting from Cairo’s densely populated Shubra district said.

Additionally, a ban on campaigning at polling stations has been broken, with members of parties handing out pamphlets and banners.

However, Tadros added: “The mood is very much upbeat. I really have not seen this kind of voter turnout.”

Al Jazeera’s Rawya Rageh reported from Assiut, one of the most significant governorates in the Upper Egypt region, that there appeared to be an exceptionally high turnout by the standards of the country’s previous votes.

“The lines have not stopped outside the polling centres,” she said. “If we’re judging by the turnout, this has been by all accounts a success.”

Women were turning out in high numbers, unusual for such a conservative region, she said.

There were no signs of violence or coercion, she reported, but there were campaign violations as some parties continued to campaign even as voting was underway.

Poor organisation by authorities was also an issue, she said.

High numbers of Coptic Christians were also coming out to cast their ballots, according to early reports from across Egypt.

“They’re saying they really want to make their voices heard,” Rageh said, noting many Copts were showing up to the polls in Assiut.

While some worry about the Islamist parties’ attitude to women’s rights, others in the minority group of eight million Coptic Christians are concerned  about Egypt becoming an Islamic state.

The community, the Middle East’s biggest Christian population, already argue that they suffer of systematic discrimination and they are the target of sectarian attacks.

“During the Mubarak era, all the political parties were suppressed including the Islamic parties,” 35-year-old Sami, who works at the St George Coptic church in the northern city of Alexandria, said.

“But now they are free, people here are really worried about these Islamic parties making gains in the election. Not just Hizb al-Nour [the Salafists] but also the Muslim Brotherhood,” he added.

Amr Moussa, one of Egypt’s presidential candidates, stressed that there is a real appetite for democracy in Egypt.

“This is the beginning of a new era in Egypt, democracy in action. Not in theory, but in action,” Moussa told reporters.

Voters on Monday are choosing 168 of the 498 deputies, which will form the new lower house of parliament. The vote is only the first stage in an election timetable which lasts until March 2012 and covers two houses of parliament.

In this round, some of Egypt’s most populous areas will vote, including Cairo, Alexandria, Assiut, Port Said and Luxor. Over 50 political parties are contesting the elections, along with thousands of candidates running as independents.

But the preparations have been marred by a new wave of demonstrations, as protesters continued to occupy Cairo’s Tahrir Square to demand the military council that replaced Mubarak hand power to a civilian government.

Egypt’s military ruler has warned of “extremely grave” consequences if the country does not pull through its current crisis.

Field Marshal Hussein Tantawi, who heads the governing Supreme Council of Armed Forces (SCAF), claimed on Sunday that “foreign hands” were behind the current turmoil.

In comments carried by the nation’s official news agency, Tantawi rejected calls for the SCAF’s leadership to step down immediately. Demonstrators had called for their replacement by a “national salvation” government to run the country’s affairs until a president is elected.

Tantawi instead promised the creation of a 50-member advisory council that would advise the SCAF.

At least 41 protesters have been killed in nine days of clashes across Egypt and more than 2,000 have been wounded.

The military took power when Mubarak was toppled. It has come under intense criticism for most of the past nine months for its failure to restore security, stop the rapid worsening of the economy or introduce the far-reaching reforms called for by the youth groups behind Mubarak’s fall and the ongoing protest movement.

“SCAF at the moment is the spinal cord of Egypt and they are leading the transitional process, there are other people in Egypt that do not support what Tahrir thinks.” Emad Mohsen, a member of the so-called silent majority group and former information minister, told Al Jazeera.

The SCAF never set a precise date for transferring authority to an elected civilian administration, only pledging that presidential elections, the last step in the handover process, will be held before the end of June, 2012.

Apparently alluding to the protesters in Tahrir Square, Tantawi said on Sunday: “We will not allow a small minority of people who don’t understand to harm Egypt’s stability.”