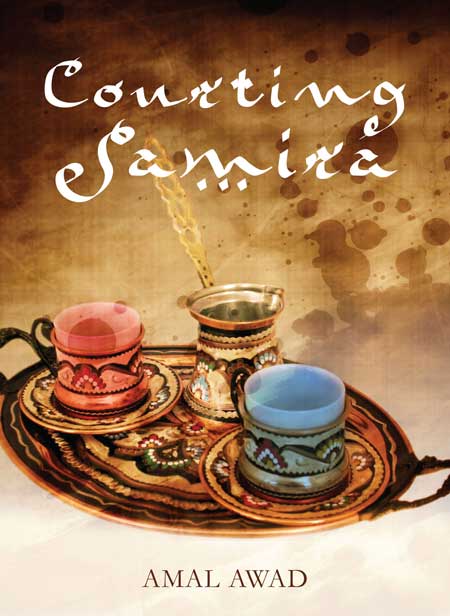 The last time you browsed through local or online bookstores, you may have come across the usual suspects. The dreaded Mills and Boon fare. Self-help books that insist men and women come from other planets. Memoirs by 16-year-old pop stars. And, of course, the most formidable genre of them all: chick-lit. Better known as ‘The Universal Women’s Hunt For “Mr. Right”’.

But how often would you come across books about Muslims trying to find love?

I recently met up with Amal Awad, a young Sydney journalist who just published her first novel Courting Samira – a humorous take on the whole traditional courtship process.  The 33-year-old also has a law background and wrote articles and online pieces for years before this first foray into the literary world.

Over a halitosis-inducing Lebanese meal in which our mutual love for fattoush was thoroughly hashed out, we discussed Amal’s novel, courtship politics and how Muslims are keeping the Regency era alive:

Did you always want to be a novelist?

I don’t think I intended it, but a part of me realised I was always going to go back to my writing. It sort of happened by accident. I wrote a humorous piece about being unemployed, years ago – I didn’t know I had that in me – and it got published in a major paper. After that I realised I had the ability to communicate in that way.

Was it the Heckler in The Sydney Morning Herald…

Yes, eventually I wrote a few of those and then I got into Frankie magazine, which was a goal of mine, and the piece was derived from the book (Courting Samira).

What does writing mean to you?

At the most basic level it’s an expression of ideas. And at a very egotistical level it’s an expression of some of my ideas and trying to make sense of the world. The biggest motivator for writing the book was the idea of being able to entertain people. I saw so much humour in what I went through and what other girls had gone through and I thought, well, this deserves to be re-told in a humorous way.

Who are your inspirations?

I have a variety, but I guess a humorous inspiration would be Marian Keyes. I read one of her books and I think if I ever thought I wanted to be a writer, it was after I read her book Watermelon.  I laughed so hard and I thought I had nothing in common with the character but I had such empathy for her and I wanted to know her. I loved that feeling and I knew I wanted to do that one day.

I love old poetry and Catch-22 by Joseph Heller.

That’s one of my favourite novels as well…

Yeah it’s great, and I also loved Gone with the Wind because it’s such an epic. I like different things, but I’m also for escapist books as well.

So what would you say are your top 3 favourite books?

That’s a hard one [laughs]. Watermelon is definitely one of them; probably Catch-22 is another one. They’re fantastic books because they depict reality in an entertaining way – not in the horribly grim way of depicting reality – and they don’t take themselves too seriously. Persuasion by Jane Austen is also one of my favourites.

Your book Courting Samira is a light-hearted look at Muslims trying to find love. Why do you think this subject appeals to so many people?

The success of chick-lit has been phenomenal and I remember whenever I read chick-lit for escapist fun, I could never really see myself in these characters because our lifestyles are so different. We don’t drink, we’re strict about relationships and I remember thinking, there’s a gap because there aren’t many stories like that about Muslims.  I kind of just randomly started writing one day and I ran with it.

The courting process seems to cause a lot of anxiety in people, why do you think this is the case?

I think it’s the fear of being alone. If everybody had a piece of paper given to them and on that piece of paper you found out the date of when you’re going to meet the person you’ll spend the rest of your life with – if you knew this information beforehand you’d probably relax and enjoy the ride. I think it’s the not knowing that causes the anxiety.

Do you prefer alternative ways to the traditional courting process — or as it’s referred to in the book as ‘the doorknock appeal’ process?

I think you have to use alternative measures these days – the world is so different now. I know people who have met their spouses online, or through university, the workplace etcetera. I don’t think traditional courtship is the way to go for everyone, though it does work for some people. I think we’ve all tried it but it doesn’t mean it’s going to work. I think, in those traditional courtship situations, you’re under pressure to make a judgment very quickly so you kind of inflate characteristics of people. For example, if he was shy he was too quiet and if he was talkative, he was incredibly loud and so on.

In the book, you make references to the idea that these courting rituals have an Austen/period piece feel to them…

[Laughs] They do, don’t they? Like many girls, I love Jane Austen’s work.  The Jane Austen references came about because I remember watching Pride and Prejudice once and there were all these rules these girls had to follow when they interacted with the men, and I remember remarking to someone at the time ‘hey it’s kind of like what we go through now’ and it just stuck with me. I guess Samira is trying to cope with this restrained environment whereas everyone else around her is free and her way of coping is latching on to the Austen thing because it gives her comfort that someone else has lived like this.

The running theme of the book revolves around family, food; culture and religion, how important are those elements to you?

Well food is very important [laughs]. My religion is very important to me and as a Muslim, it’s the central theme in my life that’s always a constant. Culture is important and I’m very proud of my Arab heritage, especially being Palestinian.  It means a lot to me.

What has been the response to Courting Samira since its release?

So far, I’ve had very positive responses.  The difficult part of the book is that it’s self-published. So I’m proud to have released it.  A lot of people are finding they can relate to the story, a lot of girls I’ve spoken to have told me they laughed so hard because they’ve all been there, in that situation where you’re meeting a guy in the lounge room and all you want to do is escape [laughs].

Were any situations in the book inspired by real events?

[Laughs] No comment!  Well, yes, parts were definitely inspired by real events, but not just mine.  Most girls will sit down and tell each other their horror stories, so I had a lot of material to work with, put it that way. I tended to change things around a bit to protect people. There are definitely elements of reality in there but I had to fictionalise it. You might think this is crazy, but it’s very hard to take real events and fictionalise them.

Truth is stranger than fiction…

Yeah, you’ve got to find a balance.

Do you think women love chick-lit because it idealises a “happily ever after” romance?

I think it’s cosy. I think it’s ‘curl up in bed with some tea and biscuits’ type of cosy.  It’s not brain surgery, it’s so simple but that’s why people like it.  It’s like Twilight… it’s pure, escapist fun and not something you can take seriously [laughs]. We all just want joy in our lives and these types of books give you joy.

How much of Samira is in you and vice-versa?

[laughs] I knew you were going to ask me that question! I think what I’ve done with her is try to take the best qualities I see in other people. I wanted her to be witty, clever, well read and sharp. Even though I sometimes find her to be complacent with her life I wanted her to have the ability to be better than that, and so I needed to make her clever. As for the similarities to me, I think I have the same sense of humour as her so if you know me, you probably imagine me reading the book to you [laughs], but that wasn’t intentional.

Were any of the characters based on people in your life?

No one was based on anyone in particular; there are people who have inspired aspects of some of the characters. Lara was inspired by a couple of girls I know – in terms of her humour and wackiness – but to be honest, you can’t just translate people in your life into characters. You more or less just pick up on certain character traits and incorporate that instead.

I found Lara hilarious, is there a possible sequel about Lara’s adventures… or misadventures?

I don’t know, now that you’ve said it, maybe? She was a lot of fun to write.

Hakeem was a familiar character to me – do you think people will relate to the various characters in the book?

I can’t say for sure but I hope so. Hakeem is definitely someone I believe exists in the real world. Menem is more idealised, he’s not the perfect character but people would be conflicted about knowing him because he’s not as deep into his religion as Hakeem is.

And the name Menem?

I thought the name was different and that’s why I liked it. I think it’s more a Lebanese name.

Who’s your favourite character in the book?

I love Samira but I thought Lara was so much fun. She’s a horrible person but I loved writing her. I really love her spirit and that she doesn’t fear much.

Are you going to stick to the genre in your next project?

No, I’ll probably head into a different direction – without saying too much.

What message would you like people to take away after reading your book?

I think we’re all just the same, and we’re all trying to make a go of it.  Marriage, births, graduations etcetera are big events – but what about all those times in between when you feel like nothing is happening?  But if you think about it, that’s when everything is happening.  How do you make sense of those in-between moments? And that’s what I was trying to communicate in the book; we’re all just the same and trying to get to the same destination, even though we’re taking different paths to get there.

If you could have dinner with anyone — past or present — who would it be?

Staying away from chocolate.

I love it when people are…

Generous with their good qualities and are not threatened by others.

My favourite quote is…

It’s from Desiderata: ‘With all its sham, drudgery, and broken dreams, it is still a beautiful world’.

I take comfort in…

I don’t see it but I’m told I look like Rachel McAdams.

You really do look like her. My party trick is…

I talk about my door knock appeals [laughs].

My ideal destination is…

When I feel sorry for myself I…

Exercise and count my blessings.

Honestly, no one. It’s enough of a journey just being you.

My philosophy in life is…

Be grateful and be positive.