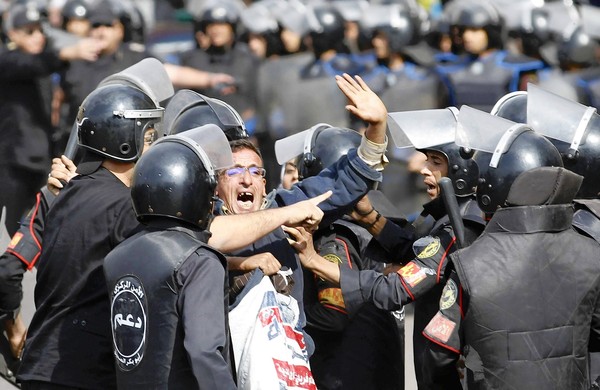 Egypt’s ruling generals have said they are prepared to hold a referendum on immediately transferring power to civilian authority if people demand it.

In a televised address to the nation on Tuesday, Field Marshal Muhammed Hussein Tantawi, head of the Supreme Council of the Armed Forces (SCAF), said the body is committed to holding parliamentary elections as scheduled, with the first round to begin on November 28, and to elect a president before July 2012.

“We ask for fair elections. We are doing our job in a very special era,” he said. “We do not care who runs for elections and who is elected president and yet we are accused of being biased,”

Tantawi also announced that he had accepted the resignation of the interim prime minister, Essam Sharaf.

As Tantawi finished his speech, a crowd reaching as many as 100,000 in Cairo’s central Tahrir Square signalled their disapproval by chanting “Irhal!” or “Leave!”.

In Alexandria, protesters confronting police faced a heavy barrage of tear gas. The street clashes continued late into the evening.

In solidarity with the protesters in Cairo, thousands gathered in the port city in front of the police headquarters as police fired tear gas at demonstrators.

“I could clearly hear the sound of stun guns to try and electrocute protesters gathered around them [the police]. ” Al Jazeera’s Rawya Rageh reported.

The concessions from the SCAF – in power since Hosni Mubarak’s forced removal as president in February – came after five days of protests against army rule in Cairo and elsewhere amid violence that has cost at least 33 lives.

Tantawi’s announcement followed a day of crisis talks between politicians and the military.

“We are hearing it loud and clear from the protesters down there that the military is under attack,” Al Jazeera’s Sherine Tadros reported from Tahrir Square.

“Tantawi spent 80 to 90 per cent of the time saying how good the military is handling the transition. He’s not saying anything about the military tribunals, or the many who are serving trials.

“There is nothing about investigating the military’s conduct on the street and their conduct with the labour movement and the student movement.”

Protesters in Tahrir Square said the situation had only become worse since February’s uprising.

“Thie entire movemennt over the past few months has been about putting the military in check. There is no accountability,” Gharbeia said.

The protesters gathering in Tahrir Square on Tuesday were said to be answering a call for a million people to join the mass demonstrations and intensify pressure on SCAF to hand over power.

As the day progressed, clashes spread to adjoining areas of the Cairo public square as police confronted the protesters with a heavy hand.

Ambulances weaved through the crowds to take injured people to makeshift field hospitals.

Al Jazeera’s Mike Hanna, also reporting from Tahrir Square, said: “There are tens of thousands virtually from across Egypt’s political spectrum who have gathered here.”

The Muslim Brotherhood was the only major political group that had announced it would not be at Tuesday’s demonstrations. In a statement the group said it did not want to be involved in a protest that could delay the November 28 vote.

Earlier, sources said the SCAF had approached Mohamed ElBaradei, a presidential hopeful and opposition politician, to form a new interim government. ElBaradei was said to be hesitating over assurances regarding his authority to choose cabinet ministers.

The office of ElBaradei, considered a political liberal, did not attend the crisis meeting but had reportedly been in touch with the military.

Criticism of the military has grown in recent days. Amnesty International said the SCAF had “been responsible for a catalogue of abuses which in some cases exceeds the record of Hosni Mubarak”.

In the report published on Tuesday, the UK-based human-rights watchdog said Egypt’s military rulers had “completely failed to live up their promises to Egyptians to improve human rights”.

The US, for its part, made its most critical statements yet, with Jay Carney, the White House spokesperson, describing the violence as “deplorable” and urging that elections take place on time.

Victoria Nuland, the state department’s spokesperson, condemned the “excess of force used by the police” but said the US had been reassured by Tantawi’s speech.

Referring to the renewed unrest in Egypt, Al Jazeera’s Hanna said: “Certainly the violence we have seen leaves a lasting mark on the protesters and on the society as a whole.”