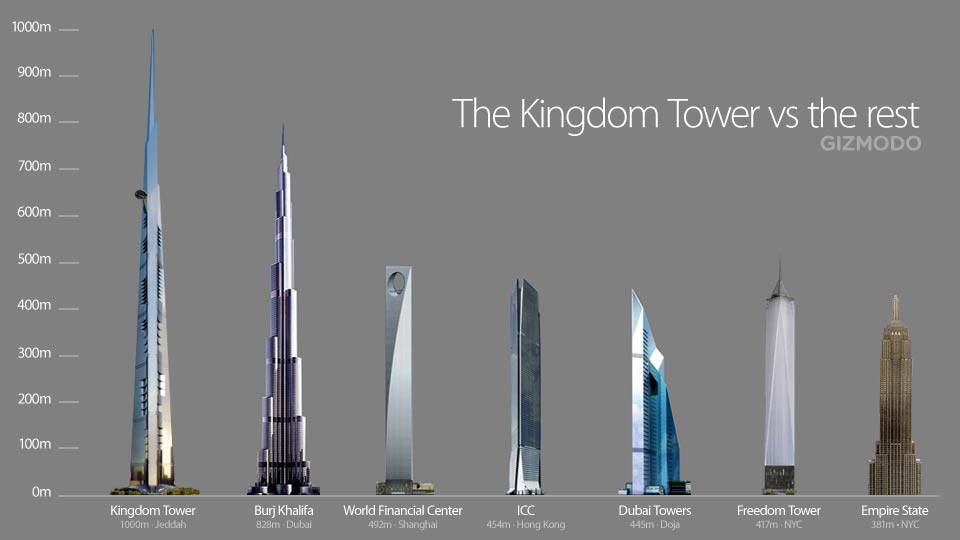 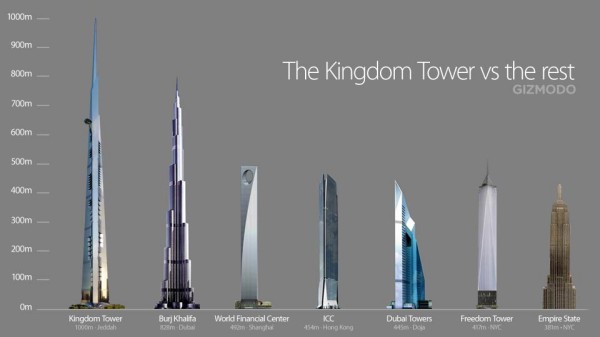 Construction is to begin in January on a 1km tall tower in Jeddah, including a six-storey “sky palace” on the 158th floor, the lead architect says.

The much talked about Kingdom Tower, which at a height of one kilometre will surpass Dubai’s Burj Khalifa as the tallest in the world, is scheduled to begin construction by January next year.

Most of the permits are in place for the US$1.2 billion (Dh4.40bn) Kingdom Tower, which would be the tallest building in the world, said Adrian Smith, a partner in Adrian Smith + Gordon Gill Architecture.

“The project is moving rapidly,” Mr Smith said in an interview with The National. “We have actually advanced the design to a high level of detail.”

In August, Kingdom Holding, the company chaired by Prince Al Waleed bin Talal, hired Saudi Binladin Group to build the tower. But Mr Smith’s comments are the first word that construction is ready to start on the project, which has been in development for years.

Kingdom Tower was one of several super-tall buildings for which plans stalled after the global financial downturn. The group includes the 1km-tall Nakheel Tower in Dubai and the 473-metre tower in St Petersburg for the gas company Gazprom.

Saudi Arabia’s property industry has not been immune to the downturn. Construction slowed on several large-scale master-planned “economic cities” designed to diversify the economy.

“They have suffered from a lack of private-sector interest in investing in them,” said Mike Williams, the senior director for CB Richard Ellis. “But there is a drive to get them restarted.”

Kingdom Tower is the centrepiece of Kingdom City, a $20bn commercial and residential project designed to cover 5.3 million square metres outside Jeddah.

Even after the August announcement that the contractor had been hired, some analysts remained sceptical the tower would move forward.

Standard & Poor’s yesterday forecast that growth in Saudi Arabia would slow next year, based on declining oil prices and decreases in government subsidies.

But Mr Smith says work on Kingdom Tower will proceed.

“We know that all the partners have agreed to get going,” said Mr Smith, who will be in Dubai next Tuesday to speak at the Green Build Congress. “Everything is proceeding as though it’s going to happen.”

Mr Smith also revealed details of the design, which includes a single, 2,787-square-metre apartment that will start on the 158th floor and cover six levels, making it the highest residence in the world.

The apartment will sit above a 25-metre-wide “sky terrace”, a platform that will extend out from the 157th floor of the building. The designers still do not know exactly how the terrace will be used.

It might simply be landscaped and used as a platform “where you can step out and observe the sun setting over the Red Sea”, Mr Smith said.

The terrace was originally designed as a helipad, but pilots vetoed that idea.

“As we were talking to pilots, there was a good deal of scepticism about being able to consistently land with wind conditions at that height,” Mr Smith said.

He was the lead designer with Skidmore, Owings and Merrill on the Burj Khalifa in Dubai, at 828 metres the tallest building in the world.

Kingdom Holding is not giving an exact height of the planned Kingdom Tower, in the same way the height of Burj Khalifa was a closely-guarded secret during construction.

The company will say only that the tower will be “more than 1,000 metres” and there is not an exact number of storeys.

Four floors were recently added to the design of the base of the spire that sits at the top of the building, Mr Smith said. The new floors will be used for “boutique” offices.

“And the balconies are in the neutral zones between legs, that is a fairly quiet zone from a wind perspective,” Mr Smith said. “We think they are going to be more usable” than balconies on many other tall buildings.

Plans call for Kingdom Tower to house a mix of residential, office and retail space, in addition to a Four Seasons hotel.

Some analysts have questioned the economic viability of a large tower in Jeddah, where rents and sale prices are far below those of international cities such as London and New York.

But economic studies show the building can make a profit, Mr Smith said. The tower will also increase the value of the surrounding buildings and land.

“Land values do go up around buildings that are very tall,” Mr Smith said