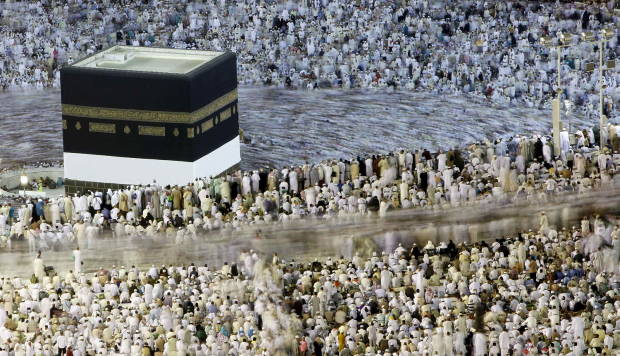 By Thursday November 3rd, the vast majority of the 1.8 million pilgrims from around the world will have arrived in Mecca, Saudi Arabia, to participate in the hajj, or pilgrimage. The Saudi authorities estimate another 800,000 pilgrims from within the kingdom will be taking part.

Hajj is the fifth pillar of Islam. The pilgrimage to the birthplace of Islam is undertaken by many Muslims at least once in their lifetime so long as they can afford it and they are physically able.

The hajj is a demanding journey that follows a circuit of about 40 kilometres over several days. And before setting out on that journey on Friday, pilgrims will perform the umrah, or the ‘lesser pilgrimage’, at the main mosque, or Masjid Al Haram, in Mecca.

What is involved in the ‘lesser pilgrimage’? Pilgrims perform seven circles around the Kaaba, the black cube structure at the centre of the mosque. It is the most sacred structure in Islam and said to have been built by the Prophet Abraham and his son Ishmael. Inside the mosque, pilgrims will also run between the hills of Safa and Marwaa, recreating the steps of Hagar as she ran in search of water for her infant child Ishmael; they will drink from zam zam, the well that sprang from where the infant Ishmael hit his heels in to the ground.

The road to Mina will be packed as more than two million pilgrims make the 8 kilometre journey in buses and cars to this tented city and staging point for the following day. For pilgrims this is the start of their pilgrimage. And for many, it will feel like a stop-and-start trip, because of the sheer volume of traffic. Saudi authorities actually advise that pilgrims might be better off walking the distance.

Pilgrims aim to arrive in Mina during daylight hours, engaging in worship and rememberance along the way. They will stay overnight in designated air-conditioned tents that hold between 20 and 40 pilgrims. Pilgrims will have access to power points, cooking facilities, toilets and showers. Their thoughts will be on the crucial next day.

Saturday – Arafat & the Mount of Mercy

Pilgrims will perform their dawn prayers and then journey over 14 kilometres from Mina to the plain of Arafat and the Mount of Mercy. They will be wearing the same white attire that they took on before arriving in Mecca. At Arafat, they will offer prayers and seek forgiveness from their creator. They will reflect on their lives and loved ones they have left behind. This is a deeply emotional time for pilgrims.

The gathering of pilgrims on the plain of Arafat mirrors the Day of Judgement story in which Muslims believe that all of humanity will be assembled on a scorching plain and judged by its creator.

As the sun sets, pilgrims leave the plain of Arafat for Muzdalifah.

Exhausted and drained, pilgrims will sleep under the stars in the plain of Muzdalifah. Although their day in Arafat represents a key part of their pilgrimage, their hajj is not yet complete.

In Muzdalifah, they gather stones for the next stage of their pilgrimage.

Shortly after sunrise, pilgrims leave Muzdalifah for Mina and proceed to the three stone pillars that represent satan. Each pillar is a reminder of the three temptations faced by the Abraham as he was about to sacrifice his son Ishmael.

Pilgrims cast small stones and pebbles at the pillar as a symbolic rejection of temptation and satan. Saudi authorites have built a vast complex around the pillars so that pilgrims can fulfil their pilgrimage rights on various levels and avoid the crushes that have killed people in previous years.

While the pilgrims continue their hajj, Muslims worldwide celebrate the festival of Eid ul Adha on this day. It is a commemoration of Abraham’s willingness to sacrifice his son, and God’s mercy.

After the ritual stoning of the pillars, male pilgrims shave their heads and female pilgrims cut a lock of hair to represent a new beginning, a rebirth, after completing the key stages of the hajj. They must also sacrifice an animal.

In the past, pilgrims were required to arrange for an animal. However, the sheer number of pilgrims in recent years means that they now purchase a voucher on arrival in Saudi Arabia and this ensures that an animal will be sacrificed for them and the meat shared with the poor.

Over the next three days, pilgrims must journey once more to Mecca to the Kaaba and spend several days engaging in the ritual stoning of the pillars in Mina before their hajj is complete.