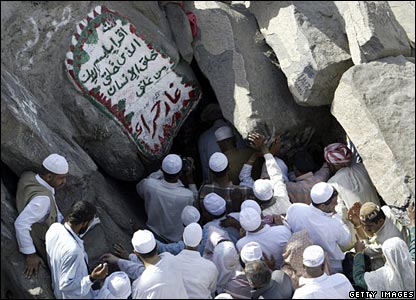 MECCA, Saudi Arabia – As Muslims from all over the world congregate for the annual haj pilgrimage, some are defying the edicts of Saudi Arabia’s strict Wahhabi school of Islam by climbing al-Nour mountain in the hope of attaining spiritual favor.

Tucked under slabs of granite near the top of the 660-meter mountain on the outskirts of the sacred city of Mecca, dozens of pilgrims jostle for a glimpse of the Hera’a cave where they say God first revealed the message of Islam.

Muslims believe it was in this cave, near the peak of al-Nour, where 1,400 years ago the Archangel Gabriel told the Prophet Mohammed that he was the messenger of God with the command: “Recite!”

Between 2.5 million to 3 million pilgrims are expected to arrive in Mecca by Friday to perform the haj, a duty that all able-bodied Muslims must undertake at least once in their lifetime.

Red-faced and panting, men and women of all ages made their way up the mountain, some chanting prayers under their breath, others grunting with pain from the steep climb.

“This is a sacred place… I struggled getting up here but it was a nice kind of struggle,” said Asma Mohammed, 30, when she reached the top, beads of sweat dotting her flushed face. “I had this sense of reverence as I was climbing.”

“I feel closer to the prophet because (I followed) his paces,” she said, resting on a granite boulder near the cave, as the setting sun shone on her face.

Abdulrahman al-Assaf, a Syrian pilgrim, proudly lifted his thoub to show a prosthetic leg that had carried him up the mountain in an hour, not much longer than it took more able-bodied men.

“I came up here to pray because this is where the prophet prayed,” he said. “I did not feel any pain, thank God.”

Despite the cave’s importance in Islamic history, al-Nour mountain is largely neglected by the authorities. Visits are also discouraged by religious police to ensure that pilgrims practice Islam according to the Gulf monarchy’s strict interpretation.

Wahhabi scholars believe that praying at important sites in Islamic history, or at the tombs of prominent Muslim figures, risks devaluing the monotheistic purity of their religion.

“We guide the visitors to inform them… and warn against wrong practices like praying in the cave and the belief that it is sacred or blessed,” a member of the religious police stationed at the foot of al-Nour told Reuters by telephone.

“In terms of all historic sites, visiting is permitted but not when it is accompanied by wrongful practices or a belief that these places are sacred,” he said.

On Sunday, a Canadian Shi’ite cleric was arrested in Medina after a scuffle with the religious police at a popular cemetery near the Prophet Mohammed’s mosque. He was later released.

Reuters saw no members of the religious police on the al-Nour mountain, but one climber said he saw them stationed at the foot of the mountain, preaching to visitors preparing for their ascent.

“They had a banner that explained that visiting Hera’a is not part of the haj and it is forbidden to pray there or seek grace by touching the stones,” said Hassan Khudur.

Upon arrival to Mecca, visitors perform their Tawaf al-Qudum by circling the sacred cube-shaped Kaaba seven times, reciting prayers along the way.

On Friday, the first official day of the haj, all pilgrims are expected to start their journey to Mina — a small village east of Mecca — where they will spend the day worshipping before heading to Arafat, a rocky hill nearby.

Pilgrims later travel to an open plain called Muzdalifa, between Arafat and Mina, to collect pebbles which they will throw at pillars representing Satan on the last day of the pilgrimage, celebrated with the Eid al-Adha holiday on Sunday.