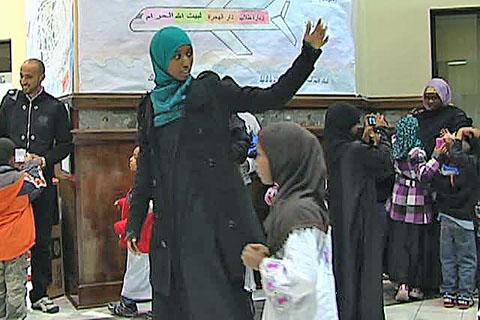 More than 1.5 million Muslims from around the world have gathered in Mecca for the Hajj, the annual pilgrimage, which begins later this week.

At a Washington area mosque, American Muslim children learn about this pillar of their faith in a fun way.

Hafsa Abdelrahman leads the children of the Dar Al-Hijrah weekend school into a mock-up of the Muslim holy city Mecca. They circle the Kaaba shrine. They do it again, and again, and again.

It’s just the first part of a multi-stage ritual that in real life takes five to six days to complete.

“We take them through every step just as if they’re [going through it]. Their parents come also because they get a chance to learn about the steps, and we teach them all the steps, the historical significance, the background story, everything that goes with it,” said Abdelrahman.

Abdelrahman went on a true Hajj as a teenager.

“And I can really say that it changed my life, completely changed my life. I had the chance for the first time – here in the U.S. being a Muslim and being covered – you’re a minority. But for the first time, when you’re in Hajj, you’re surrounded by thousands of men and women from all over the world that are dressed like you, and you no longer feel like an outsider,” said Abdelrahman.

The children of this Islamic school have spent several weekends on projects like this to recreate Mecca in this mosque. So their excitement is perhaps understandable.

They visit the tent city, and stone the pillar that represents the devil.

Abdelrahman said few of these children have actually made the journey.

“And so I think it’s really important for them to get a chance to see it here. And hopefully from these activities will build a love within them that they will strive, they’ll save up the money, they’ll do everything that it takes, so that they do end up performing the Hajj,” she said.

And no doubt they will take with them sweet memories of their first make-believe Hajj.