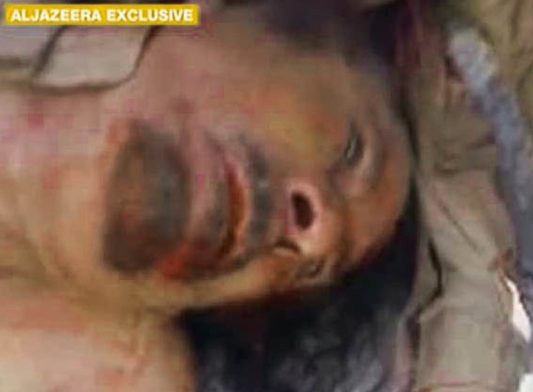 Shortly before dawn prayers on Thursday, Gaddafi surrounded by a few dozen loyal bodyguards and accompanied by Abu Bakr Younis Jabr, the head of his now defeated army, broke out of Sirte where his loyalists had been embroiled in fierce gun battles with NTC fighters for two months.

Gaddafi headed west in an armed convoy of 15 trucks, but did not get far. NATO said that one of its aircrafts struck the convoy near Sirte at about 8:30 am on Thursday.

Gerard Longuet, French defence minister, later confirmed that the attack – which destroyed all 15 trucks and killed 50 of Gaddafi’s men – was executed by the French air force.

However, Gaddafi himself and a handful of his men escaped death and appear to have run through a strand of trees towards the main road and hid in two drainage pipes.

Gaddafi and his men attempted to hide from a unit of NTC fighters who had pursued the convoy, but were quickly located.

“At first we fired at them with anti-aircraft guns, but it was no use,” Salem Bakeer, a member of the NTC fighters’ unit, said. “Then we went in on foot.

“One of Gaddafi’s men came out waving his rifle in the air and shouting surrender, but as soon as he saw my face he started shooting at me,” he told Reuters news agency.

“Then I think Gaddafi must have told them to stop. ‘My master is here, my master is here’, he said, ‘Muammar Gaddafi is here and he is wounded’,” Bakeer said.

At the time of capture, Gaddafi was already wounded with gunshots to his leg and to his back, Bakeer said.

Other government fighters who said that they took part in Gaddafi’s capture, separately confirmed Bakeer’s version of events, though one said the man who ruled Libya for 42 years was shot and wounded at the last minute by one of his own men.

“One of Muammar Gaddafi’s guards shot him in the chest,” Omran Jouma Shawan said.

In the video, a bloodied and dazed Gaddafi can be seen being propped up by two NTC fighters, as others grab at him and cheer “God is Great!”.

The leader’s bodyguards were all killed.

After his capture, Gaddafi was placed in an ambulance bound for the city of Misrata. Witnesses say that he succumb to his wounds while on the road.

However, Prime Minister Mahmoud Jibril told a news conference on Thursday that Gaddafi was not fatally wounded when placed in the ambulance, but killed when crossfire broke out in mid transport.

“Gaddafi was taken out of a sewage pipe … he didn’t show any resistance. When we started moving him he was hit by a bullet in his right arm and when they put him in a truck he did not have any other injuries’,” Jibril said.

“When the car was moving it was caught in crossfire between the revolutionaries and Gaddafi forces in which he was hit by a bullet in the head.

“The forensic doctor could not tell if it came from the revolutionaries or from Gaddafi’s forces.”

While it is not clear what happened afterwards, another amateur video, presumably shot by an NTC fighter, shows alifeless Gaddafi being dragged on the floor and sprawled out for a cheering crowd of fighters to see.

Gaddafi’s body was later loaded into a truck and taken to an undisclosed location.

“Gaddafi’s body is with our unit in a car and we are taking the body to a secret place for security reasons,” Mohamed Abdel Kafi, a NTC official in the city of Misrata said.

The final irony of Gaddafi’s life, which was strewn with eccentric and often-ironic anecdotes, was not lost on the victorious fighters, who Gaddafi had often decried as “rats”.

“He called us rats, but look where we found him,” Ahmed al-Sahati, a 27-year-old fighter, standing next to a drainage pipe were the former leader was found, said.