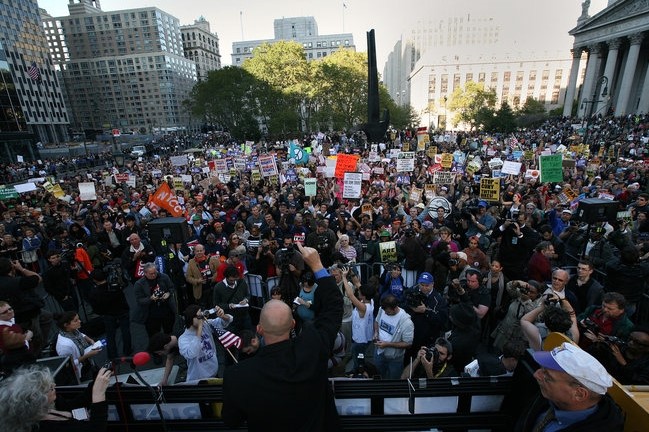 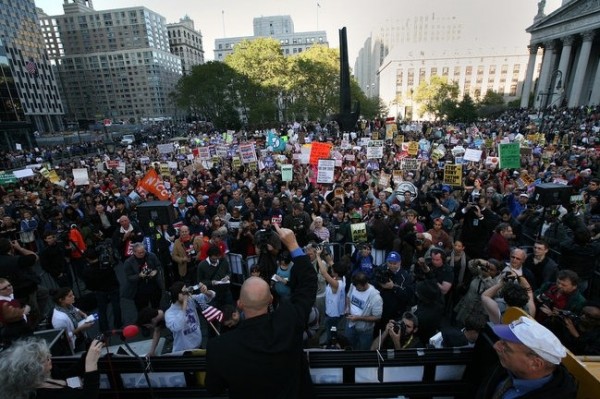 The growing Occupy Wall Street movement has gained attention as a popular expression of general discontent with the inequities evident in modern western finance. However, it has been criticized for lacking focus and presenting no coherent alternative.

Could more Muslim participation be of further help?

Because without question the movement was inspired by the non-violent, world changing protests of Egypt’s heroic citizens in Tahrir Square. In fact, Occupy Wall Street’s website states on the front page,

“Occupy Wall Street is leaderless resistance movement with people of many colors, genders and political persuasions. The one thing we all have in common is that We Are The 99 Percent that will no longer tolerate the greed and corruption of the 1 percent. We are using the revolutionary Arab Spring tactic to achieve our ends and encourage the use of nonviolence to maximize the safety of all participants.”

Now, I know a viable take on macro-economic reality isn’t what Islam is best known for in America, but Muslims actually did a pretty fair job of managing world-commerce for a few hundred years.

And that failed for much the same reason as most good things do: not because the principles were wrong, but because self-serving leaders found ways to manipulate them to their own advantage, regardless of the results for the rest of us.

But honestly? The same thing could be said about the current failures of western finance, that the responsibility rests squarely on the shoulders of the self-serving captains of Wall Street, today.

Here’s the newsflash though: regardless of our faith background, or lack thereof, the different perspectives we bring to the bargaining table might actually complement each other and help make things better together. Because all the good economic models seem to follow three simple principles:

Wondering how a Muslim perspective can complement a non-Muslim one? Well, although Islam forbids riba (often translated as “interest”), it allows other equally rational means of providing access to capital in return for a predictable reward. For instance, a so-called “Muslim Mortgage” creates a partnership between a home’s resident and that home’s financier, with both sides exposed to the same potential benefit and risk. If the value of the house goes up and the partners choose to sell, both come out ahead. If it goes down and they sell, they don’t.

Conventional “Western” mortgages, on the other hand, fix both risk and reward solely in the hands of the home’s resident owner. And if that makes a lender risk-complacent while encouraging an owner to pile on risk in hopes of a windfall, tragedy often ensues.

Since most of us blame the bursting of America’s real estate bubble for triggering The Great Recession, I think it’s fair to ask whether it would have occurred with a more Islamic model in place.

A little “old-style” rabbinical input might have helped too: Who couldn’t come out ahead with their debts forgiven every few years?

However, it’s the hardships that have ensued — and the feeling that they’ve been suffered mostly by those of us who live on Main Street — that are behind Occupy Wall Street. Because when it comes to growing an economy, no one but Wall Street thinks Wall Street is on the same side as they are anymore.

The problem is hedging: a complex suite of financial techniques that make money even when everyone else is losing money, generating income in the absence of growth and perhaps even from preventing growth from happening in the first place.

It’s always been easier to take money than to make money, if you can figure out how to get away with it, and it’s actually legal on Wall Street. But eating from your neighbor’s fridge instead of filling your own? I don’t think you need to be a financial wizard to realize what a stupid growth strategy that is.

The thing is, that’s what the Quran and both Bibles — Jewish and Christian — say is the worst thing about gambling: it brings no increase because it only makes money from the losses of others, shrinking the pot for everyone. Just like Wall Street’s fancy bankers. And whether you believe that’s from God’s mouth or the collected wisdom of a thousand human generations, it’s worth noting that they all agree that those practices only make for hard feelings, just like we’re seeing toward Wall Street.

Because Wall Street’s leaders seem today no better than gamblers living off our losses, the men we have entrusted with floating our boats instead sinking them, siphoning off our economy’s lifeblood instead of helping it grow, gaming away all our futures with their fancy futures financing, all for the sake of their own short term rewards.

Frankly, our leaders should tell our bankers it’s against the law, what they’re doing. But they don’t. Ever.

Tags: 99% are Christian economy's Jewish muslims ninety nine percent occupy occupy wall street Religion should street the too? wall Washington we we are the 99%