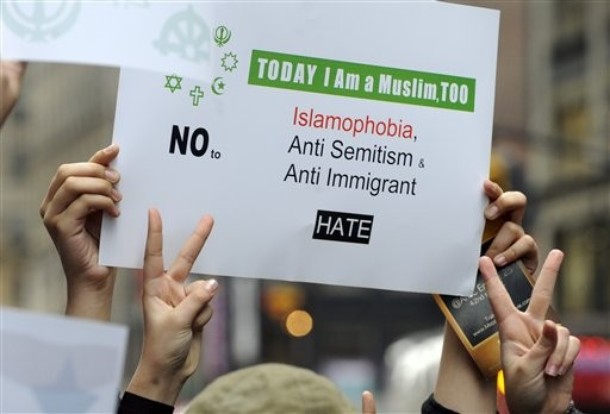 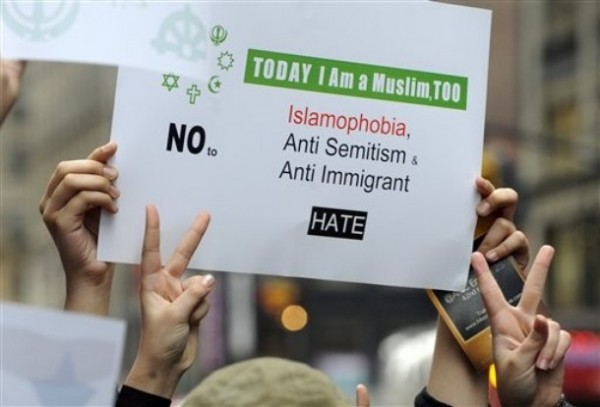 I sat down outside the crowded airport gate and breathed a sigh of relief at having reached my plane on time.  At last I could relax for a few minutes.  It had been a long day and I was eager to get home.  But while my arrival had been relieving for me the people sitting on the bench beside me weren’t so pleased.

My seatmates were a family: a mother and father and two small boys.  The older of the two boys was sitting next to me while his parents were a little further down the bench.  The boy himself glanced over at me and then, disinterested, looked back at his video game.  His parents, on the other hand, couldn’t take their eyes off of me.  They would look, then whisper to each other, and then look again – a glint of suspicion in their undisguised stares.

This went on for five or ten minutes until finally the mother came over and, without even looking at me, picked up the boy and made him sit away from me.

In my last moments at my parents’ house I wondered if I had made a mistake.  The idea had sounded good in my head: to dress as a traditional Muslim on my plane ride home in order to try to learn something of what it might be like to be a Muslim in America, but when it finally came down to it I wondered if what I was doing wasn’t just a little foolish.

What if something serious happened?  And – perhaps more intimidating – what if nothing happened?  What if this whole thing ended up as just a crazy idea that nobody paid any attention to?

The questions didn’t go away as I walked into the restroom at Charlotte Douglas International Airport and slowly took off my jeans and collared shirt.  From my bag I pulled out the clothes that would completely transform me in the eyes of everyone around.

The simple white kufi was a gift from a Somali friend of my wife’s who laughed and laughed on hearing about my little “experiment.”  The white gallibeya I had gotten on a trip to India but never worn while in America.  I put them on, still hesitant, unsure but also determined that I’d go through with what I’d told everyone I would. 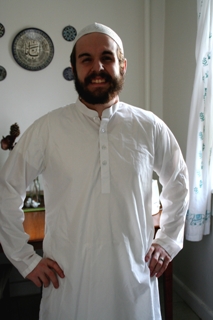 Only seconds after walking back out into the terminal one thing was for sure – I would definitely have something to write.  As I walked through the airport every eye followed me.  Most people tried to be subtle: when I caught them staring they would quickly look away.  A handful, including the first guard at the security checkpoint, weren’t so quiet about their feelings.  The guard stared and stared at me – not necessarily with a look of hostility but definitely with suspicion.  His gaze said: why are you here? You don’t belong here…

I grew tense, wondering what the security screening would be like.

Fortunately on that count my hesitations were unwarranted.  Every security person was extremely polite to me.  I’ve flown on many airplanes and never had the security personnel make such an effort at conversation.

It wasn’t anything substantial; one asked how I was, another commented on one of my wife’s Christmas gifts sitting at the top of my bag, but I appreciated it and it made me feel more comfortable.  They did open my bag and swipe it with a chemical swab for explosives, but all the while I felt that they mostly just looked apologetic.

But the politeness of the security people was only a temporary break in the constant gaping stares that met me everywhere else. They were the same stares that I remembered from traveling abroad, from busses in India and trains in Egypt when I traveled in areas where tourists typically didn’t go.

They weren’t stares of anger or hatred or even necessarily hostility, just of otherness.  They were stares that in a moment separated me from the people staring.  They told me that I was different, strange, alien, not a part of the group.  It would be impossible, looking like I did, to ever seem normal to the people around me.  I would always be strange and different.

It was unsettling to feel this way in my own country, surrounded by people whose lives, though they didn’t know it, were largely the same as my own.  What must it be like to be an American Muslim and have this feeling all the time?

I had always connected this experience with another country and could comfort myself in thinking that this sensation of being an alien was just a part of being a foreigner. There was a home for me where I could easily fade into the crowd and mix with people just like me.  But what about those who are looked at as foreigners in their own country?  Over the years I imagine it becomes exhausting.

Fear of Muslims is very real and it will be a long time before a man can wear a kufi and gallibeya or a woman wear a hijab and have no one think of them as strange.

In the end nothing dramatic happened during my experiment – I was never pulled off a plane, no one tried to get me arrested.  And there was no clear message or lesson that I could pull out of the trip.

I felt strange and alien, and there were moments that saddened and shocked me, but there were also many moments where people, especially the airport employees, made an extra effort to reach out to me.

The parking lot cashier’s eyes lit up when she saw me and she asked me where I was from with a big smile on her face.  I wasn’t sure what to say so I just said: “Here.”  She commented that she had a lot of Muslim friends from Yemen and wished me a good evening.

So I think if I gained an insight from my experiment it’s that no explanation can easily encompass the situation of Muslims in America.  Fear of Muslims is very real and it will be a long time before a man can wear a kufi and gallibeya or a woman wear a hijab and have no one think of them as strange.

But if anything my faith in the American people has been deeply strengthened.  Bigotry remains but it is a fading phenomenon and far outnumbering the bigots are the people in my country who are open, warm, and welcoming to all those around them – even Muslims.

Tags: Christian as a Muslim Today I am a Muslim too