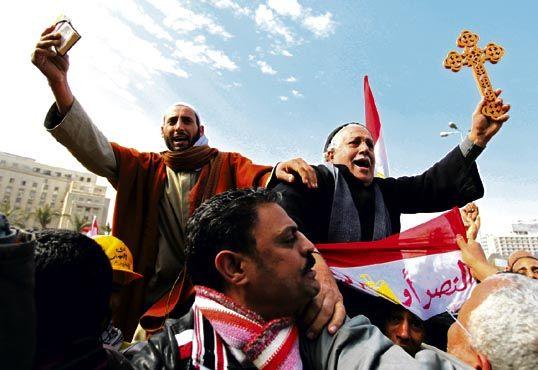 He toured Cairo’s Tahrir Square, the hub of the historic uprising, then hosted a meeting of about 10 youth movement leaders who had driven the revolt.

For almost 90 minutes the group discussed everything from what Australia could do to help – encourage more tourists – to how Egypt could hold an election without electoral infrastructure.

But there was one subject some of the young people avoided – relations between the country’s majority Muslim community and minority Coptic Christians.

Every time one of the group raised it others jumped in. “We can talk about that later,” one said. Another added: “That’s an issue for another time.”

It was obvious that any discussion of the sensitive subject could ruin the entire session.

Events of the past week have shown why this issue is so sensitive. Few other internal conflicts have such potential to drag Egypt into a new round of sectarian bloodshed.

The flare-up this week left 26 people dead – mostly Coptic Christians – and hundreds injured. It was triggered when militant Muslims set fire to a Coptic church.

Following that, hundreds of Christians joined moderate Muslims for a protest against religious violence.

Muslim hardliners attacked the protesters, who believe the Egyptian security forces made little effort to protect them.

Indeed, security vehicles drove straight into some of the crowd, leading to several being crushed.

“This is a huge crisis that could end in a civil clash, it could end in dire consequences,” warned Amr Moussa, the leading candidate for president.

Academic Ali Qleibo, from Al Quds University in Jerusalem, has no doubt that outside influences are inflaming tensions.

“You can be sure that someone from somewhere is doing it,” he said.

Dr Qleibo says he does not know exactly who is fomenting the discontent but he is certain it is being stoked by supporters of dictatorships in the Arab world.

“The message is intended for others in the region to say you may not be happy with your state of affairs but it could be worse: that everyone thought things were bad under Mubarak but look at what is happening now.”

Dr Qleibo said Iran and Saudi Arabia had an interest in showing democracy may not be desirable.

Coptic Christians make up about 10 per cent of Egypt’s 83 million people. The events of the last week have heightened a view among Copts that people can commit violence against them and go unpunished. The Coptic church said; “Strangers got in the middle of our sons and committed mistakes to be blamed on our sons. The Copts feel that problems are repeated and the perpetrators go unpunished.”

Dr Qleibo supports his argument that the targeting of Copts is new by pointing to the fact that some of Egypt’s most famous citizens – such as former UN chief Boutros Boutros-Ghali and actor Omar Sharif – are Christian, although Sharif converted to Islam.

“In Egypt they are seen first and foremost as Egyptians,” he said. “Christianity is part of their identity but not a defining element.”

Boutros-Ghali warned in January of efforts to create tensions between Christians and Muslims.

Al-Qa’ida has declared publicly it will target Christians in Egypt.

Referring to the New Year’s Day suicide bombing in Alexandria that killed 21 Copts, Boutros-Ghali wrote in The Wall Street Journal: “Whether this heinous act was carried out by Egyptians or by terrorist groups from outside the country, the intention was surely the same: to sow discord between Muslims and Christians in a country long known for its religious tolerance.”

The violence of the past week has put further pressure on the ruling military council. Parties on the left and right have said it shows the importance of having elections soon.

The Muslim Brotherhood – now operating as the Freedom and Justice Party – criticised both the ruling military council and the interim cabinet for not dealing adequately with the crisis and said presidential and constituent assembly elections should be held simultaneously.

Dr Qleibo said that in the longer term, Egyptians would not allow new tensions to destroy democratic aspirations.

“Egyptians are one of the most sophisticated people on earth,” he said. “You’re not talking about some backward place like Yemen but rather one of the oldest civilisations.”