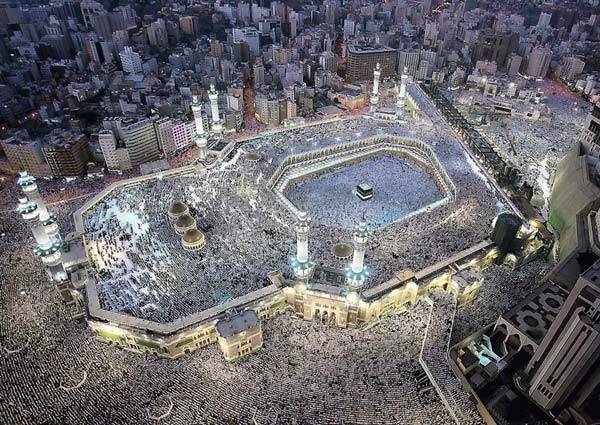 The classroom was fairly bare – a state college on a low budget couldn’t afford many luxuries.  There were seven or eight of us in the class, our small number dwarfing the room intended for thirty or forty students.  I was the newcomer, coming in during the class’s second term after studying for a term in Egypt.

Our teacher was a well-dressed Moroccan man in his 40s named Ayman with a quiet voice in English but a firm and strong voice in Arabic, the language he was teaching us.  It was the first time the other students had seen him since the previous term and soon after he had walked into the room the questions began: “Tell us about your trip!  What was Makkah like?”

Ayman got a distant look in his eyes and said: “Like nothing you can imagine.  Everyone together, moving as one, Muslims from everywhere in the world…I can’t describe it.”

Ayman had just fulfilled a life-long goal and performed Hajj.  And while I had learned a lot of information about Hajj in classes about Islam, this was the moment when I truly began to understand the significance of Hajj for Muslims.

Looking into our teacher’s eyes, seeing the soft smile on his lips, I knew that he was no longer in the classroom; that in his mind he was back in the Great Mosque, dressed in white, walking in slow circles around the Ka’bah as a part of the 3 million crowd who joined together by their faith.

It was an experience that had changed his life and would stay with him forever.

To an observer unfamiliar with Islam, the practice of Hajj may seem to be the strangest and most archaic aspect of Islam.  In particular, people of a background similar to my own, Protestant Christians, if they’ve heard of Hajj they would tend to view it with suspicion and a feeling of superiority.

Many Protestants feel very strongly that faith must come directly from the heart and see any kind of ritual as fake at best and dangerous at worst.We largely gave up the practice of pilgrimage – travel to a holy place – as a part of a more general denial of ritual and religious form.  The Protestant tradition argues that God is present in every place and if we can pray to God in our homes then doing strange rituals in a special place considered “sacred” is foolish.

I think there’s a lot to be learned from these views.  One of the most central parts of Christianity, one of the things that I as a Christian most deeply value, is the idea of a relationship with God: that God desires to know us and be known by us in a personal way that goes deeper than any set religious ritual.

But getting to know Muslims like Ayman or many others with whom I’ve spoken since then has truly opened my mind to the power of such ceremony and ritual. How these, far from being an obstacle to a relationship with God, can be one of the most meaningful ways in which we grow close to God.

And the most moving of these rituals, the stories that I love to hear over and over again, are the stories of Hajj.

One of the most powerful stories of Hajj is one that I haven’t even heard first-hand but in the written words of a man who died before I was born: the African-American Muslim Malcolm X.

In his autobiography Malcolm X writes about his philosophy before going on  Hajj – a philosophy under the name of Islam which believed that the only way to achieve rights for African-Americans was through violence because all white people were devils who would forever be seeking to control and oppress the black man.

Malcolm X was one of the most powerful spokespeople for this philosophy but found his views transformed when he traveled to Makkah for Hajj and found millions of people, of every race on earth, gathered as one, wearing the same clothes, performing the same actions, all joined together to show their devotion to God.

He describes his deep shock at feeling for the first time that he could be joined in something with a white man. Malcolm X returned to America no longer preaching hatred and violence but preaching the true values of Islam as a faith which could overcome all barriers between people.

This unity is the most powerful lesson that I have learned from hearing my friends’ stories of Hajj.

When our world is full of conflict and division over religion and its interpretations Hajj is a beautiful picture of how God can draw all people together.

The rituals may sound old-fashioned and quaint to an outsider, but to those who go and to those who listen to the Hajj stories they become beautiful pictures of how people who live and think differently can leave behind all the complex questions of who is right, of who is powerful, of who has money or influence, and become as we all truly are: people standing before God. All alike in our need for God’s mercy and love and seeking to obey Him in the ways He has proscribed for us.

It’s an example I find inspiring.