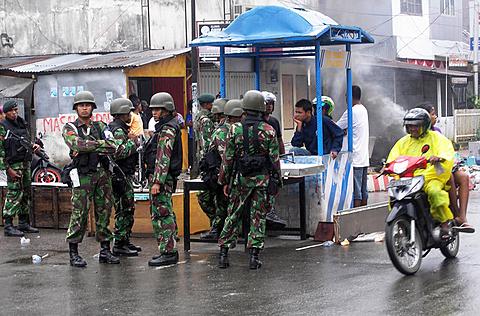 Soldiers stand guard along a road after Sunday's riots in Ambon September 12, 2011. Several people were killed and dozens injured when riots broke out on Sunday after rumors spread online that a motor taxi driver was tortured to death by a group of residents.

The Indonesian government has blocked 300 websites it calls extremist after several recent sectarian clashes. Despite the effort, hundreds more sites cataloging the glories of jihad are still readily available online.

In a country where online social networks are growing fast, some analysts say a better method of countering hate speech may be through the online tactics of religious moderates.

On September 11, seven people died and hundreds of homes and vehicles were burned in a deadly riot in Ambon, eastern Indonesia after the death of a Muslim man led to rumors he had been captured and tortured by Christians.  Those rumors spread through cell phone text messages, and on Twitter and Facebook.

Following the attack, strident websites such as Arrahmah.com, displayed messages pleading for better weapons and more fighters.  The site was founded by Muhammad Jibril, a leader of Jemmah Islamiyah.

Another website says that as long as Muslims continued to be oppressed in Ambon, suicide bombings such as the one in Solo in late September will continue.

Terrorism analyst from the International Crisis Group Sidney Jones says social networking sites are an important way for jihadists to reinforce their ideology and stir up emotion.  But he adds that blocking them is not the answer.

“Three hundred sites have been blocked, but the most dangerous ones are still there and upgrading, so it’s not clear what goal is being served,” Jones says. “Also, it’s true that if you block a site, another site pops up by the same people in about six hours, especially with the proliferation of blogspots and so on.”

When the group of Ambonese Muslims and Christians known as the “peace provocateurs” heard rumors that a church had been destroyed, they took a photo of the undamaged church and circulated it on social networking sites.

Jones says such efforts prevented the conflict from escalating any further.

“I think in this case in Ambon, there were people that were skilled in the use of text messages, Twitter and Facebook actually taking tendentious rumors and proving that they were false and getting that information out through social networking sites immediately, deploying people in some of the worst-hit conflict areas and so on,” says Jones. “That is a great way of countering that and in some ways a far more effective way than trying to shut down websites.”

Slamet Effendy, a leading figure in one of Indonesia’s largest Muslim organizations, Nadhatul Ulama, condemns the sectarian conflict in Ambon and the suicide bombing in an East Java church.

Noting that social networking sites could be a good way to promote tolerance, he says that much more is needed to combat terrorism. Terrorism in Indonesia, he says, can only be eradicated if religious understanding is in line with the state, which advocates pluralism and a society founded on justice and welfare.  Comprehensive efforts to develop good relationships between religious communities are needed at the grassroots level, Effendy says.

In the meantime, millions of Indonesians have come online in recent years as Internet access has improved.

Although some Muslim clerics were initially skeptical of online networks and their impact on morality, the country now has more than 40 million Facebook users, second only to the United States.