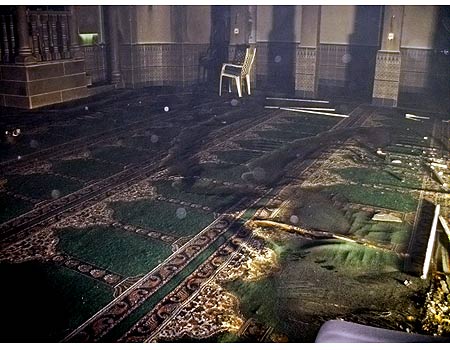 Fire Damage in the mosque was extensive

JERUSALEM //Extremist Jewish settlers torched a mosque in northern Galilee early yesterday in the latest of an escalating series of attacks.

The blaze incinerated the interior of the mosque in the village of Tuba-Zangria and desecrated copies of the Quran.

The arsonists left behind graffiti reading “price tag” – the calling card of right-wing settlers in their campaign of intimidation in retaliation for Israel’s dismantling of some West Bank settlements.

The settler violence has also coincided with the Palestinian bid to win UN statehood recognition, which could place Israel’s settlements in legal jeopardy.

Several high-level Israeli officials condemned the arson yesterday. The pro-settler prime minister, Benjamin Netanyahu, was said to be furious when he saw photos of the attack, and condemned it.

At least two other mosques have been vandalised in the past month. The incident in Tuba-Zangria, a village of Palestinian citizens of Israel, is rare since it occurred inside Israel’s internationally recognised borders.

“The prime minister was furious when he saw the pictures, and said that the incident contradicts the values of the State of Israel – such as freedom of religion and freedom of worship,” Mr Netanyahu’s office said.

He called the pictures “horrifying” and said such incidents “have no place in Israel”.

Shimon Peres, Israel’s president, noted that the attack took place during the Jewish holiday season, which he described as a “time for reflection”, and said it was “a difficult day for the entire Israeli society”.

As many as 300 residents of Tuba-Zangria marched in anger on a road junction close to a nearby Jewish community yesterday. Security personnel fired tear gas and stun grenades to disperse the demonstrators, who police said were throwing stones and setting tyres on fire.

Most clashes, however, have so far been contained in the West Bank, where both Israeli and Palestinian officials have noticed a rise in such incidents.

As many 30 activists were wounded in a confrontation with residents of the Anatot settlement last week. Videos of the incident posted online purport to show settlers punching activists and slashing them with knives.

Some Palestinian communities have responded by forming vigilante groups to protect themselves from settlers.

Israel’s security agencies have expressed concern that settler attacks have expanded from their usual Palestinian targets and taken aim at military personnel and Israeli citizens critical of the settlement enterprise.

Last month an Israeli military base in the West Bank was vandalised and the Jerusalem home of an Israeli activist at the Peace Now organisation was spray painted with the “price tag” graffiti.

Meanwhile the US secretary of defence, Leon Panetta, warn Israel about its growing international isolation.

The warning came after Mr Netanyahu’s government infuriated world leaders with a surprise announcement last week that construction on more than 1,000 settler homes in East Jerusalem would be advanced.

“It’s pretty clear, at this dramatic time in the Middle East when there have been so many changes, that it is not a good situation for Israel to become increasingly isolated. And that is what has happened,” Mr Panetta said on his way to the region for separate meetings with the Palestinian Authority president Mahmoud Abbas and Mr Netanyahu.

Cautioning Israel over diplomatic fallouts with Turkey and Egypt, he said “security can only be achieved by both a strong diplomatic effort as well as a strong effort to project your military strength”.

He also repeated US opposition to the Palestinian UN strategy and preference for negotiations.

“The most important thing they can do is go to the negotiating table,” he said. “You are not going to achieve Middle East peace by trying to slam-dunk it at the UN. The only way you’re going to achieve it is by negotiations.”