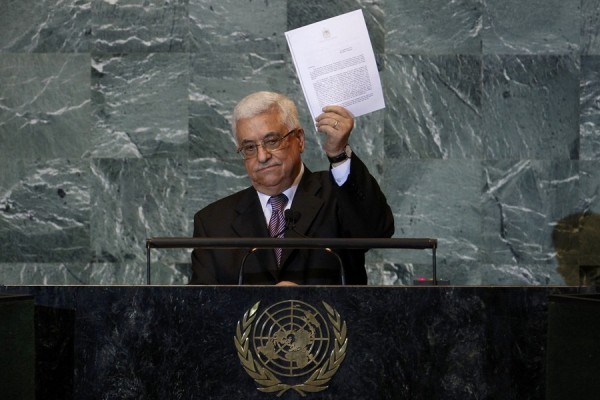 The Palestinian president Mahmoud Abbas has formally presented a request for the United Nations to recognise Palestine as a sovereign state.

Mahmoud Abbas has formally asked the United Nations to recognise a Palestinian state, defying intense US pressure to abandon the move with a powerful appeal to the conscience of the world to recognise that the Palestinian people are entitled to their own “Arab spring”.

Abbas was greeted with extended applause as he told the UN general assembly that he is seeking recognition of a Palestinian state on land occupied by Israel since 1967 with East Jerusalem as its capital because nearly two decades of peace negotiations have failed.

“I do not believe that anyone with a shred of conscience can reject our application for a full membership of the United Nations and our admission as a full member state,” he said. “At a time when the Arab people affirm their quest for democracy – the Arab spring – the time is now for the Palestinian spring, the time for independence.

“It is a moment of truth and my people are waiting to hear the answer of the world. Will it allow Israel to continue its occupation, the only occupation in the world?”

The Israeli prime minister, Binyamin Netanyahu, responded in an uncompromising speech to the UN by saying he was seeking a “just and lasting peace” with the Palestinians but he would not jeopardise the Jewish state’s security.

“The Palestinians should first make peace with Israel and then get their state,” he said.

The Israeli prime minister attacked the UN as a “theatre of the absurd” unfit to decide on whether there should be a Palestinian state.

“Hezbollah-controlled Lebanon chairs the UN security council. A terror organisation presides over the body entrusted with world security. You couldn’t make this stuff up,” he said.

Abbas submitted the request for UN recognition to the secretary general, Ban Ki-moon, shortly before his speech. The security council is unlikely to act soon, in part because the Palestinian leader has privately agreed for a vote to be deferred while fresh attempts are made to revive the peace process. Washingont has said it will veto the request.

The Palestinian leader said he had come to the UN because the existing American-dominated peace process to end the “colonial military occupation” had failed and a new approach was required.

“It is neither possible, nor practical, nor acceptable to return to conducting business as usual, as if everything is fine,” he said.

Abbas’s determination to press ahead with an attempt to win recognition of an independent Palestine in the face of strong US opposition has prompted the most serious attempt to revive the peace process in years as Washington, London and Paris sought to avoid a showdown in the security council that could compromise their efforts to forge relations with the new governments emerging from the revolutions of the Arab spring.

Days of diplomatic wrangling in a compromise that has created a small window of opportunity, with a vote in the security council effectively on the slow track, to get new peace talks off the ground.

The Middle East Quartet of the UN, EU, US and Russia responded on Friday with a proposal for talks intended to reach a framework agreement by the end of next year. The French president, Nicolas Sarkozy, has also proposed talks within a year-long timetable.

Tony Blair, the Quartet envoy, said the proposal is a substantial change from previous plans because it requires that two major issues – borders and security – be addressed immediately with each side’s comprehensive proposals to be submitted within three months.

That met Abbas’s demand in his speech that any future negotiations have “clear parameters” and a specific timetable to prevent Israel dragging them out. But the Quartet proposal was a watered down version of issues under discussion earlier in the week. It failed to address a Palestinian wish for a call for an immediate halt to settlement construction nor Israel’s demand that it require recognition of it as a Jewish state.

Neither was it clear that the Quartet proposal meets Abbas’s call for a break with the tried and failed framework of negotiations – meaning Washington’s grip on mediation particularly since what was seen as a partisan pro-Israel speech by Barack Obama to the UN on Wednesday. Sarkozy also said that American oversight of negotiations had failed and called for a greater role for the Europeans and Arab countries which have made peace with Israel.

Abbas told the UN that Palestinian previous efforts to reach an agreement have been “repeatedly smashed against the rock of the positions of the Israeli government”. In particular he blamed the continued construction of Jewish settlements which have doubled in size since the 1993 Oslo peace accords.

“The occupation is racing against time to redraw the borders on our land according to what it wants and to impose a fait accompli on the ground that changes the realities and that is undermining the realistic potential for the existence of the State of Palestine,” he said

“This policy will destroy the chances of achieving a two state solution upon which there is international consensus, and here I caution aloud: this settlement policy threatens to also undermine the structures of the Palestinian Authority and even end its existence.”

Netanyahu said that the Palestinians were in conflict with Israel long before settlement construction began in 1967.

The Israeli prime minister rejected Abbas’s assertion that the problem lies with the Jewish state. He said Israel had made sweeping peace offers in the past met with rejection and terrorist attacks by the Palestinians. He said that Israel’s withdrawal from Gaza, and the closure of its settlements there, had brought not peace but war.

“Yes, hopes and dreams and missiles,” he said.