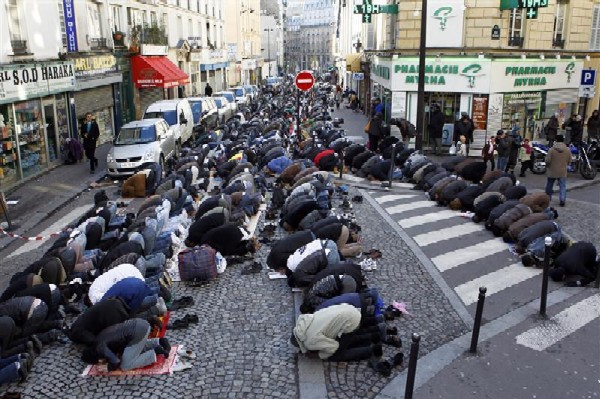 I’m going to quote the infamous axiom of Australian boganism as I call it, on a political level, “please explain France?”

France has done the unimaginable – banning Muslims from praying in public. I had to refresh my server when my eyes first laid eyes on this breaking news online. Now I have a supposition.

Even the most cynical must concede that if a young couple can engage in a French kiss in a buzzing cafe overlooking the Eiffel Tower, then surely a Muslim man praying under a tree in a quiet park, a few hundred metres away is innocuous!

The French government has banned the practice of praying on the street as of last Friday. In France the strict separation of church and state has been in force for a century, where public displays of religious activity are despised. When you consider the demographic of Europe, France counts the largest Muslim minority of any European country with a 5-million-strong Muslim community.

An impartial observer can see that the purpose of this new law is a political manoeuvre to appeal to right-wing voters less than a year before Presidential elections. One need merely to look at the political discourse ensuing. Claude Gueant, the Interior Minister was quoted as saying “prayers in the street are unacceptable, a direct attack on the principle of secularism.”

He cited the government’s defence of the republic’s secular values as reason for the new policies. Marine Le Pen, the leader of the far-right National Front, who I’d suggest is the Australian equivalent of the outspoken bigot Pauline Hanson, has labelled praying in public as part of the “the Islamisation of France”.

No one can claim special privileges on the basis of religion. Certainly France is a secular country however freedom of religion is a constitutional right. Article 4 of the Declaration of the Rights of Man and of the Citizen, (a fundamental document of the French Revolution, which funnily enough fails in addressing neither the status of women nor slavery, nonetheless) still holds constitutional value today stipulates:

Liberty consists in the freedom to do everything which injures no one else; hence the exercise of the natural rights of each man has no limits except those which assure to the other members of the society the enjoyment of the same rights. These limits can only be determined by law.

I guess this validates the French kissing phenomenon but how about a simple 5 minute act of prayer? Ok let’s add a large Friday congregation of hundreds of worshippers to the equation. Well the reasoning of Gueant is that “street prayers must stop because they hurt the feelings of many of our compatriots who are shocked by the occupation of the public space for a religious practice.”

That’s downright preposterous in many regards. Firstly, to deem it an “occupation” is a typical display of fear-mongering on part of the government and linguistically the word “occupation” for many French is associated with the Nazi invasion during World War II. Secondly, I never knew that prayer was such a hurtful sigh to the eyes of observes. At least Muslims place their foreheads on the ground as a gesture of humbleness and submission before God. I’d like to see the day when ordinary non-Muslims would place their foreheads on the ground! Now that would be a spectacular sight!

My chief concern is that this move by the right-wing conservative government led by Nicolas Sarkozy will have profound ramifications. For a government to put intentional roadblocks in front of their Muslim populace, illegalising a common practice in the name of secularism could have potentially devastating repercussions in the long run.

“I am afraid there will be a climate of anarchy,” were the sentiments of a prominent imam at a mosque in Paris. No doubt there will be Muslims who will continue to pray outside, defiant of the discriminatory authorities they are ruled by. “No system in the universe can control us aside from Allah,” – is the response of an adamant Muslim man.

I’ve always been had an avid interest in French culture, history and its social fabric. After all France has always been the centre of cultural creation for centuries, with icons ranging from old masterpieces such as the Mona Lisa to the French figures Auguste and Louis Lumiere (known as the Lumiere Brothers) who created the cinema in 1895.

However, just as the US government did their own people a disservice by deciding to invade Iraq and Afghanistan in a decade long “war on terror,” leaving thousands upon thousands of innocent Muslim civilians dead, displaced or in turmoil. Then people wonder why anti-US sentiment is so rife amongst Muslims worldwide.

Unfortunately, following France’s controversial banning of the full-face veil and now praying in public, one can only wonder what the future holds for Muslims in that country.

If the French government, in its attempt to rally far-right sympathisers to President Nicolas Sarkozy’s centre-right camp is willing to take extreme measures of removing religion from the public sphere then they should be prepared for being the catalyst of a wave of vigilante mentality that will sweep the country and anti-French sentiment that will sweep the world. This hardline tick the box approach as opposed to a practical and authentic approach to dealing with this issue could prove detrimental to France’s global reputation.