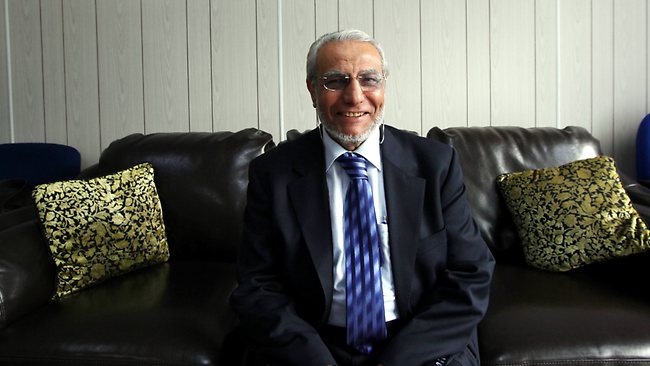 HOMEGROWN Muslim radicals are like “ill” patients in need of guidance and whose extremism is often fuelled by examples of injustice abroad such as the simmering conflict between Israelis and Palestinians.

Australia’s new Grand Mufti, Ibrahim Abu Mohamed, said young Muslims who were in the orbit of extremist preachers must be “corrected”.

Speaking just days after his appointment, Dr Mohamed said homegrown radicalisation, considered by security agencies to be the most serious terror threat confronting the community, was the result of a distorted view of Islam.

“Our duty is to clarify those matters,” Dr Mohamed said through an interpreter.

“An extremist is like an ill person, an unhealthy person. You need to cure him and find the right cure for him more than just to destroy him and finish him off.”

Dr Mohamed, who was born in Egypt, was elected Grand Mufti by the Australian National Imams Council. He takes over from Melbourne-based Sheik Fehmi Nagi El-Imam, who retired because of ill health.

The role of Grand Mufti has often been a controversial one.

Dr Mohamed has earned a reputation as a bridge-builder between Australia’s disparate Muslim communities. One law enforcement source contacted by The Australian described the Islamic scholar as “highly respected and very influential”.

His appointment came 10 years almost to the day after the September 11 terror attacks, a moment he agreed had created “a gap” between Muslims and the wider community.

“It made a lot of Muslims apologise over a matter they had nothing to do with, or as a matter of fact they were totally against,” he said.

Nevertheless, Dr Mohamed suggested there was a relationship between Western foreign policy and the homegrown threat.

Referring to the Israel-Palestine dispute and the recent push by the Palestinian Authority for UN recognition of Palestinian sovereignty, he said justice must have “one face”.

“Unfortunately we play with a two-faced justice, that we strengthen the strong and weaken the weak,” he said.

On the controversial subject of what role, if any, sharia should play in Australian society, Dr Mohamed urged perspective.

He said the Islamic legal code was largely misunderstood. The more extreme examples, such as punishments, formed only a small part of Islamic law.

Dr Mohamed said many of the values enshrined in sharia corresponded with Australian values.

“Sharia also calls for freedom, justice, right of speech and this is something we are very fortunate to have,” he said.

“These are all matters that we already implement here as Australians, and we’re proud to have it as Australian values.”

AUSTRALIANS should not be scared of Sharia law because it is consistent with our own culture and values, the country’s new Muslim leader says.

Dr Ibrahim Abu Mohamed yesterday said his goal as the Grand Mufti of Australia was “clarifying the misconceptions about our religion”.

He said debate was clouded by misunderstanding and a focus on the more extreme punishments, such as a death penalty for Muslims who convert to another religion.

“It’s not fair that you just look at one element out of a hundred elements in the Sharia law and make that element to be the most important thing,” he said.

“We see a lot of the Australian culture and values are part of our Sharia law.

Dr Abu Mohamed insisted the Muslim community believed in a democratic system: “We are a democratic nation, and whatever the majority votes for is what goes.”

He also hit out at talk that radical groups were drawing young Muslims to extremism and violence, saying “evilness always had followings”.

“Extremism and radicalisation is not just in Islam and among Muslims, it does exist in all societies and all communities,” he said.

He also said Australian troops in Afghanistan had the potential to inflame passions in the community, adding: “It is a nature of mankind that if there is any oppression upon any nation that our emotions start to move and react.”