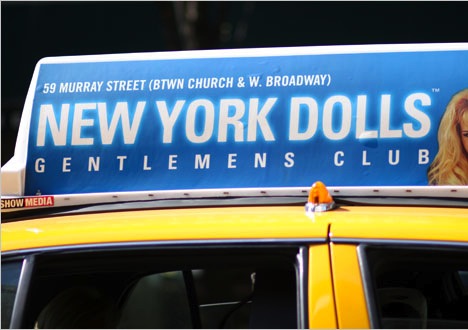 After a long struggle against the racy ads on the roof of their taxis, Muslim cabbies in New York have won the right to veto the content of the ads on their cars. “We are Muslims, and we do not like the ads!” cabby Mohamed Tahir, 66, told The New York Post.

“If I had another ad, I’d change it right away!,” said Tahir, whose taxi is topped with an ad for a strip club.

“It bothers many of us.”

Tahir was jubilant that New York’s Taxi & Limousine Commission agreed to give cabbies who own their cars the right to veto the content of ads atop their taxis.

“The driver ought to have the ability to say no to that,” said TLC Commissioner David Yassky. Previously, cabbies had to display any images their bosses told them to.

“If you’re a taxi driver who owns his or her own car, you take it home, your neighbors see it,” said Yassky.

“This is an appropriate and measured step that gives the driver the authority to screen out ads.”

Muslim cabbies were embarrassed by the racy ads on the roofs of their cars.

“As a human being, if you carry something so explicit, so bad, so exposing sexually, I feel bad,” cabby Mohammed Jamil Hussain said, reported The Wall Street Journal.

“I’m carrying something that young kids are noticing.”

Cabby Mohan Singh recalls how his 6-year-old granddaughter told him she wanted to be a “dancer” after seeing an ad for a dancers club atop his taxi.

“The car was parked in my driveway, and the advertisement was there for FlashDAncers,” he said.

“And my granddaughter said, ‘I want to be a FlashDancer.’”

The Muslim cabby also recalls how his taxicab had elicited a similar response from an 8-year-old nephew.

“We should keep [the advertisement] there to tell the children that it is good?” he asked angrily.

Osman Chowdhury, a longtime cabby and leading member of the Bangladesh Society in Queens, recalls how the racy ads prevented him from frequenting the mosque for prayers.

“People getting out of the mosque would see the disgusting things.

“The law is now on our side!” a jubilant Chowdhury said of the new rules.