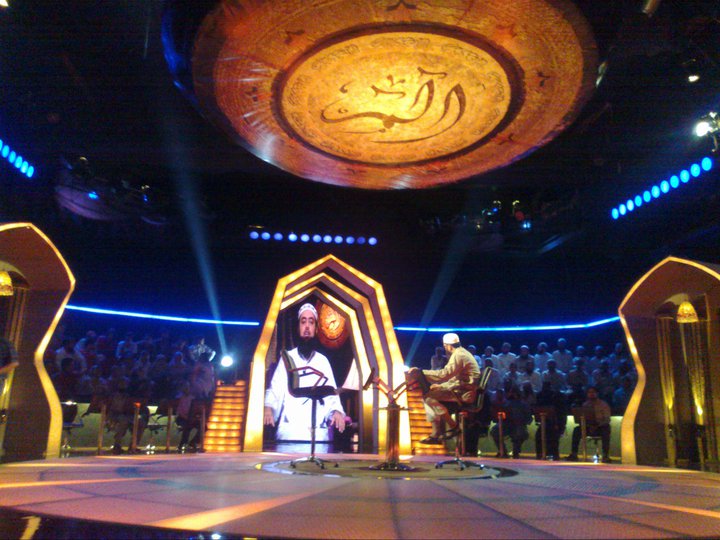 The program’s burgeoning popularity mirrors the broader direction of Pakistan.

FOR a game show, the opening is subdued. The melodramatic music and garish set are somehow familiar, but more apparent than the similarities are the differences.

The audience is almost exclusively men. The few women wear headscarves or burqas.

The host, bearded, and wearing a white prayer hat and long kurta shirt, solemnly welcomes his guests “who come here for knowledge and prosperity”, and offers to pray for them.

This is Pakistan’s newest TV game show, Alif, Laam, Meem, the Islamic version of Who Wants To Be a Millionaire.

In the few months since its debut in June, it has become one of Pakistan’s most popular shows.

Every Monday at 9pm, up to 40 million people tune in, and such is its popularity, episodes were played every night during Ramadan, airing just after fasting broke, at 7.30pm. Geo TV, Pakistan’s largest broadcaster, estimates 40,000 people applied to be contestants in the first weeks.

But the show’s emergence, and its burgeoning popularity, mirrors the broader direction of Pakistan, founded as a secular democracy, but where religion is increasingly dominating all areas of life.

Pakistan once had a secular version of Who Wants To Be a Millionaire, which ran at the zenith of the franchise’s global popularity between 2003 and 2004.

Kya Aap Banaingay Crorepati? (Do you want be a 10-Millionaire?) was hosted by a clean-shaven man in a tailored suit, and contestants played for money, following the familiar format of increasingly high stakes versus increasingly challenging questions.

While the set is almost identical, and the program logo similar, the prizes include, as well as more modest amounts of money, a Haj pilgrimage to Mecca for two.

Geo TV says the show’s aim is to “impart knowledge of religion in its entirety”. The name, Alif, Laam, Meem, is taken from the first three Arabic letters of the Koran and the questions are based largely on Islam. “According to AD Calendar, we are in 2011. What year is it according to the Hijri calendar? Options: 1422, 1427, 1432 and 1437,” host Junaid Jamshed asks a woman wearing a burqa.

“1432 Hijri,” she answers correctly of the Muslim calendar.

“It’s unfortunate that people are not using Hijri calendar and don’t know dates according to it,” Jamshed says. “In madrasas it is taught but in schools it is not.” The host of Pakistan’s newest iteration of a decade-old game show has trod a similar path to his program. In the ’80s and ’90s, he was a beardless pop idol, front man for a hugely popular group called Vital Signs.

But in 2004, he renounced secular music and devoted his life to Islamic study and prayer.

Now he has a new, devout, demographic of followers.