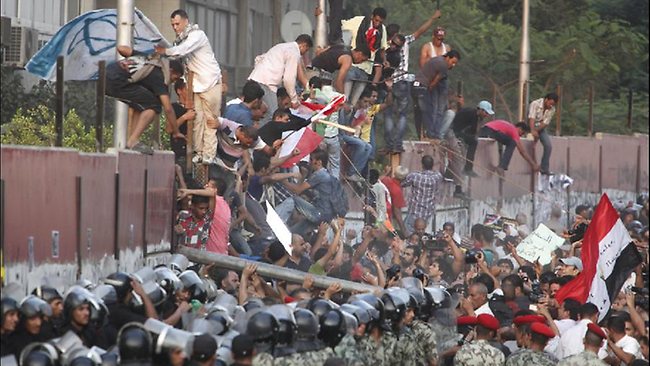 Violent protests in front of the Israeli embassy in Cairo have left more than 200 people injured. Picture: AFP Source: AFP

The anxiety caused by the Arab Spring among the Israeli public became a reality this weekend, when protesters broke into the Israeli Embassy in Cairo, and expelled the Israeli diplomats from their country.

The embassy staff’s urgent evacuation in a special IAF plane in the wake of President Obama’s intervention is a stark reminder of the 1979 Islamic Revolution in Iran. Seven months after the downfall of Hosni Mubarak’s regime, Egyptian protesters tore to shreds the Israeli flag, a symbol of peace between Egypt and its eastern neighbor, after 31 years. It seems that the flag will not return to the flagstaff anytime soon.

The historians who will write about the collapse of the Israeli-Egyptian peace treaty will start their stories during the twilight years of the Mubarak regime, when the government gradually lost control over the Sinai Peninsula, turning the desert into an abandoned frontier of weapons smuggling, human trafficking, and African refugees.

The demilitarization agreements, which removed the Egyptian army from Sinai and were slowly eroded following Israel’s disengagement from the Gaza Strip, have accelerated sharply in the last several months. Time after time, Egypt requested and received permission to “temporarily” deploy more troops and weaponry along the border, in order to restore order and security in the region.

For the Egyptians, this was an opportunity to shake off the limitations imposed on them by the peace agreement, and regain their full sovereignty over the buffer zone that lies between the Suez Canal and the Negev.

In the 70s, when the peace accords were signed, the Egyptian military’s presence in Sinai posed a great security threat. Now, Egyptian soldiers seem like the lesser evil and an antidote to the much larger threat of a political and security vacuum across the border.

Prime Minister Benjamin Netanyahu is concerned that the Sinai Peninsula will turn into a larger version of the Gaza Strip, full of weapons and launching pads aimed at Israeli territory. The fence that Israel is building along the Egyptian border is intended to ensure routine security measures aimed at preventing terrorists and refugees from spilling over the border. Israel will not be able to handle the strategic dangers that are bound to unfold on the other side.

The “embassy crisis” exploded in the wake of the killing of five Egyptian soldiers on August 18 during a border skirmish that came on the heels of a terrorist attack against Israeli civilians on their way to Eilat.

The Tahrir protesters and Egyptian politicians, frustrated with the slow pace of regime change, have directed their anger toward the most hated target in Cairo – the Israeli Embassy. Defense Minister Ehud Barak’s public expression of regret, and the Israeli promises to cooperate with Egypt in investigating the incident did not interest the Egyptian public.

The protests continued, and a week after the expulsion of the Israeli ambassador from Ankara on similar grounds – anger stemming from the killing of Turkish citizens aboard last year’s Gaza flotilla – the Israeli ambassador was expelled from Cairo. The only difference is that in Turkey, the government initiated the downgrading of ties, while in Egypt the people did so against the will of their rulers.

Netanyahu and his government have prided themselves on their steadfast commitment to national ideals, and the prime minster is convinced that he was right in refusing to apologize to the Turks for killing their citizens. According to his perspective, the Arab world scrutinizes Israel’s actions, and an apology to Turkey would be interpreted as a sign of unforgivable weakness.

But Netanyahu was not content with merely refusing to apologize. Instead of attempting to calm the conflict with Turkey, Israel was dragged into a dangerous battle with Ankara.

Turkish Prime Minister Recep Tayyip Erdogan threatened to send a Turkish naval fleet to accompany the next flotillas to Gaza, and Netanyahu responded with a widely-covered visit to an Israeli naval base. Foreign Minister Avigdor Lieberman, who consistently outflanks Netanyahu from the right, suggests, publicly, that Israel aid the PKK Kurdish insurgency, in order to balance out Turkey’s support for Hamas.

Netanyahu and Lieberman are heroes of the media, but when the chips are down, it turns out that Israel has no direct influence on Egypt. Thus, Netanyahu must resort to asking for help from Obama, his great opponent, in order to evacuate the embassy employees. Once again, it becomes clear that Israel cannot manage without help from the United States.

Netanyahu now hopes that Israel might be able to get close with Saudi Arabia and the other Gulf States, who also seek to block the possibility of an Arab Spring in the region. In the West, Netanyahu is hoping to circumvent Turkey by strengthening ties with Greece, Bulgaria and Romania. During his visit to the Balkans, he was shown photos and statues of national heros, sent to their deaths by the Ottoman Empire. A real basis for friendship.

These are but minor comforts. The political tsunami that Ehud Barak foresaw has come true prior to the unilateral declaration of a Palestinian state in the UN. Israel is left isolated facing Iran, Turkey and Egypt, which in the past were considered close allies. Netanyahu is convinced that the Arab Spring uprisings are a decree of fate, leaving Israel with little to do but to stand firmly in its place.

Israel cannot prevent the rise of Erdogan or the fall of Mubarak, the same way that it cannot halt Iran’s nuclear weapons program. The fall of the American superpower is not Netanyahu’s fault. But he has not done a thing to mitigate the fallout from the aforementioned developments. Israel’s political and strategic positions are far worse under his leadership.