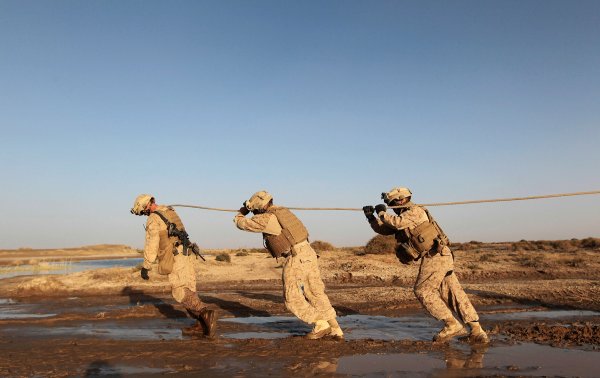 This weekend will mark the 10th anniversary of 9/11, the day that changed the United States forever. There will be remembrance ceremonies in many cities and towns. In many cases, they will be accompanied by military displays, to remind everyone that the America of George W. Bush and Barack Obama responded with anger, striking first against Afghanistan, which had given Osama bin Laden shelter, and then against a number of other nations that were either considered to be somehow complicit or that harbored their own brands of terrorists. It is a war that once begun could only grow larger as the perceived threat of terrorism grew from a lucky and opportunistic blow against the United States into something much larger, resulting in an international crusade to crush dissent and remake governments in a considerable part of the globe. At this point, the war continues with no end in sight.

If the war to remake the Muslim world is ever to be considered objectively rather than emotionally and possibly reined in, it is necessary first to determine just how much it has cost. Some of the numbers are easy to obtain. Seven thousand four hundred and ninety-four American and allied soldiers have died in Iraq and Afghanistan. The impact on civilian populations is more elusive, however. It is estimated that at least 30,000 Afghan civilians have died. The numbers for dead Iraqis range from a low of102,000 to a high of over 1 million. Most agree that at least 2 million Iraqis and 200,000 Afghans have been displaced and are now in camps or living as refugees in neighboring countries, where they are allowed to stay until their money runs out. The infrastructure of Iraq, devastated by the years of U.N. sanctions followed by the U.S. invasion, has never recovered. Unemployment is over 15 percent, with considerable underemployment on top of that, and electricity and clean water are provided at lower levels than under Saddam Hussein. Development projects in both Iraq and Afghanistan have become money pits, with little to show for billions of dollars spent, thanks to corruption and sheer incompetence on the part of the government agencies and NGOs that administer the funds.

The dollar tag on the warfare is also hard to pin down. The actual appropriations for Iraq alone now approach a total of $1 trillion, but that number excludes legacy costs like paying interest on the money borrowed to finance the war and health care for badly wounded veterans of the conflict. Throw in the damage to the civilian economy caused by diversion of resources to war spending, and some estimates for the total cost of the war after all the bills are paid are as high as $5 trillion. The Iraq war is currently winding down only because the Iraqi government is unwilling to face considerable domestic opposition if it allows substantial U.S. garrisons to remain, but Afghanistan continues at a cost of $8 billion a month. President Obama would like to have everyone believe that the U.S. will largely be out of Afghanistan by the end of next year, but the generals foresee American involvement through 2015. The U.S. is spending annually three times as much to “defend” Afghanistan as the total gross national product of the country, hardly a sustainable situation and not at all suggestive of a possible handover to the Afghan army to “finish the job.” Only this week, there have been reports of high levels of desertion from the Afghan armed forces being trained to take over from ISAF.

And what would nation-building be if it were not expansionist, regularly finding new countries to remake? The U.S. has just completed phase one of its reshaping of Libya and will no doubt be involved in that unhappy land for the foreseeable future. And then there is the meddling in Yemen, Syria, Lebanon, and Somalia.

Another measure of the meaning of 10 years of constant warfare is the gain that has come out of the process. Iraq, which 10 years ago was an Arab bulwark against Iranian ambitions, is now not only not a fledgling democracy, it is hardly even Iraqi, given its de facto division into three communities: Sunnis, Shias, and Kurds. It is regarded by many as a virtual client state of Iran. And speaking of Iran, the U.S. invasion of two of the countries that it borders and the stationing of the Fifth Fleet in the Persian Gulf with headquarters in Bahrain has served as a powerful incentive for the rulers in Tehran to develop a nuclear weapon, if that is indeed what they are doing. The foreign threat has also given new life to the country’s theocratic rulers, enabling the mullahs to clamp down on their own reformers, claiming plausibly that they are agents of foreign powers.

Afghanistan might well qualify as the most corrupt country in the world, mostly thanks to the money poured in with little adult supervision as part of the U.S. nation- building project. Many observers believe that the Taliban will eventually return to government, so the principal objective for fighting for 10 years and spending billions of dollars is basically a fiction used to sustain the conflict while knowing that the result will be pretty much the status quo ante. The U.S. will not succeed in remaking Afghanistan in its own image and will surely leave some day. As in Iraq, the legacy will be unpleasant to behold. America will be hated and reviled by the local people.

And then there is nuclear-armed Pakistan. The United States has interfered in the country’s elections to replace a strong man with someone more “democratic,” has engaged in drone attacks that have killed numerous civilians and turned the people against both the government and Washington, and has engaged in tit-for-tat exchanges with Islamabad that have basically ended any form of cooperation. If there really is such a thing as the war on terror, its epicenter is in Pakistan, but Washington has succeeded in making that nation something approaching a failed state that is turning increasingly hostile. And don’t forget the nukes. Congratulations are due to Condi and Hillary and their bosses in the White House.

Finally, there is the question of what the Bush and Obama doctrines, which permit Washington to act preemptively anywhere and at any time, have done to the reputation of the United States. They have effectively trashed it. In the Pew opinionpolls, the United States “as a threat to world peace” is at the same level as North Korea and Iran. In key allies Turkey and Egypt, our favorable rating is 17 percent, and in Pakistan it is 12 percent . Fortunately, most foreigners are astute enough to realize that the problem is with the government in Washington and not necessarily with the American people, but they might be wrong in that assessment. Fed a steady diet of “military necessity” over the past 10 years, most Americans support constant armed intervention in other nations even if a growing minority does not. Yes, we have identified the problem and it is us. Beam me up, Scotty. It’s pretty bad down here.

So one has to conclude that the U.S. imperial project of the past 10 years has killed as many as 1 million people while displacing millions of others, has nearly bankrupted the United States with major costs still to come, has rendered the world even more unstable than it was in 2001, and has made Washington hated by nearly everyone nearly everywhere. It is difficult to find a plus side to all the activity unless one is a defense contractor or a government employee, because all the fun has also grown the government into a Leviathan twice as big and expensive as before. In short, there has been no benefit gained from the past decade even if the usual cheerleaders in the media predictably argue for and embrace an America continuously at war, insisting that “today, radical religious ideologies, new technologies and cheap, powerful weapons have catapulted the world into ‘a period of persistent conflict,’ according to the Pentagon’s last major assessment of global security. ‘No one should harbor the illusion that the developed world can win this conflict in the near future.’” That bumper-sticker view of the world and America’s persistent role in it ignores the fact that the interventionist policy itself is both a failure and a source of the instability, creating ever more enemies at great cost and resolving nothing.

Back at home, there have also been consequences. As Americans lose their jobs and homes, wonder what has happened to the Bill of Rights, and count soaring deficits promoted by an increasingly distant and unresponsive federal government, they might begin by asking what has gone wrong. Well, everything has gone wrong, and it all started with 9/11.

Tags: 911 Cost of war in Afghanistan Sept 11 the cost of war