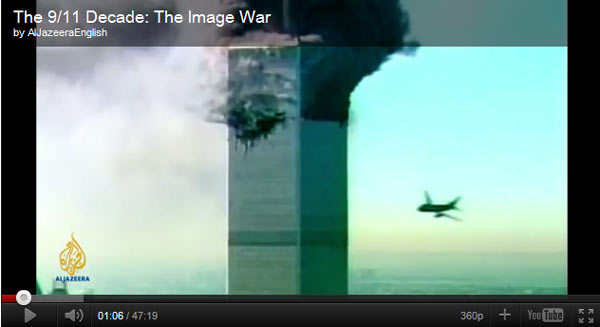 9/11: It was a PR stunt which killed thousands and launched a propaganda war that has, so far, lasted a decade.

Since then, the US and al-Qaeda have competed furiously to win ‘hearts and minds’ with elaborate media strategies. Spin, threats, lies, censorship, the killing of journalists; how far has each side been prepared to go to win the propaganda war?

In the ‘war on terror’ the exploitation of images was to become a matter of life and death, as both the US and al-Qaeda bombarded the world with media designed to win people over to their side.

It started with 9/11 itself: an act of terror staged as a global media event and the catalyst for a decade of propaganda war.

But al-Qaeda’s canny use of 9/11 imagery, which included saving footage of the attackers for release at a later date so as to maximise publicity, gave way to serious errors in judgement as the group’s use of beheadings not only terrorised viewers but also alienated one-time sympathisers.

The US, for its part, did not perform any better with Guantanamo Bay and Abu Ghraib becoming prime examples of how to lose a war.

And so, the image war goes on.