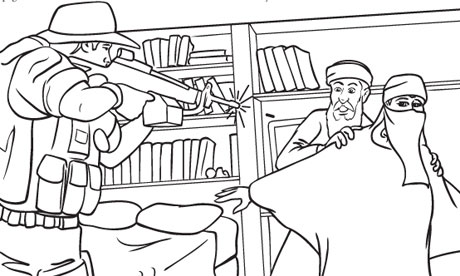 An image from We Shall Never Forget 9/11: The Kids' Book of Freedom

A colouring book about the events of 9/11, complete with pictures of the burning twin towers and the execution of a cowering Osama bin Laden for children to fill in, has provoked outrage among American Muslims.

We Shall Never Forget 9/11: The Kids’ Book of Freedom has just been released by the Missouri-based publisher Really Big Coloring Books, which says it is “designed to be a tool that parents can use to help teach children about the facts surrounding 9/11”. Showing scenes from 9/11 for children to colour in and telling the story of the attacks and the subsequent hunt for Osama bin Laden, “the book was created with honesty, integrity, reverence, respect and does not shy away from the truth”, according to its publisher, which says that it has sold out of its first print run of 10,000 copies.

One page of the $6.99 book, which has been given a PG rating, shows Bin Laden hiding behind a hijab-wearing woman as he is shot by a Navy SEAL. “Being the elusive character that he was, and after hiding out with his terrorist buddies in Pakistan and Afghanistan, American soldiers finally locate the terrorist leader Osama bin Laden,” runs the text accompanying the picture. “Children, the truth is, these terrorist acts were done by freedom-hating radical Islamic Muslim extremists. These crazy people hate the American way of life because we are FREE and our society is FREE.”

The Council on American-Islamic Relations has condemned the book as “disgusting”, saying that it characterises all Muslims as linked to extremism, terrorism and radicalism, which could lead children reading the book to believe that all Muslims are responsible for 9/11, and that followers of the Islamic faith are their enemies.

Ibrahim Hooper, communications director for the organisation, told the Toronto Star that “America is full of these individuals and groups seeking to demonise Islam and marginalise Muslims and it’s just a fact of life in the post-9/11 era”. Nonetheless, he expressed his hope that “parents would recognise the agenda behind this book and not expose their children to intolerance or religious hatred”.

Publisher Wayne Bell told American television that the book does not portray Muslims “in a negative light at all. That is incorrect. This is about 19 terrorist hijackers that came over here under the leadership of a devil worshipper, Osama bin Laden, to murder our people,” Bell said. “He [Dawud Walid, executive director of CAIR] calls the book disgusting … but he should call the people in the book, the 19 terrorists, Osama bin Laden, he should call him disgusting. This is history. It is absolutely factual.”

But Walid said that “given the fact that this is a very emotional and sensitive topic and that there were Muslims who were victims in 9/11 [and] who were first responders, we think it would have been more responsible if the language would not have been such that every time Muslim was used it’s radical, extremist, terrorist … All these characters are painted to the mind of a young person that perhaps all Muslims may be somewhat responsible for 9/11 or that Muslims are an enemy.”

Really Big Coloring Books, which also published a colouring book teaching children about the Tea Party last year, has said that it will donate a portion of its proceeds from sales of the book to Bridges for Peace, “a Jerusalem-based, Bible-believing Christian organisation supporting Israel and building relationships between Christians and Jews worldwide through education and practical deeds expressing God’s love and mercy”.