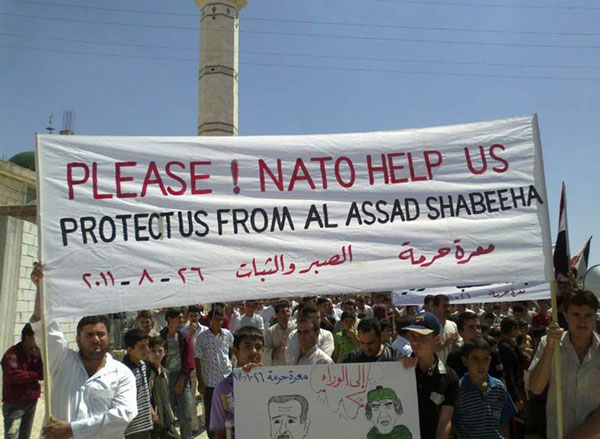 Damascus – Syria marked the end of a bloody, sombre Ramadan and the start of the Eid holiday yesterday with more deaths.

Security forces fired on protesters and killed at least seven, according to activists and human-rights groups.

There was also a fatality in Homs, human-rights groups said, and a man wounded in a mosque raid in Damascus on Saturday died from his wounds. With protests increasingly taking place at night, activists said the death toll was likely to rise by this morning.

There have been persistent anti-regime protests in Deraa and Homs during a six-month uprising that a security crackdown and promises of political reforms have failed to suppress.

Instead, as the crisis has continued, protesters have increased their demands. Where they once called for relatively minor reforms and an end to corruption, those taking to the streets are now insisting on nothing less than sweeping away the autocratic regime led by the president, Bashar Al Assad.

More than 2,200 have been killed in the violence, according to human-rights groups and the United Nations. A recent UN human-rights report said there was compelling evidence of torture, summary executions and shoot-to-kill policies against unarmed civilians by the Syrian authorities

During Ramadan, 551 civilians were killed, according to the Syrian Revolution Coordinating Union, a coalition of grassroots activists. It said more than 130 deaths occurred in a single day during a military assault on Hama, on the eve of Ramadan. Army offensives targeted a series of cities throughout the Islamic holy month, with Syrian officials insisting they are fighting foreign-backed Muslim terrorists. According to the government, 600 security officers have been killed and 2,000 wounded in attacks by “armed groups”.

That narrative was supported by a leading pro-government cleric yesterday during an Eid sermon in Damascus, attended by Mr Al Assad. Sheikh Bashir Ied Al Bari echoed the authorities’ claim to be the victim of a foreign conspiracy, and said Syria was being targeted by hostile western powers angry at its defiance of Israel.

“Such national stances have angered the enemies of Syria, who started to hatch unjust plots, and plant on the way of Syria’s progress seditions, lies and fabrications,” he said, according to Sana, the state-run news agency.

Those remarks belie deep fissures within Syria’s Islamic clerical establishment that have been exacerbated by the continued use of deadly force by security units during Ramadan and Eid. Attacks on mosques, including an assault by security forces on Al Rifai mosque in Damascus on Saturday morning, have further inflamed tensions. Osama Al Rifai, a well-respected moderate imam who has criticised the regime’s handling of the uprising, was physically assaulted during that raid, in which at least two worshippers were shot inside the mosque, according to witnesses.

Pro-government sources have suggested the attack was carried out by an armed group trying to incite violence, who managed to slip past the heavy security presence surrounding the mosque.

“There is more and more despair and anger among senior Islamic figures about the regime’s actions,” said one protester close to the clerical establishment. “There have been many cases of security blatantly trying to causes offence to Muslims. It as if they want to increase the problems and incite trouble, rather than solve it.”

Mr Al Bouti has been held in high regard in Syria since the 1980s but his support for the government crackdown has come at a cost, according to other leading clerical figures.

“The pro-regime clerics are not respected by the street any more,” said one influential Islamic scholar in Damascus. “They have no credibility left, they are defending the indefensible and no one listens to them, even their peers have all but severed contacts with them now.”

“Building on our sanctions targeting the entire government of Syria, we are bringing additional pressure to bear today directly on three senior Assad regime officials who are principal defenders of the regime’s activities,” the US Treasury under secretary David Cohen said.

Washington has already frozen all Syrian state assets inside the US, banned investment and exports to the country and halted imports of oil and gas from Syria.