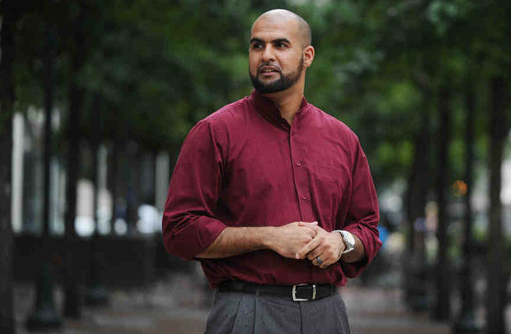 There’s not a woman in Philly who would rock a burka just to make a fashion statement.

But when it comes to Muslim-inspired menswear, well, that’s another story. Regardless of their religious affiliations, certain Philadelphia men, mainly African-Americans, have adopted the style of wearing long, old-world-style beards, sometimes pairing them with calf-length trousers and long shirts – all looks inspired by traditional Muslim attire.

For many, this convergence of hip-hop with Islamic style is purely a fashion statement and has nothing to do with whether a guy worships in a church or mosque. Some jokingly refer to non-Muslims who adopt this mode of dress as “asalama-fakems,” a play off the traditional Arabic greeting of “as-salaam alaikum,” meaning “peace be upon you.”

Whatever you call it, the Islamic-style aesthetic has been around for a while, and the beard in particular – often referred to as a “Philly beard” or a “Sunni” – has come to be identified with the City of Brotherly Love. My friend Anthony Henderson, the fashion stylist who divides his time between Philly and Los Angeles, makes a point of wearing it because of hometown pride.

“I can go to a corner store in Crenshaw or in Watts and people will say, ‘You’re from Philly,’ ” Henderson said. “And if I have to go to a new barber here in Los Angeles, I say, ‘I need a Philly beard.’ They automatically know what it is.

“I love my Philly beard because I think it makes me look attractive and sexy. People like to touch it and pull on it.”

Henderson’s chin whiskers are in a circle beard that connects his mustache with his goatee, and are darkened with hair dye that gives his beard Philly-esque definition. Barbers such as Darryl Thomas of Philly Cuts at 44th and Chestnut will use a dark wax pencil to give a sharp edge to the beard, a “serious outline.”

“We just put that razor on it and make it look real hot,” Thomas told me.

The most famous Philly beard-wearer is rapper Freeway.

“In college, we would often call it the Freeway beard, the Philly beard or the Muslim beard, also the West Philly beard,” said Ben Piven, who created a short YouTube documentary on the topic. “There’s a specific shaping to it, the way it puffs out around the cheeks and the sideburns and extends below the chin, definitely low in the mustache area in keeping with the Islamic style of facial hair.

To the uninitiated, the trend can confuse. When Adnan A. Zulfiqar, the Muslim spiritual adviser at the University of Pennsylvania, moved here in 2003 to study law, he would automatically give the Muslim greeting of peace to Philly beard-wearers, assuming that they, too, were conservative followers of Islam. According to tradition, devout Muslims trim their mustaches but allow their beards to grow.

“Muslims will wear the beard as a way to pay respect to the prophet Muhammad. Muslims believe that all the Abrahamic prophets wear beards,” Zulfiqar told me. “It’s a sign of piety. It’s a sign of religiosity, a sign that you’re trying to walk the path that the prophet walked.”

He added, “I think a lot of people in Philly do it because it’s become a part of the culture, urban culture in particular. It’s now part of Philly.”

Zulfiqar occasionally will be approached by a stranger who compliments him on his facial hair by saying, ” ‘I like your Sunnah.’ ”

“Sunni” is derived from the term Sunnah, which is Arabic and generally refers to the practices or ways of the prophet Muhammad. Police dispatchers can be heard on police scanners describing suspects as wearing “Sunni” beards.

The so-called Philly beard has been growing in popularity with non-Muslims since the mid-’90s, according to Mark Lightfoot, owner of the Philadelphia Hair Co., 5805 Germantown Ave.

“It probably started out as a fad, but it’s not dying down,” said Lightfoot, who’s also a barber. “If it’s 10 people I do, it’s probably six or seven of them that get it.”

The popularity of the beards is a sign of how mainstream Muslim culture has become in Philadelphia. Another example is the style of wearing pants cropped to an above-the-ankle length. During ancient times, certain Muslims would allow their clothing to drag on the ground as a sign of extravagance or to demonstrate their wealth.

“More conservative Muslims believe your pants shouldn’t be below your ankles because it’s a sign of arrogance,” explained Zulfiqar, who’s working on a doctorate in Near Eastern languages and civilizations. “The prophet was, like, ‘No. You have to be simple.’ ”

Given the number of Muslims in Philadelphia, this look is likely to endure.

But the beard? Like a lot of women, I much prefer a little chin stubble to a full-face beard. I asked Thomas of Philly Cuts if he thinks that the Philly beard will ever go out of style, and he laughed.