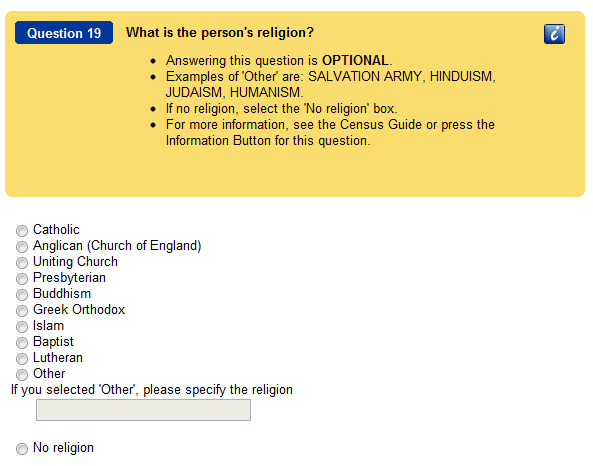 Dear Brothers and Sisters in Islam,

The 2011 is set down for 9th August 2011. As the Muslims Australia (AFIC) President I urge the Australian Muslim community to participate in the 2011 Census. This will provide an accurate evidence of Australia’s population, in particular the Muslim community.

The participation in the Census is essential to provide the correct evidence as to the number of Muslims. This will help determine our representation in politics at Federal and State level as well as how the governments (Federal and States) funds are spent in the planning and location of services and allocation of resources for the Muslim community. Equally important, this will also assist businesses and the private sector in their engagement with the Australian Muslims. Thus, I cannot stress to you how extremely important it is to fill in the Census form completely and correctly.

When you get your census form please answer all questions correctly – remembering to mark ISLAM as your religion and include everyone in your household. Behind all those numbers are real lives and real life stories and when you put them all together you see the patterns emerge which are what is used by the respective government and non-government agencies.

In a democratic country like Australia, numbers are very important and the Muslims need to have their numbers documented officially in order to safeguard our interests. This is a profoundly important issue if Muslims want to be included in the government provided facilities.  It is now time for the Muslim community to stand up proudly and be counted and for individual Muslims to do their part by identifying themselves as Muslims on Census day.

Confidentiality of Household and Individual Information

Some Muslims in previous census, because of their past experience, have not provided accurate information about their ethnicity and more importantly about their religion, which has disadvantaged the greater Muslim community. I have been assured that the information collected is treated by the Government with great care and kept strictly confidential and the identifying data is destroyed within weeks of the actual census date.  Any doubts about abuse of personal information are completely unfounded as there are strict rules about the handling of the personal household and individual information.

Whilst concerns about identifying oneself as a Muslim during the present climate of heightened tensions is understandable, I would assure all Muslims that this concern is ill founded, at  least when it comes to the census data. But there is a lot to be gained by the community with a true representation of the Muslim population in the country.

The Australian Ummah is now at a very pivotal point in this great nation therefore we cannot ignore to engage in this Census process. The Federation prays that 2011 Census will reflect a more accurate picture of the numbers of Muslims in Australia with our cooperation and participation in this vitally important exercise.

If we look at the results of the recent federal election, as well as the Victorian election , and how close some of the seats were, it is obvious that any particular group could have influenced the outcome of the elections. Whether it is the young voters, the women, the environment protection lobby groups, particular ethnic groups (as per the ousting of former PM Mr John Howard) or religious groups. My argument is that if Muslims are correctly represented through the census, then they could demand and obviously get more respect and engagement  from the political parties, councillors and all aspiring and sitting politicians. As you would all appreciate, in a democracy, it is a numbers game.

Please feel free to contact Muslims Australia offices, one of the Executive Committee members, State Council Chairman or me directly.